Fantastic Four is not as bad as some of the more descriptive reviews would have it. But it really isn’t good.

You might get the impression that I don’t like a lot of movies, but that is not true. The Avengers was amazing, and showed how it should be done. Ian McKellan’s Mr. Holmes was essentially flawless. Ex Machina was thought-provoking. Even Ant Man was solid entertainment.

I didn’t want to trash Fantastic Four, to jump on the bandwagon of negative reviews. So I thought it over, looking for what it did right. Unfortunately, there are precious few aspects of it to praise: the cast was good. Some of the effects were pretty cool, especially the interdimensional travel. Doom was imposing with his fused metal skin and tattered cloak. The young Reed and Ben were cute. However. However.

We all know about the internecine conflicts between the studio and the director, and by some accounts the director and everyone else. But instead of parsing the conflict and placing the blame, let’s just look at the results.

Fantastic Four was another barely adequate movie, oddly disconnected from its audience and itself, hampered by a script littered with trite pep talks and an inflated sense of its own melodramatic tension. The pacing was a real issue. So much time was spent in exposition that the ending felt rushed and incomplete.

And the exposition was so much about setting up the planned second movie that they forgot to make this Fantastic Four actually about anything. There were no characters substantial enough to care about, no discovery or threat unveiled in such a way as to invest the audience in the outcome. Even the big reveal of Dr. Doom was a deus ex machina, tacked on seemingly to showcase more of the second-earth CGI. 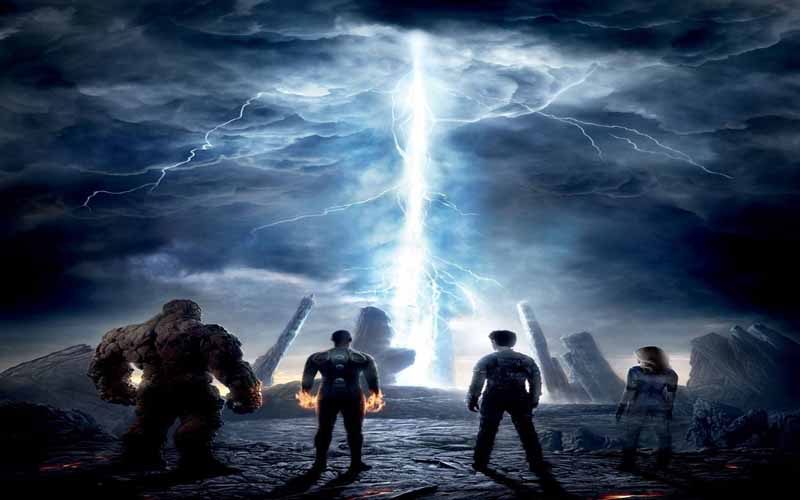 The script had some initial potential that faded into simplistic, self-important, heavy handed presentation. The demands of getting to the end of this installment overshadowed any concern for believable or even consistent characterization. The reasonably funny jokes were infrequent and unintegrated—Fantastic Four lacks the sense of humor that makes other Marvel movies engaging. Let’s face it, even Thor is funny, and he’s a god. The occasional profanity also seemed tacked on, as if only to avoid a G rating.

The actors have the unfortunate chore of being late-twenty-somethings playing high school students. They all seemed fully capable of delivering coherent performances, yet they were working with an unwieldy story that cared nothing about them.

As the future Dr. Doom, Toby Kebbell gave hints of what could have been. His smirk suggested the ability to breathe some life into a limited character. Doom’s killing method—going all Scanners on people–was jarring for being the only gore in the film. It could have been effective if Doom’s bitter reasoning made any sense.

Jamie Bell as Ben Grimm showed similar capabilities as a performer, and was just as trapped by the material. He brought a touching intelligence to his monster. The most human scene in the whole concoction was when Reed asked Ben whether his transformation hurt. Ben’s answer was simply “I’m used to it.” More moments of vulnerability like that would have done wonders in making the characters matter for the audience.

Alas, there was no chemistry between any of the characters, romantic, platonic, or familial—relationships were stated but never felt. All their motivations and decisions existed without any relatable frame of reference, because the plot had to reach a certain point to set up the sequel. This could only manifest as a profound lack of character development. The result left us with scenes of the defiantly rebellious Johnny becoming a team player at the drop of a hat, and the U.S. military immediately caving in because Reed Richards and company don’t want to play anymore.

Making the characters recent high school graduates also weakened the film. They may be geniuses, but handing them a government facility was awkward and unbelievable. They haven’t earned it. And anchoring the action so firmly in time—2007—allowed the audience to evaluate the real-world technological components and make continuity checks. The movie isn’t strong enough to brush off that kind of scrutiny.

To summarize: The script was an exercise in blunt-force exposition. There was no discernible character development, hence very little reason to care. The ending seemed to belong to a different movie entirely—the 2017 sequel we are threatened with, to be precise. And by making the Fantastic Four teens at the outset, the movie appeared to be grabbing at the coattails of the YA dystopian juggernaut. See recent high-school grads invent interdimensional travel! See them harness incredible powers! See them oppose the establishment, and win!

I’d like to see a Fantastic Four I could care about. This certainly wasn’t it.