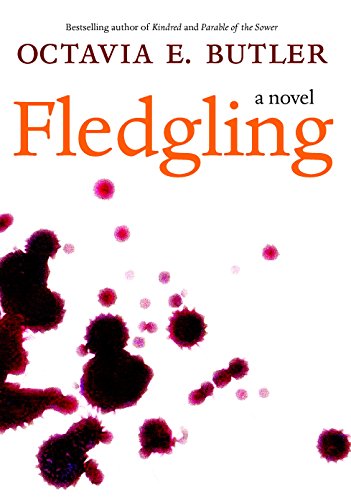 Fledgling, Octavia E. Butler’s final novel, is a disconcerting read that takes on vampires, racism, and cultural creation myths in one long gulp. Told entirely from the viewpoint of an amnesiac child of a symbiotic species, Fledgling challenges the reader to accept an alien physiology and culture and its unusual intersections with human lives. While imperfect and at times jarring, it still has vital points to make.

Butler’s version of the familiar vampire is faithful to the folklore without embracing the supernatural. Her blood-drinkers are the Ina, an ancient, separate species that are not simply predators. The Ina are nocturnal, photosensitive, and long-lived, and do require human blood to survive. But the Ina need their humans alive and healthy, for more than just food.

The connection between Ina and humans is complex and symbiotic, with the depths of it only partially revealed over the course of the narrative. To ensure a steady food supply, Ina bind chosen humans to them using the venom in their bites. After several such bites, a human becomes physically dependent on its Ina and will die if separated. The Ina’s bite also confers exceptional health and extended life on the human recipient. In return, the Ina requires an intimately physical, as well as nutritional, relationship.

Part of what makes Fledgling so intriguing to me is its in medias res quality. It begins with a mystery, and ends with potential about to be tapped.

The novel is the story of Shori, a genetically altered Ina whose very existence is considered an abomination by certain other Ina families. Shori’s mothers, skilled scientists, inserted human DNA into the genetic code of Shori and her siblings with the hope of giving them the ability to withstand the sun and to function during the day–and to be able to pass those traits on to their own offspring.

Fledgling begins with Shori awakening without her memory, a result of an attack that wiped out her entire maternal family–mothers, grandmothers, and sisters, as well as all their symbiots. When she finds her paternal family, they are assassinated as well. The rest of the novel is Shori’s ongoing recovery and relearning of Ina culture–and how her existence threatens to change it– in order to bring her family’s murderers to justice.

A great deal of information is funneled to the reader through Shori’s inquiries and explorations. We learn along with her that Ina culture is an intricate thing, with social, sexual, and symbiotic norms that predate humanity’s by millenia. Her amnesia is a fine tool for all the exposition, and is balanced with enough recovered knowledge to keep her from being simply a babe in the woods and her relearning merely an info dump. Shori knows things. She doesn’t always remember that she knows them.

Shori is revealed as an ethical, caring keeper of her human symbiots, with no memory of having learned ethics. But even though she tells her own story, Shori remains at a distance. She is, after all, not a human, as much as she may resemble one.

Which brings me to my visceral discomfort with the novel.

Shori appears to be a prepubescent child, but that doesn’t matter to our Ina heroine or the twenty-something man she first feeds from. He wants to have sex with her, and she is happy to have him. She and her human symbiots engage freely in mutually consensual sex throughout the novel, with varying levels of euphemism to explain it. But the frequent descriptions of Shori as “a lovely little thing”, and the desire of multiple adult males to pull her onto their laps is far too reminiscent of Lolita for me.

While objectively it shouldn’t be an issue for a 53 year old child of an unrelated species to have sex with an adult human, from this adult human’s perspective it feels very wrong.

Ocatvia E. Butler died too soon, and Fledgling strikes me as a beginning to something that would have been larger if she had enough time. The novel is transgressive and open-ended, with the poisons of racial purity and prejudice laid out in clear and unsentimental language. In the end Fledgling left me unexpectedly and deeply uncomfortable. But I still wish there were more of the story.