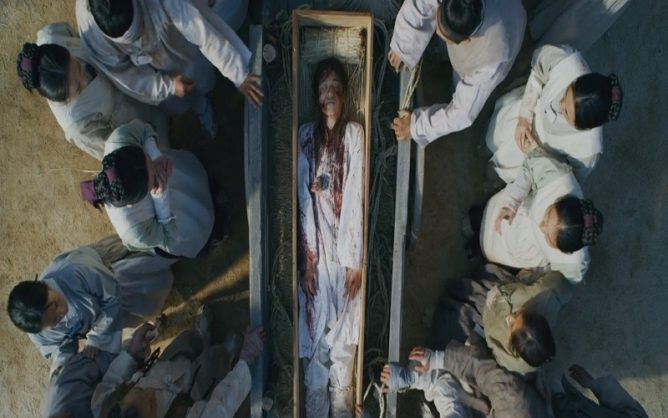 My relationship with zombies is conflicted. I find the whole zombie genre fascinating, but also too scary to indulge in very often. I never could watch The Walking Dead. But Kingdom, the new South Korean series streaming on Netflix, definitely has my attention.

Set in Joseon Korea sometime in the later Middle Ages, Kingdom is as much a sweeping historical costume drama as a horror series. The zombies here are called simply “monsters”, and despite the medieval setting they are approached with scientific rigor. The reason they exist is known. Their capabilities are being observed and noted. Variations in how the infection is transmitted are recognized. And the race is on to find the cure before they overwhelm the nation.

Giving a new twist to the old saw “a fish rots from the head down”, Kingdom’s threat begins at the top with a weak king and a treacherous minister willing to use unnatural tactics to gain power. The first words spoken in the series are “You must never look inside His Majesty’s bedchamber,” and they serve as a warning of both the political consequences and the supernatural danger involved in disobeying. But what is inside soon escapes.

As so often happens, the poor bear the brunt of the suffering that follows. Starved by war and heavy taxation, the peasantry have resorted to cannibalism to simply survive– an act of desperation that allows a new disease to spread with terrifying speed. The noble classes think they can outrun the disease, or wall it away.

We all know how that goes.

Kingdom is beautifully shot, with dramatic lighting and fierce action, serene architecture and monumental landscapes. It’s plot is elaborate, full of court intrigue, dynastic jockeying, and the scars of a recent war. The characters are well-acted and of all the familiar types, with a brave prince, a scheming nobleman, a loyal warrior, a smart and plucky woman, and a mysterious man drawn into the fray. And, of course, ravenous zombies. It is compelling stuff.

Kingdom’s first season ends, expectedly, in a cliffhanger. Season two is already in production. As long as the zombies don’t get too rotten, I’m ready.