Bobcat Goldthwait’s Misfits &Monsters is, not surprisingly, pretty strange. Goldthwait–a man known for his incredibly dark sense of humor– writes, produces, and directs the new comedy series airing on TruTV with a fully self-aware sense of the absurd. So far, the half-hour episodes play more like Tales from the Crypt than the Twilight Zone. Foul language abounds, blood flows freely, and even the background characters are scathingly cynical. Truly, there is something for everyone.

It Begins With Bubba 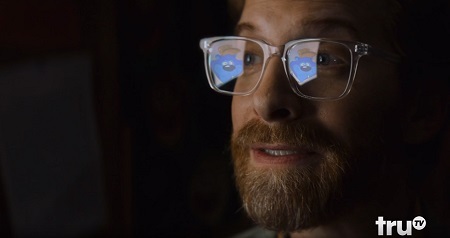 Seth Green is not a werewolf in this show

Misfits & Monsters begins its run with “Bubba the Bear”, a fairly standard tale of a children’s cartoon come to life. Seth Green (Robot Chicken, Buffy the Vampire Slayer) stars as a mild-mannered voiceover actor whose work comes back to bite him. Bubba the Bear is the role he inherited when the original voice actor had a breakdown and was institutionalized. But Bubba isn’t happy with how he is portrayed, and breaks into the real world to make his point. Graphically.

The episode’s dialogue is at once predictable and surprisingly, deeply snarky. Confronted by Bubba, Green’s character justifies his work with,“Stuttering’s just a tradition…like Porky Pig, Daffy Duck, Hugh Grant.” And when Bubba comes for revenge, he declares it “time to get all Revenant on your ass.”

“Bubba” ends exactly as you expect it to, which is quite all right. 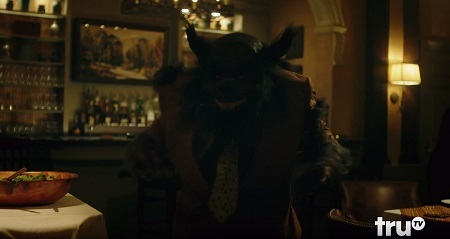 The second episode is “Face in the Car Lot”, a 1970s-set extravaganza of politicians and other creatures of the night. Starring David Koechner (Anchorman, The Office) as car-salesman turned presidential candidate Del Wainwright and Tara Lynne Barr as the plucky reporter trying to prove he’s a werewolf, this episode plays like an extended comedy sketch.

When asked what scandals may come up during the campaign, Wainwright confesses, “I ate a toddler once. When I was a werewolf.” This is not enough to derail his campaign–not by a long shot. A hippy vampire shows up with evidence of the crime, but  the political machine just keeps rolling. Many of the lines are lifted almost verbatim from current commentary, tweaked lightly for lycanthropy. It is at once enjoyably silly and quite uncomfortable to watch.

There are six more episodes to round out the first season, but TruTV doesn’t give viewers the opportunity to binge. Which, based on the first two installments, I totally would. What I’ve seen so far of Misfits & Monsters is refreshingly goofy. The show is smart enough to be interesting but not so full of itself to wear out its welcome. The stories presented thus far are pretty standard, with the plot twists broadcast early on. But Goldthwait still gives them enough of a snarky twist to make their conclusions funny and satisfying anyway.

I would have to categorize Misfits & Monsters, broadly, as familiar tales well-told. And I look forward to more of that in the rest of the season.