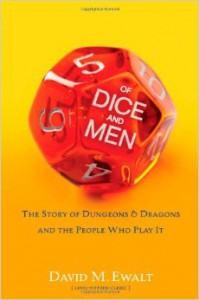 Revisiting another blast from the past

Of Dice and Men

The Story of Dungeons & Dragons and the People Who Play It

Back in 2013, when David Ewalt’s Of Dice and Men came out, I had not played Dungeons and Dragons in probably twenty years. I had no expectation of ever playing again, and only picked the book up out of nostalgia for my misspent youth. But by the time I got around to reading it, I was back in the game and stumbling my way through a new campaign, bolstered mightily by the mercy of some friends who had never stopped playing. Let’s face it, David Ewalt speaks true when he says that “the system encourages long-term engagement, and its one reason why D&D fans are particularly devoted to their hobby” (96). Somehow, despite growing up and assuming our adult responsibilities, a great many of us cannot say a permanent goodbye to D&D.

“The people you play games with become your clan.  They share your experiences, know your strengths and weaknesses, and help protect you from a dangerous world.” –David Ewalt, Of Dice and Men

Ewalt describes a similar trajectory for himself, and uses that as the peg to hang his narrative on. A substantial amount of the book is illustrated with passages describing Ewalt’s reintroduction to the game, his fellow players (including both their real-world jobs and their characters’ professions), and his current, ongoing campaign. Much like Shakespeare, these passages play a whole lot better than they read. This is not his fault, nor is it a criticism. D&D, no matter the version in use, is meant to be lived.

Ewalt’s style is light, quippy and a little snarky (“D&D scenarios are the microwave dinners of the role-playing world” (100)), but he covers a lot of ground. He starts his journey with a brief history of chess and that game’s evolution into progressively more elaborate war games—from strategy-based systems to miniature-fueled reenactments. He outlines the development of a scattered historical gaming community brought together at conventions. And then he introduces us to the young Gary Gygax, who was deeply into historical gaming before he discovered the joy of gaming and turned it into his life’s work.

Ewalt also gets into the politics behind the scenes of the game at TSR, the personal and business conflicts, the royalty issues, the copyright infringement cases (both by and against TSR and Co.), and the creep toward mainstream popularity and mass-market merchandising that might ring a little strangely for the hard-core among us. He includes the financial mishandling and collapse of TSR, Gygax’s death, and the survival of D&D through its purchase by Wizards of the Coast. Of course, all this is all related in the same adventurous tone as his campaign recollections. It goes down easy.

He even touches briefly on live-action role playing, but until he needed to research it had never done it, and sees it as something ‘other’ than a traditional RPG. The friends I had who were involved in LARPs did not do tabletop games, so Ewalt may be on to something, there.

And because you cannot discuss D&D without it, Ewalt reviews the dark time in the nineteen eighties when the game and its players became synonymous with the seduction of black magic and insanity. This particular slice of awfulness was served during my prime playing days, when Tipper Gore and other parental McCarthyites became determined to save us all from the overblown, misunderstood, and purely imaginary dangers that RPGs and heavy metal music were blamed for promoting.

As a player himself, Ewalt understands very well the group dynamics that are the heart of the game. He describes familiar personality types that just don’t fit anywhere, even in the odd assemblage that is a gaming group. But he also describes quite vividly the emotional bonds that hold even the prickliest mix of players together: “even when a game is over, the bonds that have been created persist…The people you play games with become your clan.  They share your experiences, know your strengths and weaknesses, and help protect you from a dangerous world” (119).

To sum it up: Of Dice and Men is a light yet reasonably comprehensive read written by a person who loves Dungeons and Dragons and always has. Ewalt hits most of the major points of the game, its major contributors, and its development without ever bogging down or preaching it. If you want a refresher course in why you also love playing D&D, this may be exactly the book for you.