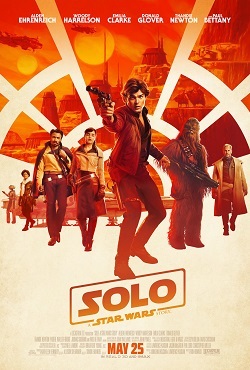 Solo: A Star Wars Story is polished and sleek, a fine demonstration of the well-oiled machine that is Disney. The cast is talented, the effects bright and shiny, the story exciting enough if a little too long. But I think Solo would have been so much better if it weren’t about Han Solo at all.

Solo is amusing, but it doesn’t offer any substance. It’s just lightweight summer fare–superficial and forgettable. This is no sin for a summer movie, but as an addition to the Star Wars franchise it should offer something more. Solo: A Star Wars Story has nothing to emotionally invest in–and that is the fatal flaw. The core saga gives us characters we can care about–passionately. This second outing into A Star Wars Story-land can put on the trappings but lacks the foundations.

It’s too determined to show us all the references from the original trilogy. While it’s fun to see Han meet Chewie and Lando, the familiar scenes can’t carry the whole movie.

The dialogue is often simplistic and obvious. And yet despite all the exposition, there is no insight into how Han Solo developed into the reluctant hero we know and love. We have only the overemphasized statement that he is a good guy. This shortcut reduces him to a cartoon cowboy and not much else.

This is not the scruffy nerf-herder we’re looking for

Solo largely suffers from the same problems that bothered me in Rogue One–good actors with far too little to work with.  While entertaining in the moment, this is not a movie I will go back to. There is no emotional growth here–Solo’s Han is, was, and always has been. Why should we care about his backstory? 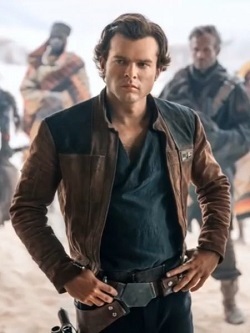 Alden Ehrenreich is the younger Han, and he is genuinely likeable in the role. But he seems to be doing nothing more than a broad imitation of Harrison Ford’s smirk and swagger–and I know Ehrenreich is capable of better. And while young Solo should resemble the older character, it’s really hard to watch Solo: A Star Wars Story and not wish they had just CGI’d in Harrison Ford.

Emilia Clarke is also likeable as Qi’ra, but she fails to convey any heat with Solo or any cold calculation with Dryden Voss. She’s sweet, and we are told she is dangerous. Her threat just doesn’t come through.

Lando Calrissian is a wasted character, for all Donald Glover’s suave moves. But Glover gets points for showing more emotional connection to Lando’s droid, L3, than Han does to Q’ira.

Woody Harrelson’s good-natured performance as Beckett can’t save his character from being a straight-up plot device. It’s particularly galling when Beckett’s death is milked mercilessly to show that Han really is a good person, even when he shoots first.

Paul Bettany as Dryden Voss is probably the most believable actor in the film. Bettany brings a certain convincingly dangerous psychopathy to his crime lord, and is lucky enough to simply be killed in combat. And Thandie Newton’s Val is a brief, pleasant surprise who is also allowed to die with her dignity intact.

Solo: A Star Wars Story is ultimately, for me, an empty suit of a film that puts well-known characters through predictable paces with no payoff for either them or a nostalgic audience. Which is a shame.

A New Hope, The Empire Strikes Back, and Return of the Jedi created many, many lifelong fans. Sixteen years later, the next trilogy introduced another generation of fans to the Star Wars universe. And now we have Episodes VII and VIII, with IX on the horizon, and maybe we should let the current generation become enamored of their trilogy in peace.

So perhaps that’s the deeper meaning of Solo hidden in the gravity well: it’s time to finally let Luke, Leia, Han, and Obi Wan rest, and let the saga continue without constantly looking backward for slick, flashy, and forgettable content fill up space.