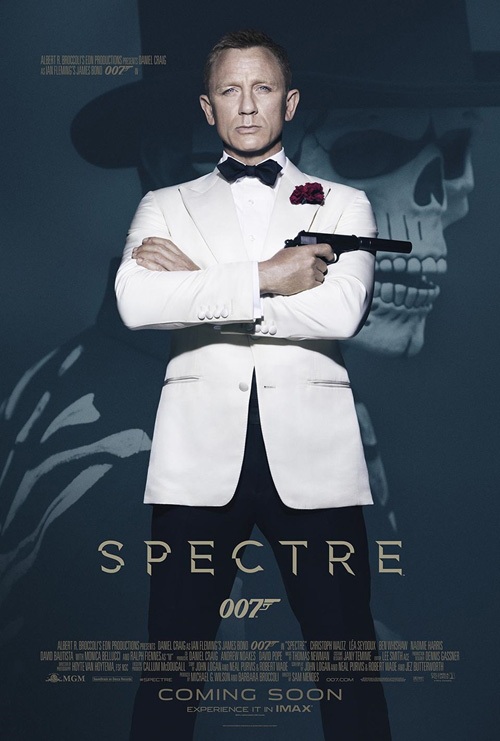 Spectre is a fine, glossy addition to the James Bond canon. It has all the elements we’ve come to expect from the franchise, executed flawlessly. It has wit, and intelligence, and brute force. And it once again has Daniel Craig filling the precisely-tailored suit with his animal physicality.

In terms of stunning visuals and sweeping, breathtaking action sequences, Spectre is at the top of its game. From the long opening shot of Bond walking Mexico City’s rooftops above the Day of the Dead celebration to the fantastic car chase along and into the Tiber in Rome to the over-the-top finale in London, it is absolutely riveting. Between the explosions the pacing is impeccable. There is not a hint of slack over the two and a half hour of running time.

And as in the previous Daniel Craig Bond films, Spectre gives us more than just the dizzying ride.

Spectre brings Bond’s ghosts with it. While some of the echoes are nods to the fans (the Aston Martin, a throwaway reference to Pussy Galore), most of them seem to be there to expand on the themes from Skyfall. Spectre’s Bond is an aging hero among aging heroes and eager new blood. They all have a vital place in the world, but the young turks are having a hard time recognizing it and the old guard are still wary of the pace of change.

So it is fitting that Spectre’s super-villain is disguised as Big Information with all its threats and promises, and brandished by the coy and slimy characters of Franz Oberhauser (Christoph Waltz, slightly amused and dangerous as always) and Max Denbigh (Andrew Scott, as a less-mad version of his Moriarity). Their relentless muscle is played with great menace by David Bautista.

Bond’s familiar support crew is filled out with cool righteousness by Ralph Fiennes as M, Naomie Harris as Moneypenny, and Ben Whishaw as Q. They are all directly involved in the action on this outing, keeping satisfyingly with the theme of finding the balance between the old and the new.

That theme is less-well executed with Bond’s love interest. I did not get a lasting impression of Lea Seydoux’s Dr. Madeleine Swann. While beautiful and competent, she exists in the shadow of Vesper Lynde. The room in the L’Americain Hotel in Tangier is a visual reminder of the Venetian hotel room Bond shared with Vesper in Casino Royale. The dinner on the train was reminiscent of another dinner scene, as well. The point is driven home more directly when Bond finds the hidden file with Vesper’s name on it. Vesper even appears in a photograph.  While evocative and important to Bond’s character, it is difficult to establish a new romance under that shadow.

Spectre also repeats the parental and sibling-rivalry dynamics from Skyfall, this time between Oberhauser and Bond. That, even more than the raw lust for power, drives the conflict. The villains, the heroes, the love-interests—these people are all damaged and struggling to get past it. There is less banter here, less flirtation, less grandstanding. Among the gorgeous spectacle that is a Bond film, there is a need to confront old hurts and try to lay the past to rest.

What this comes down to is that Spectre continues the recent tradition of a James Bond who is maturing as well as aging, a hard man learning how to own the life he has lived. It drives home the fact that he’s got depth to go with the danger and makes for a more interesting hero with more interesting enemies.

And, of course, it does it all with the exhilarating chases, exotic settings, insane technology, and incredible fashion sense that define James Bond. Go see Spectre. You won’t regret it.