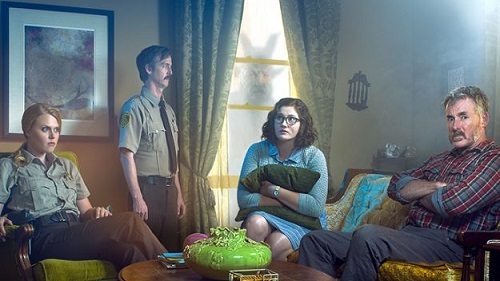 Not quite the Scooby Gang

Stan Against Evil came back for a third season on Halloween night, and boy, am I glad. The enthusiastically silly and low budget show continues to be a bright spot on IFC’s schedule. It has embraced its humble status and run with it, cementing its place as a goofy and sometimes sweet horror comedy well worth watching.

The show still looks as if all the special effects come from Party City. It still careens cheerfully from one joke to another with only a nod at coherence and character development. But I can’t hold that against it. Because Stan Against Evil is still escapist fun with an occasional dose of sentimentality, and the cast pulls it off without missing a step.

Former Sheriff Stan Miller (John C. McGinley) and his replacement, Evie Barret (Janet Varney) have become the best of friends, with his curmudgeonly snark nicely balanced by her occasionally off-kilter practicality. Deputy Leon (Nate Mooney) is more loopy and oblivious than in season’s past, but is still a core team member. And Denise (Deborah Baker Jr.), Stan’s daughter, still presents as a thirty year old going on thirteen, crafting, fan-girling, and inappropriately attaching at every turn. Her romantic interest from season two hasn’t reappeared yet, but the season is young. Evie’s daughter, never being much more than a prop, has pretty much disappeared from the show. But Evie’s boozy ex-husband seems to be a recurring character when a random monster is needed to give a plot a boost. 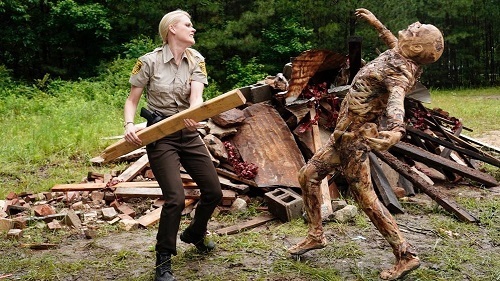 Romero would be proud

The overarching storyline from season one remains in place: Tiny, rural Willard’s Mill, New Hampshire is cursed. Back in 1693, the evil Constable Eccles burned 172 witches at the stake. Since then, every constable the town has ever had has died in office. Except Stan. Stan Against Evil’s unexpected second season introduced a lot more information about Stan’s late wife and her coven, the Black Hat Society, who protect the town from the worst attacks by Eccles and other evils. And now the even more unexpected season three has the crew still fighting off demons as Constable Eccles’s victims keep returning to exact revenge. Stan is still trying to find a way to bring his dead wife back to life. And the writers still keep everyone off-balance and well-armed with one-liners. 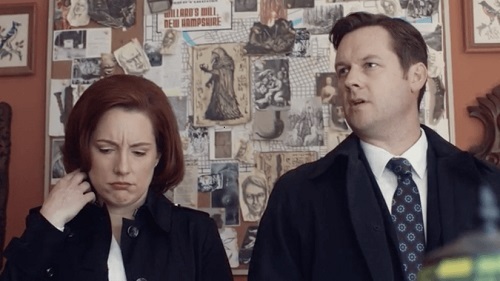 Nobody wants to believe

Stan Against Evil launches into the new season with its usual verve. Episode one features an undead Stan and an institutionalized Evie in their own private hells (which look remarkably like someone just threw garbage around in the street), learning to work through issues together. There is a bit of random time travel, and some wonderful bedside manner from the resident psychiatrist. Episode two features lessons in how to use evil for the greater good, a knock-off Mulder and Scully, and even Kolchak running around snapping pictures as Stan and Evie try to figure out how most of the Black Hat Society died. Apparently, bringing your own rubber gloves is important in investigations.

Each season is only eight half-hour episodes broadcast over the course of four weeks. A few episodes are free on IFC, and seasons one and two are available for binging on Hulu. I highly recommend it. Stan Against Evil is a far better treat than leftover candy.