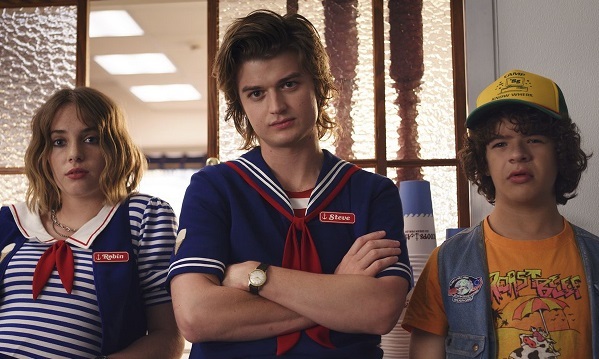 The best of the bunch

Stranger Things 3, which dropped on the 4th of July, turned out to be a letdown for me. It lacks the charming nostalgia and sure hand of the earlier seasons. While the show did pick up steam by the fourth episode, I think overall this season is the weakest of them all.

The episodes are wildly uneven in tone, and don’t seem to know who the adult characters are supposed to be. They are demoted to cartoons, mugging for the camera and overacting all over the screen, only occasionally coming into focus. Especially egregious, to me, was the waste of talent in casting Cary Elwes as the evil mayor just to have him chew up the scenery.

The younger characters are handled with much more nuance. They have matured, and for the most part behave naturally (although in one scene, Mike is so blatantly mouthy toward Hopper I’m surprised he didn’t get smacked into next week). The Steve/Dustin friendship dynamic is wonderful, and I would joyfully watch a spinoff with just those two. As new characters go, Robin* is outstanding, as is (after a prickly start) Erica.

Unfortunately, Stranger Things 3 seems like a money-grab to me, especially after the strong and satisfying arc of Season 2. While enough loose threads are left hanging for a fourth season, I truly hope they let Stranger Things lie.

Los Espookys, in all their glory

On a brighter note–while Stranger Things seems to have run its course, Los Espookys is just getting started.

Los Espookys is HBO’s new mostly-Spanish-language comedy about a group of Latin American friends who create horror effects for a living. It is a sweet, silly, delightful show. The small and talented cast includes Bernardo Velasco as the group’s cheerful leader, Renaldo; Julio Torres as Andrés, the wealthy heir to a chocolate empire; Cassandra Ciangherotti as Úrsula, the brains of the group; and Ana Fabrega as Úrsula’s simpleton sister, Tati. Fred Armisen plays a small but pivotal role as Renaldo’s Uncle Tico.

While the monsters and supernatural goings-on thus far are all stagecraft, there are hints of real spooky things happening, as well. Andrés displays some magical abilities that may or may not be real. The gorgeous host of a popular television program may be under a hypnotic spell. And the blonde party girl we meet in episode one seems to work for a mysterious government agency.

Los Espookys is not technically a horror comedy, but it plays one on TV. It is a thoroughly charming bit of silliness to help pass a hot summer night.

*For some reason, I decided to rename Robin as April. She looks like an “April” to me, but the correction has been made.

2 thoughts on “Stranger Things 3 & Los Espookys: Weirdness All Around”