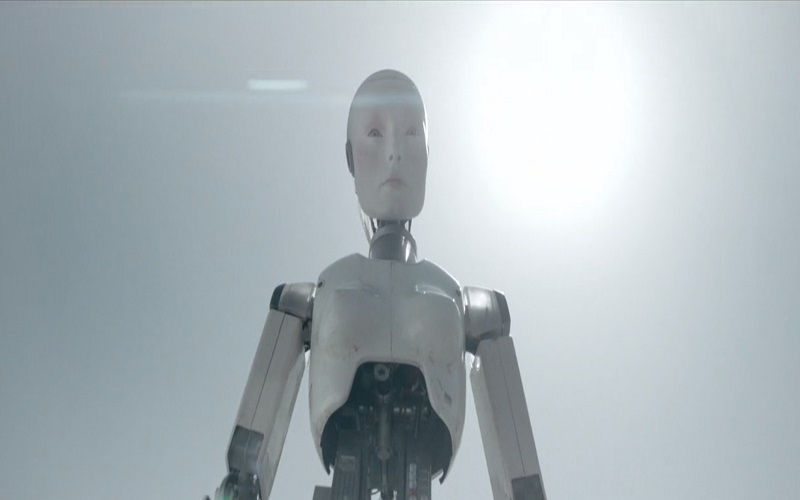 Chappie came out in March, 2015, and its trailers looked gritty and funny and sharp. Writer/director Neill Blomenkamp had expanded the concept from his 2004 short Tetra Vaal into a full length movie. But the reviews upon its release were not encouraging. It earned only 30% on Rotten Tomatoes and 41% on Metacritic. Audiences liked it more than critics did, but opinions were still roundly mixed. I wrote Chappie off as one of those movies I might watch when it got to cable. Maybe.

Then, I spotted this on Twitter from Wiliam Gibson: “Taint of Disneyfication is exclusively from Sony’s excruciatingly misguided marketing. If Chappie‘s not cyberpunk, nothing ever was.”

I have great respect for William Gibson. If anyone knows what is or isn’t cyberpunk, it is him, and he has been vouching for Chappie since its initial release. So, I watched it. And while I understand some of the negative critical reactions, I also fully understand why Gibson got behind it with the weight of his authority. Despite any flaws in the filmmaking, Chappie is an eloquent, moving, hopeful movie about what makes us who we are.

Chappie happens in that space which Gibson loves so well, the intersection of society’s grey economy fringe-dwellers and its ubiquitous hi-tech. Cyberpunk is defined by this crossing of paths. The rich fund the technology, the disenfranchised steal and adapt it. In keeping with that, the character of Chappie begins his days as a police robot, the apparently sole product of Tetravaal Corporation. The robot is acquired by a desperate gang of abandoned-factory dwelling outsiders and his new awareness molded to support their criminal plans.

This is the barest frame of what drives Chappie’s action. The story, though, is of much wider and deeper scope.

Chappie is portrayed engagingly through voice and motion capture by Sharlto Copley. Chappie’s maker, Deon, is played with almost adolescent intensity by Dev Patel of Slumdog Millionaire fame. The self-named Ninja and Yolandi are members of the South African rap/rave group Die Antwoord. Both are charming in their roles as marginalized criminals, and their personal styles vividly display a retro punk aesthetic. The gang is rounded out by Jose Pablo Cantillo as Yankie. He gives a surprisingly nuanced performance as a thug who learns to care about a robot.

The big-name star power is much less effective. Hugh Jackman is underutilized and underdeveloped as Vincent, a soldier-cum-engineer who carries a gun in the office and behaves in a way that should get him walked out by security. Vincent is crudely and unbelievably religious, and pathologically invested in his own creation. He has to reject the idea of a conscious, feeling Chappie in order to adhere to his own agenda and move the plot along.

Sigourney Weaver, also playing an underdeveloped character, brings her usual cool authority to Tetravaal’s CEO Michelle Bradley. Although her early scenes show some strength, Michelle’s willingness to cave into Vincent’s intense pressure is a glaring plot device and one of the weak points in the movie.

The robot’s transition into awareness is like the taming of a wild thing. Chappie’s awakening is smoothed by Yolandi, a female gang member who dresses like an anarchic Rainbow Brite doll.  Yolandi is weirdly yet believably maternal toward Chappie, calming him, protecting him, advocating for him, tucking him in at night. The scenes between Chappie and Yolandi are full of sincerely-played, mutual trust and affection for each other.

It is a different relationship than Chappie has with his actual maker. Deon, an ambitious programmer for Tetravaal, passionately believes in Chappie’s personhood and fights for his acceptance as an individual. Yet there is still an element of paternalistic command in the way he interacts with the robot. The gang leader, Ninja, on the other hand, is slower to accept Chappie as anything more than a tool. Yet, with the prodding of Yolandi and laid-back third gang member Yankie, he eventually takes on the role of Dad for the young AI.

The creation of the family unit is extremely well done—often silly, never sappy or maudlin, and without any emotionally manipulative moments. It feels right. That quality is vital, because the believability of this affection is the basis of all that follows.

The evolution of the ties that bind happens against a background of disenfranchisement and its collision with conspicuous consumption. So much of Chappie’s environment is Johannesburg’s bleak cityscape—all empty, weedy lots, urban rubble, and tin-shack slums thrown against the contrast of sleek, disconnected corporate facilities and rich suburbs.

As part of that, Yolandi’s and Ninja’s real-life South African Zef style is on full display, underscoring the great divide between the wealthy and the marginal.  They cannibalize eighties culture—He-Man, Lisa Frank, mullets, armloads of watches, heavy gold chains—in a way that dovetails with the urbanized decay of the abandoned industrial sites, warehouses, and office cubicles that shape the story.

One haunting scene is set in an abandoned apartment tower emblazoned with a Vodacom logo, decaying and now colonized by a powerful gang. The courtyard is filled with rubble and the sky is far, far away past stories of crumbling balconies. It is reminiscent of the Forbidden Zone in Planet of the Apes, littered with the broken bits of normal life.

While visually effective, f rom a narrative standpoint, there are too many implausible actions taken. There is huge oversimplification of the childish political maneuvering within the company. And there are awkward plot twists that leave holes behind them—why would the gang let Deon come and go at will? How can Vincent use the security key in Tetravaal’s main office without anyone noticing? Why does Michelle cave without question when Vincent wants to put his robot into action?

Having said all that, I now ask you to ignore it. Questions like these may distract from the genuine emotional resonance of Chappie, but they cannot blunt it. Chappie is the real thing.

Because Chappie is a feeling being, the climactic battle between Vincent’s murderous military ‘bot and the gang that is Chappie’s family is heartbreaking. Yankie dies, Deon is gut-shot and will die soon, Ninja tries to sacrifice himself to draw the killing machine away, and Yolandi takes a fatal bullet to save Ninja. Chappie’s outrage at their deaths is wrenching, and his reaction stems from the emotional core of this story. This is his family. He loves them, and they love him. His rage is real, and viscerally honest. When he goes after Vincent his vengeance feels justified. We understand the drive to avenge such a loss. We feel it with him.

And so the true implication of Chappie’s “proper, full” AI is not that a machine is self-aware, or even self-interested. It is that a machine has learned to love another being, to risk and give and strive. For Chappie, love is the transcendence that makes a machine a person like us.

The hope I see in Chappie exists not because any of the characters will escape the fringe where they live—their saved consciousnesses housed in new, robotic bodies almost guarantee they won’t. The hope exists because they love each other. An unexpected sentiment for a genre as cool as cyberpunk—but who am I to argue with William Gibson?