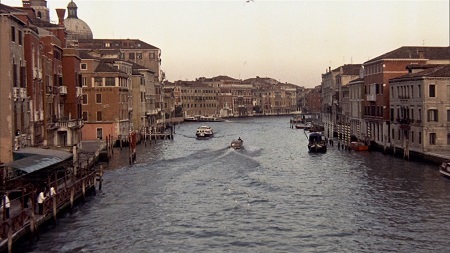 Nicholas Roeg’s 1973 film Don’t Look Now has long been considered a classic of the horror genre. But it was the director’s recent death that inspired me to finally watch it. I’m glad I did. Based on Daphne du Maurier’s chilly short story, Don’t Look Now is not just a grim, ghostly tale. In fact, the supernatural elements are background to the central agony. Don’t Look Now is a study in two people crumbling under the weight of grief, and watching their pain is disturbing in a way that monsters cannot be.

Nothing Is What It Seems

Don’t Look Now is driven by the painfully direct performances of Donald Sutherland as John Baxter, and Julie Christie as Laura Baxter. Hilary Mason and Clelia Matania are more collected as the sisters Heather and Wendy. The rest of the cast manages a consistent, cool disconnectedness from the Baxters’ pain. 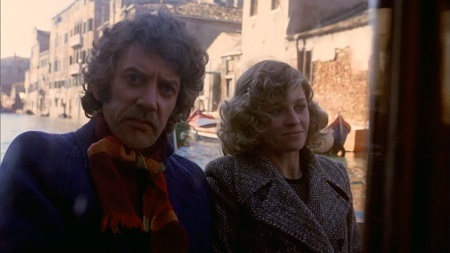 The story begins with a tragedy. John and Laura Baxter have moved to Venice temporarily, following the accidental drowning of their daughter, Christine. John is preoccupied with his work restoring an ancient church, while Laura is left at loose ends.

Laura is on the verge of a breakdown. John is distant. Their marriage is fraying.

When they meet a pair of sisters, one of whom claims to be clairvoyant, Laura attaches herself to them. They tell Laura that her daughter is there, with her parents, and happy. They also warn her that John is in danger, and needs to leave Venice.

Laura is thrilled to know her daughter is happy, and actively chooses the comforting fantasy while still urging her husband to go home until the threat is past. John believes the sisters are running a scam of some sort, yet he begins to notice a small, cloaked figure that he conflates with his daughter. As the film progresses, John’s and Laura’s beliefs see-saw between what is true, what is imagined, and what they want to be real. 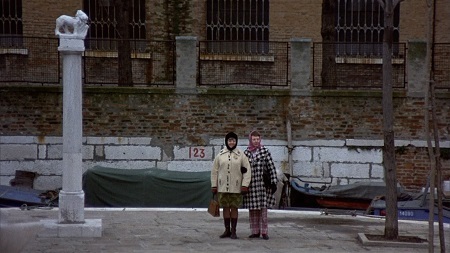 The sense of dread in Don’t Look Now comes from the reactions John and Laura have to their daughter’s death. While Laura is heartbreakingly fragile, John too is coming apart at the seams. He tries to appease his wife, indulging her growing friendship with the sisters. But when he snaps at her that their daughter is “dead, dead, dead” she places the blame on him so blithely, so matter-of-factly, that its impact is stunning.

A Study in Scarlet

Don’t Look Now has few secrets after forty five years, but its impact is still profound. Stylized and portentous, the story is doled out in intercut scenes and flashes of memory. Roeg’s technique keeps the viewer off-balance without confusing the narrative. The once-shocking sex scene has become tame over the years, but the graphic pain of Christine drowning will never dim. 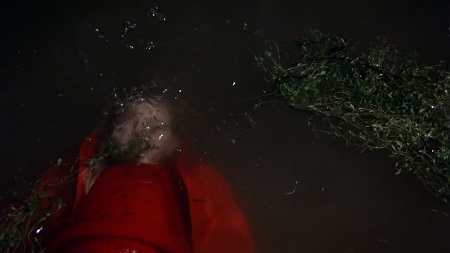 The use of the colour red throughout is already well-known, as is the recurring motif of water–flowing, spilling, dripping. Onscreen the juxtaposition of colour and texture is absorbing, pulling the viewer into the subtly threatening world of the film. Close-ups of the actors create an uncomfortable effect. Rather than inspiring intimacy, they become alienating. We are shown things that may or may not exist outside the characters’ imaginations. We are left as lost as they are.

The muddy ugliness of the child’s death is echoed by the dank loneliness of Venice. The city is filmed as dim and full of echoes, with too many dark, empty alleys to get lost in. And although Laura and John are familiar with Venice and its old ways, they remain outsiders. There is a distance between the English visitors and the native city dwellers expressed through unreadable expressions and dismissive questions, and attitudes that treat the Baxters as difficult and troublesome.

Roeg’s film is a classic for a reason, and I recommend it for what it reveals. The horror infecting Don’t Look Now is not the supernatural. It is the inescapable pain of loss. Loss drives the characters to believe in the impossible, to follow leads they know are lies, to pretend everything is finally all right. None of it works. The only escape is, at last, to break with the real world and accept the ghosts.