We are now three episodes into Ash vs. Evil Dead, and I think it’s time to review where it’s been and see where it might be heading—because once is chance, twice coincidence, and three times is a pattern.

And Ash vs. Evil Dead’s pattern is emerging. Even if you haven’t seen it yet, I’m sure you’ve heard about it. Good things. Very good things. And they are all true. 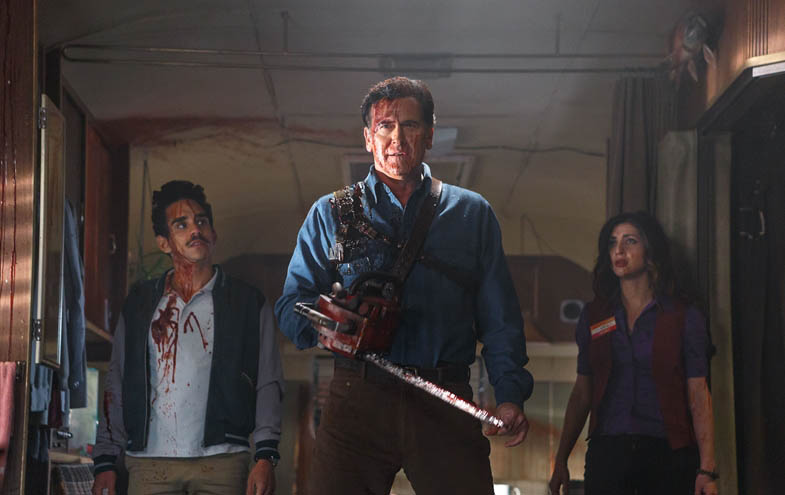 Our heroes in Ash vs. Evil Dead

In a magnificent display of misguided machismo, Bruce Campbell chews all the scenery as our hero, Ash. His young, unevenly committed sidekicks are Ash’s coworkers. Pablo (Ray Santiago) and Kelly (Dana DeLorenzo), are much lower key but very funny. Their comic timing and delivery is spot-on.

The straight-man balancing all the comedy is Special Agent Amanda Fisher, played by Jill Marie Jones. She lost her partner to a deadite, and needs to figure out what happened. Rounding out the main cast is Lucy Lawless. As Ruby Knowby, she brings the mystery—who is she, and what does she know about the strange happenings?

Ash vs. Evil Dead is full of familiar camera tricks lifted from the movies, a fondness for antlers in set decoration, the maniacal giggle of the possessed doll that sounds like Ash’s long-dead girlfriend, and of course, Ash’s car.

The cheerfully awful CGI is a nod to the truly cheesy effects from the first movie. There are ridiculous amounts of gore and vats of blood splashed everywhere, and the one-liners are splattered as generously as the fake blood. There’s also classic Deep Purple on the soundtrack and three decapitations in the first twenty minutes of the premiere episode.

Episode 1 reintroduces Ash in all his glory, and establishes him as an unrepentant, ignorant, arrogant pig—because if he isn’t he can’t develop as a character and the show will quickly sputter out. He’s still a stockboy, he still parties too hard, and he’s still quite the pick-up artist. While trying to get lucky while stoned out of his gourd, he and his date read from the Necronomicon and set everything in motion. The epic battle in Ash’s trailer brings back the chainsaw and the boomstick and allows for buckets of blood to be splashed over everyone with much gusto.

A serious note is inserted into Ash vs. Evil Dead through Special Agent Amanda Fisher, who gets sucked into the mess Ash has made. Hints of her importance are dropped, with a deadite telling her “We know who you are”.

Episode 2 gets Ash, Pablo, and Kelly up and moving on the quest to get the Necronomicon translated in order to send the evil back to where it came from. This involves killing off their former boss, a side trip to kill Kelly’s deadite parents, and a decision to work as a trio.

Special Agent Fisher is still on Ash’s trail, now with a police sketch and a possible destination to help her.

In Episode 3, things are settling into the groove required for series television. Ash raises a demon, leaves chaos in his wake, learns to accept the help of Pablo and Kelly and embraces the idea of teamwork as “The Ghostbeaters” instead of being the “alone wolf.” In addition to the ongoing threat from the Necronomicon and the deadites, there is the mysterious pursuit by Lucy Lawless’s still-unidentified and convincingly bad-ass character, and the interference by Special Agent Fisher.

Starz played the original Evil Dead before launching Episode 3. It was refreshing to see Ash’s character as a noob, and a reminder that he’s changed just a little since then.

The only thing I was leery of in the first episode was the show’s ability to balance the silly with the scary. But the serious tone of Fisher’s story line actually, so far, works out well. It is being integrated in a way that makes the comedic characters more human and will give the grim Officer Fisher a chance to have a sense of humor. That will give the premise some fresh meat to chew on and keep Ash vs. Evil Dead from being entirely cartoonish. And I have the feeling Ruby will turn out to be Ash’s worst nightmare, either as another force of evil or the most righteous avenger he’s ever seen.