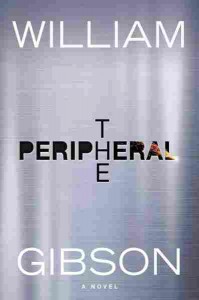 Any review of The Peripheral, William Gibson’s most recent novel, has to look at multiple scenarios. The story straddles a too-familiar near-future and a second future that dwells on its many possible pasts. It is plot driven, uneven, and socially observant, quirky and gritty and irreverent and grim. It is a tangle whose devices are explained repeatedly, in nuanced fragments, at regular intervals. The future Gibson posits is pretty dark. It’s also pretty hopeful. It all depends on the elaborate intersection of multiple pasts with their potential presents, and the histories that will come of them. It is a novel I will read again.

The Peripheral happens in two futures—the first a resource-depleted one not far from our present, and the second a depopulated but vastly rich time about seventy years further on. Certain wealthy, second-future “continua enthusiasts” utilize secret Chinese servers through which they can contact and manipulate the past for their own gain.

The two time streams are separated by a drawn out cataclysm called simply “the jackpot:” “It was no one thing… it was multicausal, with no particular beginning an no end. More a climate than an event, so not the way apocalypse stories liked to have a big event” (319). A slow motion apocalypse, “…it killed 80 percent of every last person alive, over about forty years” (320). This great dying-off allowed for well-positioned survivors to benefit from the new surplus of resources and the snowballing advances in technology: “The richest had gotten richer, there being fewer to own whatever there was” (322). They had, for all purposes, indeed hit the jackpot.

On the near side of the jackpot we have Gibson’s first POV character, Flynne, her family, and her associates. They live in tech-driven poverty in an undefined rural American county, where the primary economic opportunities are in illegal drug manufacture, grey market product fabrication, online gaming for hire, and government disability. Each day is its own struggle, and there is little hope of anything better.

On the far side, though, we have a world rebuilt for the lucky few who survived, in an environment restored through a combination of extensive nanotechnology and less population pressure. The remaining centers of power are London and vague China, and the survivors fill their emptied cities with androids for company. They also use these androids as “peripherals,” short-term containers for transferred consciousness that allow the users to meet each other without the bother of travel. Gibson explains much of this for us through Netherton, Flynne’s contact and this timeline’s POV character.

The plot of The Peripheral is set in motion when Flynne, taking a shift in what she believes is some virtual reality, witnesses a woman’s murder: “The woman never moved, as something tiny punched out through her cheek, leaving a bead of blood, her mouth still open, more of them darting in…Her forehead caved in…the woman toppled backward, limbs at angles that made no sense…less a body every inch it fell” (56). In the future where the killing occurred Netherton is assigned to Flynne as a handler of sorts, when she is present in a peripheral body. The hope is that she will be able to identify the murderer.

But first, she has to understand some of what drives the future: “You can’t get there. Nobody can. But information can be exchanged, so money can be made there” (38).

And the money is the crux of it. The continua enthusiasts do not reach back out of curiosity or a sense of responsibility. Most of them don’t concern themselves with the repercussions of their interference because it is an amusement, transactional, and to their benefit—and their manipulations in the past do not affect their present. Each time the future initiates contact with the past it generates what those involved call a “stub,” an alternate timeline that is no longer part of the future’s past. “In each instance in which we interact with the stub…we ultimately change all of it, the long outcomes” (70). From a seventy year remove, it is expected that those making contact will not care very deeply about the effects: “Imperialism…We’re third-worlding alternate continua. Calling them stubs makes it a bit easier” (103). In the grand tradition of exploitation, dehumanizing the exploited is a requirement. Interacting only through phones and peripherals maintains that distance.

“Peripheral” in The Peripheral refers to more than just the android bodies the characters use to travel and interact across time. It also describes Flynne, and Netherton, and most of the characters Gibson names on both sides of the jackpot. They are all peripheral to the real powers in their worlds, and are used by the prime movers to achieve ends they cannot even envision. Even the very wealthy, while free to manipulate time, are not as powerful as they would like to believe. In The Peripheral, the prime movers exist only in the background. Their plots and motivations are like the great beasts of the deep, shadowy and indistinct, but powerful enough that the wake of their passing moves all the smaller creatures.

Although Gibson glosses over the scope of her authority until near the novel’s end, the character of Lowbeer proves to be The Peripheral’s most powerful player. As a government operative with vast resources and overarching objectives. “Lowbeer knows the history of her world, and the secret history of ours. The history that produced Lowbeer’s world includes the assassination of the president” (378). Lowbeer is in the rare position of having lived through the jackpot. She has existed for a century. She has real power, and has had it for many years.

Lowbeer links Flynne’s time to Netherton’s in a way the peripherals and the servers can’t. Her influence spans all of it: “Civilization was dying, of its own discontents. We live today as a result of what I and so many others did to prevent that. You yourself have known nothing else” (384). She is a prime mover, present in multiple time streams, yet she is presented in the novel as a peripheral character in a way that keeps her both of and outside of time. She is the memory of the novel, the character who can understand the entire game, its players, instruments, and repercussions. And now she is working to change one of her own pasts:

“Coldiron and Matryoshka, as your people are calling it, are racing for ownership of your world… Matryochka, which exists in order to kill you, and for no other reason, appears to be employing some more powerful state financial apparatus, here. I need to stop that, in order to enable Coldiron’s dominance, which may enable the prevention of Gonzalez’s assassination. But the politics here are such that I’m unable to do that without first having  proof, or some reasonable facsimile thereof, of who murdered Aelita. I can’t begin to explain how power works, here…” (430).

Wrapped up in the convoluted politics and power plays of the immediate situation, Lowbeer is working towards a moral outcome–to influence whether or not the jackpot ever happens. Her own present is secure, but it is still possible to spare the past. 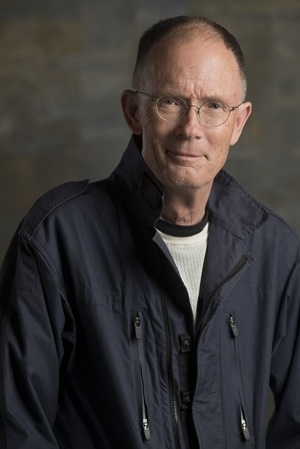 It was good to be reading Gibson again. His prose is clean and vibrant. His ideas are complex. He demands that his readers think. At times it seemed he was repeating himself by explaining and re-explaining the limits of time travel across the continua. And I can’t quite decide how I feel about the pacing. The Peripheral happens over the course of a week—but that week happens over the course of almost a century. It’s a lot to process—and it’s well worth it.

One thought that stays with me long after The Peripheral is done is how alarmingly prescient it feels. Flynne’s time is only about thirty years from now. The tech is recognizable. The corporate dominance is recognizable. The under-serving of veterans is recognizable. Half-hearted stabs at conservation, economic decline, the drug trade pushing in where hope has faded—none of this is much of a stretch. And the conclusion drawn from those circumstances, that the already wealthy will survive and profit as the poor suffer the brunt of depleted resources—that’s not a stretch at all. We’ve seen it before when nations built their empires.

Another is that while The Peripheral is a mélange of murder mystery, social commentary, and cautionary tale, to me it seems that Gibson uses the relevance of history to underscore the responsibility that comes with power. Power is only superficially about manipulating markets for financial gain. Real power in The Peripheral comes from understanding the implications of history as it is lived, and preventing suffering where it is possible. Just because the jackpot happened doesn’t mean it has to happen.