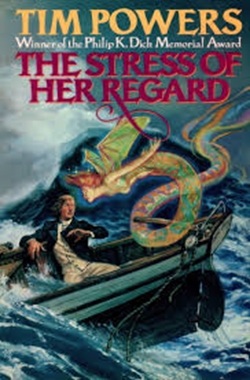 The Stress of Her Regard

Before I can attempt a review Tim Power’s award-winning novel The Stress of Her Regard, I have a confession to make. I have read this book at least fifteen times. Quite possibly more. Some books are like that, with that kind of pull. I never read another book by Powers, though—I owned a few over the years but never cracked them. Didn’t feel the need to. I had so much fun with this one, why would I risk reading something less wonderful?

Don’t get me wrong, though—this is not a deep philosophical work like some others I have reviewed. Even though The Stress of Her Regard won the 1990 Mythopoeic Fantasy Award for its rich use of mythology and literary studies, it is a cheerfully well-written, rollicking, swashbuckling, action-and-garlic packed adventure that swoops from England and Scotland to the Swiss Alps and on to Rome and Pisa and Venice, before it lays its rather amorphous monsters to rest. The Stress of Her Regard is a sometimes-loopy page turner, and a very different view of vampires than is today’s standard.

“…he managed to awaken the mountains enough to talk to them, and he learned about their people, the nephelim,the pre-Adamite vampires, whose petrified bodies could still be found here and there, dormant like seeds in the desert waiting for the right kind of rain” (255)

Our story begins properly in rural England in 1816, with a very drunk Dr. Michael Crawford accidently marrying a statue–a statue that happens to be one of the nephelim. And the nephelim are all vampires. Oops. This action proves to be a major impediment to him marrying his human fiancée—especially when the jealous vampire lover kills her human rival on their wedding night. But this is par for the course with these creatures. The vampires want what they want, and will kill anyone who might distract or interfere with the object of their desire. Spouses, siblings, and progeny all become collateral damage. “Once they’ve focused on anyone, they seem to keep track of him throughout his life. And keep track, keep disastrous track, of his family, too” (53).

Dr. Crawford’s particular creature also happens to be the unnatural twin sister of Percy Shelly, making Crawford his brother-in-law and a well-loved member of the monstrous family. And while the circumstances of Shelly’s and his sister’s birth are rare, the carnal relationship the vampire has with Crawford is not: “The problem is that there aren’t any pure-bred lamiae, pure-bred vampires, anymore” (50). They may be elemental and practically immortal, but they still have to reproduce, somehow—and humans will do just fine for that. 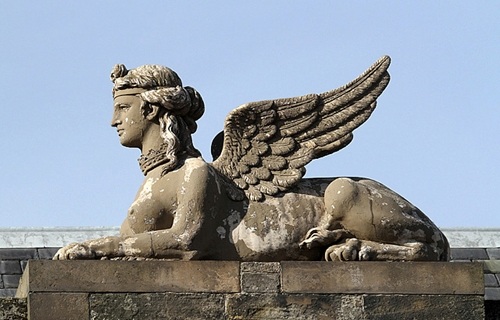 A sphinx, one of The Stress of Her Regard’s vampires

Powers manages to incorporate whatever folklore he can lay his hands on into one culture-blind, all-encompassing mythology of vampirism—according to Powers, these creatures predate human culture, and are the source of the legends about the nephelim and lamiae, the Muses, the Fates, the Sphinx, poets and doppelgangers, trolls and Balder, the Graiae and the Gorgons. Lot’s wife is pulled into the mix as a Biblical vampire, since “the nephelim were the ‘giants in the earth’ they had in those days, the descendants of Lilith, who sometimes laid with the sons and daughters of men” (95). Even caesarian sections and kidney-stones are somehow connected to them.

These vampire-serpent-nephelim are the other sentient race on Earth, and are under various circumstances combinations of stone, reptile, humanoid, and phantom. They can marry a human and give him the near-immortality of a grossly extended lifespan, or they can consume a human by drinking his blood and give him the parasitic immortality of a vampire’s host.

A strange and anachronistic connection is drawn between the Sphinx’s riddle and the atomic structure of carbon, silicon, aluminum, and iron to explain the myth’s origins and the vampires’ evolution:

“Each of these spheres is ‘many thousand spheres’…and it’s the number of these pieces of electricity in the atom’s outermost sphere that defines which other atoms the atoms can combine with. The pieces of electricity are the limbs by which the atom can seize other atoms, and three kinds of atoms are the bases for the three kinds of skeletons. Even the surviving legends of Oedipus describe the four-and-two-and-three as means of support” (257).

It is a stretch, but it fits among the scattershot multitude of lore fragments that Powers uses in his vampire mosaic. Many of the associations are so random as to make little or no sense, yet the inherent confusion and ignorance of the main characters lets Powers glide easily over any tenuous connections or inconsistencies and make them functional parts of the narrative. Crawford and Josephine don’t really get the big picture, Byron and Shelly don’t explain it in any great depth, and most other characters assume that everyone already knows all the finer details of the human-nephelim connection.

I know my summary of The Stress of Her Regard sounds quite messy, but Powers is a master at his craft. His pacing is surefooted and intense—constant forward motion is delivered whip-crack fast. He handles his creation with great assurance, although characterization occasionally falls by the wayside. In addition to Powers’s own main protagonists, Dr. Crawford and Josephine, the historical poets François Villon, John Keats, Lord Byron, and Percy and Mary Shelly are all major players in the complicated game. All of them have been marked by the nephelim as sibling, spouse, or prey, and all of them are fighting to break free of the dangerous attention. We can get a feeling for the characters, enough to differentiate them, but too much is going on to feel too deeply for any of them. But that’s okay. There’s no need to cry over characters protected by the very monsters they are fighting. 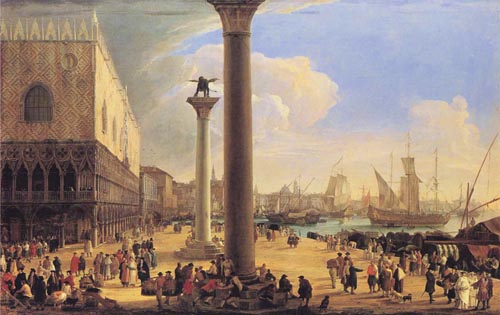 Venice, where The Stress of Her Regard hides the Graiae

I did find that I disliked the main character, Crawford, simply because of the voice Powers used for him. The good doctor is invariably portrayed, both in description and in internal monologue, as a rather awkward and sort of selfish, judgmental, and whiny individual: “He toppled forward into his plodding, splashing run again, resolutely not letting himself think about how cold and wet he was, nor about how cold and wet he was likely to be in the future, now that he would have to give up his employment and return to the life of a penniless fugitive…” (182).

Fortunately, Crawford’s personal qualities are not critical to the energy or execution of the plot. In The Stress of Her Regard, Powers pulls together an amazing narrative from an unexpected range of sources in a way that will make you look at familiar tropes and fairy tales and say “I wonder if that fits…”. Enough of the sparkly vampires, the sexy vampires, the too-cool ones that pretend to be human. These are the vampires you want to read about. More than once.

Tags: Stress of Her Regard, Tim Powers, vampires

2 thoughts on “Read This: The Stress of Her Regard”