The Man in the High Castle, Amazon’s adaptation of Philip K. Dick’s 1962 novel, is an intriguing, well-plotted spy drama set in an incompletely subjugated America after the Axis victory in World War II. Germany and Japan share control of the continent, with continued mutual mistrust. A resistance exists under each government’s rule, one that hinges on the transportation of secret films that fuel the rebellion.

Between the Reich’s holdings on the East Coast and the Japanese Empire’s on the West is the Neutral Zone. It is effectively a no-man’s land that provides some safety for Blacks, homosexuals, and other social outcasts. Despite the pressure of the Reich and the Empire, it is apparently quite easy to travel to the neutral zone and back by a regular bus route. 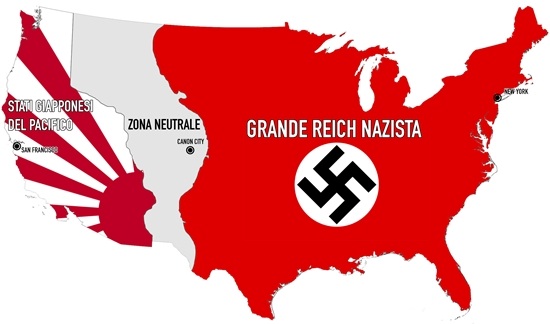 America in The Man in the High Castle

There are a few spoilers ahead.

The Man in the High Castle’s cinematography is quite beautiful, with a muted palate like a faded old film print. The red of the Nazi flags is the brighter for it. There are some strikingly emotional moments, such as the ash falling like snow from the hospital that is burning “cripples, you know, a drag on the state” in episode 1, and the boom shot of mass graves in episode 7. One character leaves origami birds behind him, in a nod to producer Ridley Scott’s Blade Runner.

The plotting is tight, with nothing wasted even when the story takes its time unfolding. It is intrigue upon intrigue, delicate, building on the increasing tension between the Japanese and the Nazis. Like ripples expanding in a pool, the number of characters grows and the conspiracy expands. By episode 4, though, a main driver of the plot becomes Juliana’s search for answers to her sister’s death rather than the resistance itself.

The acting is as impeccable as the writing allows. The Man in the High Castle suffers at times from the rushed characterization of series television. Characters leap into rebellion or radicalism with little prelude to their sudden embrace of the cause. The exposition is occasionally clunky, as characters ask obvious questions and translate what they just said, effectively repeating themselves.

Secondary characters become more developed as the series goes on, while the primary characters actually become soapier. Juliana (Alexa Davalos) and Joe (Luke Kleintank), the young leads, are unfortunately underdeveloped as they are written. As a possibly wavering double agent, Joe’s moral ambivalence too often comes across as indecision.  And Juliana strikes me as too vacillating and selfish to be a hero. Her determination comes off as a sort of Nancy Drew pig-headedness. I’m surprised the resistance didn’t kill her for a loose cannon when she told them she will not sacrifice for the cause.

But there are a number of very strong scenes in the second half of the series that help add depth to what has gone before. One of the best is between an unctuous antiques dealer and a wealthy Japanese couple. The Japanese are attempting to embrace all aspects of American culture while the dealer rejects out of hand any Black and Jewish cultural contributions. Cultural appropriation is rampant on both sides. The awkwardness feels real.

By the last episode, both the Japanese and the Nazi players are more interesting and more important than the resistance characters. Again, much of it falls back on the script. The bad guys are allowed to display deeply moral decision-making processes and a willingness to shoulder their responsibilities in a way that is missing from the resistance characters. As Obergruppenführer John Smith, Rufus Sewell is a nuanced Nazi, believable as a father wrestling with the state-required death of his genetically diseased son and also as a military man who suspects he is being set up. And in particular, Trade Minister Tagomi (Cary-Hiroyuki Tagawa), Inspector Kido (Joel de la Fuente), and Officer Wegener (Carsten Norgaard) all display a sense of larger purpose, willing to sacrifice their honors and their lives for the sake of averting further war.

In my opinion, The Man in the High Castle is a flawed yet satisfying show. The cast and production are outstanding. There are many philosophical points to ponder among the plot twists, awkward romances, and action. The final scene left us hanging. This is well worth ten hours of your time, either in a binge or more moderately paced. Since I binged, I will have to read the source novel while waiting for season two. I’ll let you know how that goes.