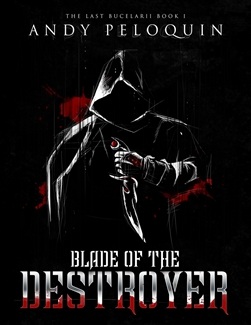 Blade of the Destroyer

Today, I’d like to review a work by a new author. The Last Bucelarii (Book 1): Blade of the Destroyer is Andy Peloquin’s second book (his first is available on his website), and it is a sturdy, serviceable fantasy adventure. Blade of the Destroyer has a solid plot, fast pacing, and lots of action. The story is energetic, with vivid fight scenes and a promising set of characters. As the first book in a planned trilogy, they will have room to grow.

Blade of the Destroyer’s anti-hero protagonist, the Hunter, is a legendary assassin in the port city of Voramis. He wields a dangerous, sentient dagger named Soulhunger, that costs him for its services: “One scar for every life Soulhunger takes. How many are there now?” (Kindle Locations 342-343). Drawn into a cosmic struggle between the forces of good and evil, the Hunter is forced to confront his own role in it.

The cast of characters and the forces at work in the plot are all named to intimidate: the Hunter, Soulhunger, the Dark Heresy, the Bloody Hand. And of course, there is also a secret priesthood: “We are the last line of defense against the darkness. We are the ones who forever watch, to prevent the return of demons to this world…We are the Cambionari.” (Kindle Location 3030-3032).

Most aspects of the story are larger than life. Blade of the Destroyer touches on many of the major tropes of traditional Dungeons and Dragons style fantasy fiction—mysterious heroes, voluptuous wenches, pompous lords and ladies, thieves and strongmen, taverns and palaces and secret cults, half-bloods and demons and gods and sorcery. There are lots of burly warriors, lots of beautiful and treacherous noblewomen, lots of sweet innocent children in need of protection. Much familiar ground is covered.

Adding to the familiarity is that many of Peloquin’s inspirations are right on the surface. The most obvious is his homage to Michael Moorcock’s Elric Saga and the soul-stealing sword Stormbringer. Biblical references also play a large role (especially toward the end of the book), from the Apostles: “There are twelve of us here, and, with the Hunter, we are thirteen. The number of the gods themselves” (Kindle Locations 3350-3355), to Satan: “Shem-zith-el, mighty warrior of the Fallen Host!” (Kindle Location 4740), to Hell itself: “We are Legion” (Kindle Location 4925). I also detected a touch of Tim Powers’s Stress of Her Regard, with the Cambionari and their iron weapons that turn demons to stone closely following Powers’s Carbonari and his stony vampires. There is even a throwaway reference to Batman: “I can see it now: the Hunter, the hero Voramis deserves.” (Kindle Locations 4399-4401).

I found repetitive descriptions and inconsistent dialogue to be the main flaws of the novel. Certain adjectives were overused, lessening their impact. And character conversations occasionally came across as clunky and overdone, with speech styles shifting between pseudo-medieval and modern, and some passages falling into the bad-guy-explains-everything-to-the-captive-hero category.

As a result of those two issues, I felt the characters were somewhat flat—vigorous action took precedence over depth of development. But there are other books coming that will give Peloquin a chance to flesh them out.

With Blade of the Destroyer, it strikes me that Peloquin hasn’t yet fully settled in to his own voice but that he has great potential. Among the familiar trappings of main-stream heroic fantasy, there are flashes of a very sharp wit and a snarky sense of humor that balances the bloodshed and grim doings. Some of my favorites are:

“Unwary visitors to the district often woke up with an aching head and an empty purse, not to mention a host of persistent diseases on body parts better kept free of infection” (Kindle Locations 96-98).

Peloquin also included an exchange between two minor characters that reminded me in its playfulness of something out of Shakespeare:

“Well,” began Sor, “I knew I had a—” His words were cut off as his friend smacked him on the back of his head. “Ow! What in the flooded hell was that for, Yim?” “That’s for wagerin’ our duties on a pair of rods, and forgettin’ Harkin had been sittin’ on triple spires all night long,” Yim muttered (Kindle Locations 599-611).

These quips and odd bits were unexpected, funny, and very engaging. They were the pieces that I think showed Peloquin’s skills to their best advantage and leavened the seriousness of the story.

My takeaway is that Blade of the Destroyer is a generally solid sophomore effort whose strengths lie more in its plot structure and pacing than in its characters’ depths. Entertaining and unsurprising, Blade of the Destroyer is still an enjoyable run through of the main tropes of heroic fantasy fiction. And in the Hunter, Andy Peloquin has created a character that, with some polish and additional, personalized nuance, will certainly be able to stand his ground for the rest of the series.

A little bit about Andy Peloquin: 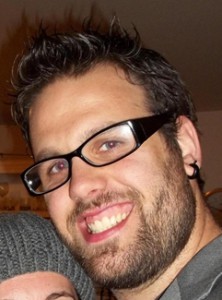 Andy Peloquin, author of Blade of the Destroyer

Andy Peloquin–a third culture kid to the core–has loved to read since before he could remember. Sherlock Holmes, the Phantom of the Opera, and Father Brown are just a few of the books that ensnared his imagination as a child.

When he discovered science fiction and fantasy through the pages of writers like Edgar Rice Burroughs, J.R.R Tolkien, and Orson Scott Card, he was immediately hooked and hasn’t looked back since.

Reading—and now writing—is his favorite escape, and it provides him an outlet for his innate creativity. He is an artist; words are his palette.

His website (http://www.andypeloquin.com) is a second home for him, a place where he can post his thoughts and feelings–along with reviews of books he finds laying around the internet.

He can also be found on his social media pages, such as: