Castle Rock is Hulu’s finely-crafted ode to Stephen King’s intricate world-building. The series is faithful to the author’s voice and deep sense of nostalgia, and brimming over with familiar names and references. Originally released on July 25 and with the first season still unfolding, it has already been renewed for a second season. If it can grow past the limits of the familiar and the nostalgic, I am heartily behind it.

So many threads from King’s mythos are knit together here that anyone familiar with his work will have no problem finding their bearings. The show is built layer upon layer, with a deeply felt sense of the community and its people. It highlights the skill King has always had of making his world big enough for his characters to have lives outside the confines of any particular story. 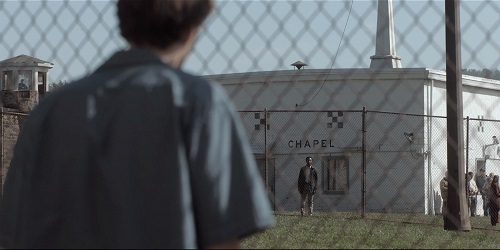 Castle Rock also evokes all the familiar themes of King’s work. It features good, decent, damaged people fighting their dark sides and often failing. There are the expected flashbacks to twelve-year-olds facing the origins of coming horror, godly true believers and evil incarnate, pedophiles, and magical African-Americans. And, of course, there is well-placed classic rock and blues.

“Nothing stays dead in this town.”

The cast is outstanding. André Holland plays Henry Matthew Deaver, death-row attorney and prodigal son at the heart of the unfolding mystery. Bill Skarsgård is…unnatural…as The Kid, a nameless prisoner discovered in a pit at Shawshank State Penitentiary. Scott Glenn gives retired sheriff Alan Pangborn a determined vitality, while Melanie Lynskey’s Molly Strand shows a quiet desperation beneath her ambition. Rounding out the main cast are Jane Levy as Jackie Torrance, writer and font of local knowledge, and Noel Fisher as Dennis Zalewski, a Shawshank prison guard who sets the story in motion while trying to do the right thing.

Assorted minor characters are well represented by the talented likes of Ann Cusack, Terry O’Quinn, Frances Conroy, and Rory Culkin, among many other. 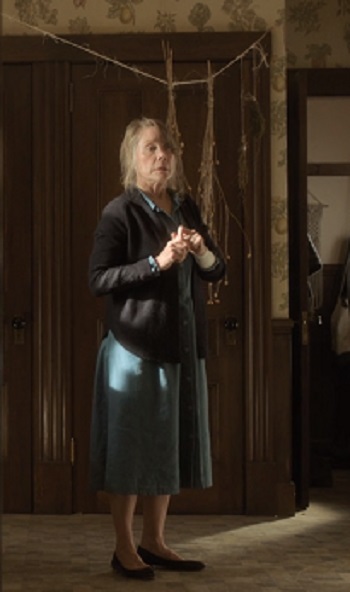 Sissy Spacek, the Once and Future Queen

But the absolute standout is Sissy Spacek. She brings the same convincing blend of fragility and strength to Ruth, Henry’s fierce and failing mother, as she did to her portrayal of Carrie in 1976. Episode 7, “The Queen”, is a star-turn.

As good as Castle Rock is, it isn’t perfect. It takes itself very seriously, and the portentousness does wear after a while. At times the plot twists broadcast themselves, as when Alan teaches Ruth how to do sleight-of-hand. And a few characters have (so-far) opaque or non-existent motivations. This ends up creating inconsistencies in otherwise beautifully drawn characters. One false note is Jackie Torrance’s actions upon meeting the Kid. Another is Alan Pangborn’s wild goose chase. Both are clearly the needs of the plot, and not natural reactions from the characters. The sudden addition of Henry’s son to the goings on also feels like a set-up rather than a character-driven decision.

And just and aside:  While this is definitely a show for adult audiences, the graphic depiction of animal deaths surprised me. Human carnage? Not a problem. But I didn’t expect the Mr. Jingles stand-in to meet that particular fate on-screen.

The emerging evil in Castle Rock is signaled by wildfires, mass shootings, suicides, and ugly family conflicts. But while all the trappings and affected characters are comfortably familiar, the show has not so far taken that familiarity in a new or challenging direction. Castle Rock is a wonderfully done pastiche of all things King, but I am interested in seeing it grow beyond that. There are still three more episodes for Season One.

I guess we’ll just have to stay tuned.