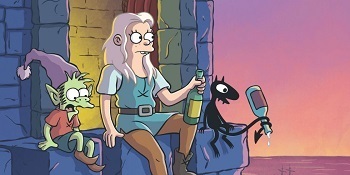 Disenchantment, Matt Groening’s new series for Netflix, certainly has its own unique charms. It is no Futurama. It is certainly not The Simpsons. While there are, of course, similarities to Groening’s earlier work, this new show is something that aspires to be a heartfelt, ongoing saga while still capturing the goofy spirit of the other series.

So far, Disenchantment has had some difficulty in finding its direction. The first season is a rather uneven journey, but it’s definitely on the right track.

The series follows the adventures of Princess Tiabeanie Mariabeanie De La Rochambeaux Drunkowitz of Dreamland, known more economically as Bean. She is a boozy, rebellious teenager who is constantly at odds with her father, King Zøg, her stepmother, Queen Oona, and her half-brother, Prince Derek. Bean’s only friends are her nursemaid, Bunty, Elfo the renegade elf, and Luci, Bean’s very own personal demon. She is also dealing with the loss of her mother, Queen Dagmar, who died when Bean was just a baby. 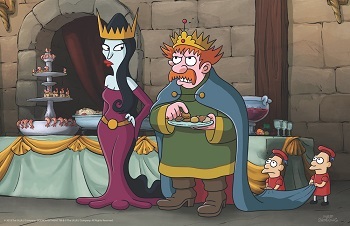 Zog and Oona, Rulers of Dreamland

I think Bean’s relationship with her father is well-done. King Zøg has what may be a good heart inside his crusty royal shell. And for all her push-back, Bean loves her dad. I also find Queen Oona refreshing as the not-actually-mean stepmother, who manages to be both bizarre and boring in her stepdaughter’s eyes.

Unfortunately, the main characters’ personality traits are also somewhat random from one episode to the next, which makes it harder to become fully invested in them. Bean’s scattershot behavior is at least excusable for a confused teenager, but the writers don’t seem to have a good handle on Elfo and Luci. Both of these characters are frequently out of character, with Elfo in particular swinging wildly from innocent to cynical and a number of points in between.

On the other hand, the minor and incidental characters are wonderful, my favorites being the King’s two pages (who I suspect are Akbar and Jeff) and a knight’s overprotective mother.

Disenchantment is not quite a sitcom like Groening’s other shows. It is a sharp comedy with a lot more going on inside the jokes. It mocks the conventions of the whole fantasy adventure genre while embracing the threats and dangers inherent in it. Disenchantment is frequently laugh-out-loud funny, and other times quite sentimental. The show has already taken a few serious turns. There have been several on-screen character deaths (some more permanent than others), played for comedy and for genuine tragedy.

The initial impression I get of the series was that it is still feeling its way. The thread connecting all the scattered plot points was too obvious to ignore, but still hard to follow. Then the final few episodes managed to not only tie most of the story together, but to take it into unexpected and promising territory. That sudden turn is one of the strongest reasons I can give to watch.

With all its inconsistencies and slightly blurred focus, I like Disenchantment. A lot. There is an unexpected and welcome warmth to it, and what I hope is the promise of something more substantial to come.