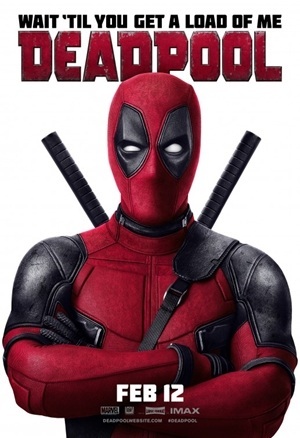 Short version: Deadpool was &$#!!@ amazing. From the initial strains of “Angel of the Morning” by Juice Newton to the final notes of “Careless Whispers” by Wham!, Deadpool met, exceeded, and blew away any expectations I had. Hyperbole, perhaps, but when the opening credits list a Douchebag, a Hot Chick, a British bad-guy, and a CGI Character as producer and various cast, you know you are going somewhere where you had better hold on.

In brief, this is the story of how dishonorably-discharged Special Forces operative and sleazy mercenary Wade Wilson accidently becomes the super-powered, super-healing Deadpool because of an ill-advised and illicit attempt to cure his cancer. He comes out with his sense of humor not only intact, but turbocharged. It pairs nicely with his desire for vengeance on the man who messed him up. Hilarity and mad action ensue.

Decapitations, slow motion chaos, exploding heads, car crashes, collapsing dry docked battleships, Hello Kitty and ill-used unicorns abound. There is no down time. I will need to see Deadpool at least twice more to fully absorb the overwhelming tide of snarky references and asides splashed around with depraved indifference for any softer sensibilities. The fourth-wall wasn’t just broken. It was functionally removed, since Deadpool narrated his story directly to the audience. That conceit, beautifully written, provided an immediate connection to the character that the vast majority of comic book movies lack.

Colossus and Negasonic Teenage Warhead represent the X-Men connection (because, as was often mentioned, budget constraints prevented anyone else from being there) and do their level best to talk Deadpool into becoming a hero. As X-Men related spin-offs go, Deadpool is a remarkably unlikely candidate. He is profane and irreverent in a way the X-Men (and superheroes in general) have never been. It’s almost like they are worried about not being noble and impressive enough, or something. But our Deadpool gives no f’s. He is mayhem in red spandex, to hide the bloodstains. Fortunately for everyone, he’s also willing to consider the hero thing.

The cast was, of course, perfect. Ryan Reynolds was a comedic whirlwind as Deadpool. Morena Baccarin matched him as his girlfriend, Vanessa. Ed Skrein was suitably wicked as Deadpool’s nemesis Francis, with Gina Carano as his sidekick Angel. Rounding out the main cast were Brianna Hildebrand as Negasonic Teenage Warhead, Stefan Kapičić as Colossus, Leslie Uggams as Blind Al (Deadpool’s formerly-coke-headed roommate), and Karan Soni as Dopinder, the easily-influenced cabbie. And of course Stan Lee had his cameo. It wouldn’t be a Marvel movie without him.

It was incredibly refreshing to have a bad-ass character be so funny. Against the looming background of the Marvel Universe and the upcoming Captain America: Civil War, it’s good to laugh. Even in those films that display a good sense of humor, like Iron Man and The Avengers, there is an almost insufferable seriousness and self-importance. These are comic book super hero movies. They aren’t supposed to be important; they’re supposed to be fun.

And Deadpool is incredibly fun. It is shockingly inappropriate and relentlessly, effortlessly funny. There were plenty of scenes that made me laugh so hard I snorted. There were some so stunningly rude that I laughed too hard to breathe. Trimming this back to a PG-13 would have been a bad, bad mistake.

To sum it up: going in, I had very high hopes for Deadpool after an inescapable and happily well-done media blitz running up to the movie’s release. The anticipation definitely had a payoff. It was amazing– amazing and filthy and so much fun. Deadpool, FTW.