The 1970’s science fiction/action anime Battle of the Planets was my first coherent experience with Japanese animation, and it left a long-lasting impression. I still get a little excited about Mark, Jason, Princess, Keyop, and Tiny! The Fiery Phoenix! Chief Anderson! Seven-Zark-7! And Zoltar, wonderful, evil, lipsticked Zoltar from the planet Spectra! Battle of the Planets is sometimes credited with introducing anime to the West, but when I first laid eyes on it I wasn’t thinking about the big cultural picture—I was only a kid. Instead, I made sure I was home in front of a TV, any TV, every single day when my show came on. It was the most amazing thing I’d ever seen.

G-Force, from Battle of the Planets. Pretty darn amazing.

Battle of the Planets was the first of several adaptations of the Gatchaman material and is probably the best known. It was first broadcast in the United States in 1978, and was also adapted and dubbed for multiple other markets, including the Dutch, French, Italian, Spanish, Greek, Polish, and the Middle East.

The company responsible for Battle of the Planets’s Americanization, Sandy Frank Film Syndication, invested quite a bit of money and talent into their production and generated two seasons’ worth of episodes from the source material. In this adaptation, primary characters were voiced by the golden-toned Casey Kasem, Ronnie Schell, The Jetson’s Janet Waldo, Mr. Ed’s Alan Young, Alan Dinehart, and Keye Luke. Additional animation sequences were provided by Gallerie International Films, Ltd.

As was to be expected, the original series, Science Ninja Team Gatchaman, was heavily edited for juvenile American audiences when Sandy Frank set about repackaging it. Since the Gatchaman episodes were not translated in their original order, Battle of the Planets lacked quite a bit of the original’s continuity as rewrites to create continuity occurred. 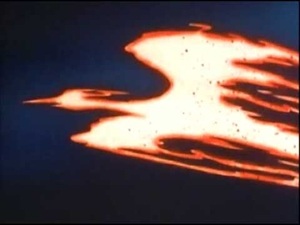 Battle of the Planet’s Fiery Phoenix

Other edits created different continuity issues. In the interest of child-friendly programming, storylines were altered and on-screen deaths were edited out and the vaguely R2D2-ish robot 7-Zark-7, his robotic dog 1-Rover-1, and his disembodied love-interest Susan, were all added as filler and to provide explanations for what was obviously cut from the Gatchaman originals. New, animated stock footage of the Phoenix and outer space was also used to fill in blanks left by heavy editing.

In addition to the changes to the content, there were plenty of changes to the characters. Some were simple name changes– Spectra became the enemy planet rather than Galactor. The original Japanese character names were Anglicized to Mark, Jason, Princess, Keyop, and Tiny, and reference to their bird identities was dropped. Science Ninja Team became G-Force, and all the G-Force team members were orphaned, with the exception of Keyop—he became a genetically-engineered clone. Their nemesis, Zoltar, though, went through the most dramatic alteration. Originally, the character was a complex fusion of a male and female set of twins who alternated sexes at will. This was obviously not going to fly for U.S. audiences in the seventies, so Zoltar was remade as a somewhat androgenous man, and his female aspects spun off into minor female characters in their own rights. Even with the changes, there was still plenty of fast explaining to do in the later episodes. 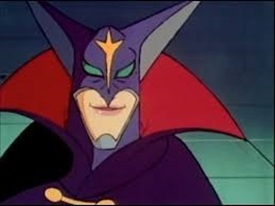 Alas, like all good things, Battle of the Planets eventually ended. Despite broad international syndication, only two seasons of the edited and redubbed Battle of the Planets were produced and aired. Sandy Frank had planned a number of first-run, original episodes but they were never completed. Alternative versions of some episodes were made but never aired.

Interest in the show continued sporadically if not productively over the next couple of decades. In other media, Gold Key produced a short-lived comic book adaptation of the show in 1979, and Top Cow issued their unsuccessful comic series intermittently from 2002 through 2004. Sandy Frank had also hoped to create a new version of Battle of the Planets in 2004 using the episodes of Gatchaman that had been left out of the original series adaptation, but cost and casting were issues and the project was scrapped.

The appeal of G-Force is still exists, though. There are currently rumours that Nelvana (who has done some other work of interest I mentioned here) plans to release a reboot of Battle of the Planets in 2017.  I know I wouldn’t say no to another go-round, even with 7-Zark-7.