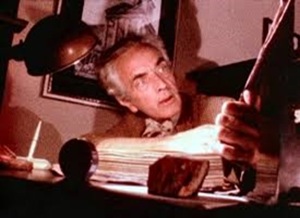 The fantasy, science fiction, and horror author Fritz Leiber is a man whose creations inspired generations of RPGs and their players. Even if you don’t know his name, you know his work. He was close enough to Gary Gygax and company to contribute an article to the very first issue of The Dragon magazine. If you play any D&D-style RPG at all, you’ve brushed up against his creations. I highly recommend experiencing them in their original form.

Fritz Leiber was born to a pair of Shakespearean actors, and studied philosophy and theology before trying his hand as a college professor for a while. He worked in aircraft production during World War II. After the war he became a staff writer for an encyclopedia and then served on the staff of Science Digest before launching his fiction career in earnest. Although he produced a substantial number of works considered “science fiction,” Leiber himself admitted that much of that body was rewritten fantasy, repackaged to escape the post-war contraction of the fantasy market.

Leiber’s strongest early influences were Lovecraft (particularly the Cthulhu Mythos, which inspired a novella and multiple stories) and his close friend, Harry Otto Fischer. Beginning in 1934, Leiber and Fischer began imagining a loosely-connected saga centered on the barbarian Fafhrd (modelled on Leiber) and the thief, the Gray Mouser (after Fischer).

In 1937, well before Leiber had written the first story, Leiber and Fischer also developed a wargame for themselves set within the world they had created. In 1976 they turned their personal game into a board game called Lankhmar for TSR. TSR also licensed Leiber’s mythos for use in its Dieties and Demigods supplement for Dungeons and Dragons. The tropes developed within the canon of Fafhrd and the Gray Mouser stories were a huge influence on the game. 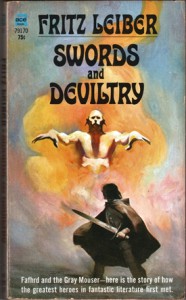 Leiber is credited with coining the term “sword and sorcery” to describe his richly imagined Fafhrd and the Gray Mouser series and other works in its style. The characters were introduced in 1939 in Unkown magazine, a title edited by the influential John W. Campbell. This also marked Leiber’s first professional sale. Campbell also bought Leiber’s first two novels, serializing Conjure Wife in Unknown and Gather, Darkness in Astounding.

Although Leiber wrote many significant stories and novellas over his long career (some of which are listed below), his most enduring contributions are Fafhrd and the Gray Mouser and their adventures in Lankhmar and beyond. Leiber’s writing could be weighty, but he injected his stories with dark humor and originated many of the conventions now commonly recognized as the sword and sorcery subgenre.

While Leiber’s characters did not become as instantly recognized by name as Conan or Cthulhu, they could not be ignored, either. Robin Wayne Bailey (founder of the Science Fiction Hall of Fame) continued their legend by writing an additional Fafhrd and the Gray Mouser novel in 1998, with the promise of another. Joanna Russ (producer of brawny feminist fantasy and science fiction) was inspired by Leiber’s characters and saw her own adventurer, Alyx, appear in two of their stories. The late Terry Pratchett cheerfully modeled his city Ankh-Morpork and characters the Weasel and Bravd on Leiber’s creations.

As an aside to his fiction Leiber also wrote a small amount of literary criticism, most of which was collected in Fafhrd and Me (1990). This work includes a number of essays on Lovecraft, who was hugely influential on Leiber’s writing and who inspired several stories set within the general Lovecraft Mythos. Unlike many other authors working in the Golden Age of science fiction, Leiber wrote very little by way of nonfiction, with his interests and talents better aligned with the philosophy-inflected fantasy he favored. The vast majority of Leiber’s body of work was short fiction, with some of his modern-day horror stories inspiring, according to the Encyclopedia of Science Fiction, the emerging sub-genre of “urban fantasy.” 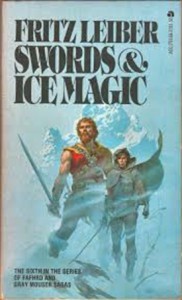 Fritz Leiber’s Fafhrd and the Gray Mouser, again, in Swords and Ice Magic

While Leiber would occasionally drop out of sight for varying lengths of time, he did not labor in obscurity. He was a founding member of the Swordsmen and Sorcerer’s Guild of America with such notables as Lin Carter, C.L. Moore, L. Sprague de Camp and Andre Norton, among others. Leiber won six Hugo Awards, four Nebulas, three World Fantasy Awards, and two British Fantasy Awards. Even in the years he did not win, Leiber was a frequent, sometimes multiple, nominee. Leiber was also named Gandalf Grand Master and SFWA Grand Master, and received Lifetime Achievement Awards from the Horror Writers Association and at the World Fantasy Convention. He was posthumously inducted into the Science Fiction and Fantasy Hall of Fame in 2001. His work was of such influence that he continued to receive nominations for his story collections a decade after his death.

If you have made it this far, you probably would like to read more. To get you started, the following is an extremely abbreviated bibliography of Leiber’s collections, novels, and stand-alone short stories:

Fafhrd and the Gray Mouser Collections:

Gather, Darkness! (1943), a post-apocalypse theocracy where science is witchcraft

The Dealings of Daniel Kesserich (1997), a rediscovered Lovecraftian novella from 1936

The Best of Fritz Leiber (1974), which collects twenty-two of his many short stories

“Smoke Ghost”, where urban pollution is the monster

“Space-Time for Springers” features a genius kitten as its hero, and is one of my favorite stories, ever

“To Arkham and the Stars”, a Cthulhu Mythos story

“Gonna Roll the Bones”, a winner of both the Hugo and Nebula awards

If you want to dive into Leiber’s works, many of them are available here and here. Sometimes, we have to look behind us to see how we got to where we are—and looking back at Fritz Leiber gives us a very good idea.