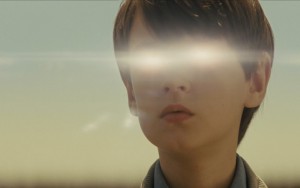 Midnight Special is one of those movies I wanted so much to love. I liked it—a great deal, actually—and I recommend it highly for its emotional depth, but I feel the holes and unevenness of the story-line derailed its shot at greatness. There is genuine warmth alongside its danger, and real humanity with its science fiction. There are also too many opportunities to question the how and why of it that pulled me out of what was otherwise a thoughtful and well-made film.

Written and directed by Jeff Nichols, Midnight Special has a similar feel to Spielberg’s work in many ways, with sincere sentiment, strong family connections, and a warm glow. In addition to that influence Midnight Special is also obviously a labor of love, which is perhaps why Nichols has difficulty drawing the line between the mystical and the concrete as the story progresses.

Midnight Special begins with great promise in a setting rich with potential—a heady mix of supernatural powers, other dimensions, fundamentalist cults, and the feds—but after a strong start the plot loses its initial focus and the action sags. A great revelations comes midway into the movie and the momentum is hard to regain. At one point, three characters are simply standing around in a parking lot for what feels like an eternity of screen time. Missteps like that trip up the storytelling and weaken its power.

And this is a powerful story.

In brief, Midnight Special is about an extraordinary child born to members of an apocalyptic cult in rural Texas. The boy’s father and the fathers’ best friend escape with him on the cusp of his triggering a possibly devastating, possibly transcendent supernatural occurrence. The cult wants him back and is in hot pursuit. So is the federal government.

In a way, Nichols gives us too much and not enough all at once. The mysteries felt a little too explained, to me, as if he were trying to make them plausible or at least narratively consistent, and stopped in medias res. He wants to convince the audience that there is a spiritual logic behind the ranch group’s worship with evidence that doesn’t tie together. He offers revelations from the federal investigation that reveal nothing. He offers reasons for keeping Alton in the dark that, even when described, don’t fit anything we have seen. I feel Nichols’s script would have been stronger if he had actually left out more details—let the faith be blind, let the phenomena be inexplicable, to preserve the sense of wonder he works so hard to evoke. 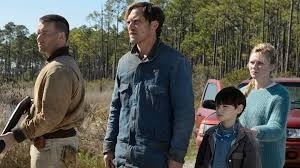 It’s about friends and family in Midnight Special

A large part of that wonder can be attributed to the actors. The cast is strong, the acting natural, and the characters are all realistic despite the events all around them. As the supernatural boy, Alton, Jaeden Leiberher is perfect with his small, serious face and matter-of-fact intelligence. Michael Shannon and Kirsten Dunst as Roy and Sarah, Alton’s parents, are convincing in their pain, belief and intensity. Joel Edgerton’s Lucas, Roy’s best friend, is forceful and solid as a now-rogue state trooper who has come to believe in Alton’s potential divinity. And as the NSA agent Paul Sevier, Adam Driver brings quiet competence and a clear-eyed willingness to his character as Paul is also drawn in to Alton’s supernatural world.

All the characters move under great weight, but they are not crushed by it. They endure, and they believe. Alton’s vulnerability, his parents’ love and faith, Lucas’s friendship and dawning belief, Paul’s openness to something more in the world, all form the core strength of the movie. Alton’s power may drive the plot, but human connection makes it work. 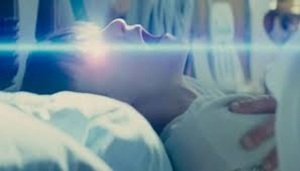 Too much power for a little boy

The visual imagery used to show Alton’s power is spectacular and shocking—even to someone steeped in blockbusters–and still so very convincing in its context. At points Alton suffers from the abilities he cannot control, and the audience can’t help but feel his pain with him. But it isn’t clear how a boy with seemingly so little control over his own abilities can be a solace as well as a threat. He is made out to be part radio, part laser, and part warhead. The risk of being close to that seems overwhelming, and Alton’s magic loses some of its transcendence when Nichols begins trying to explain it piecemeal.

Flaws and all this is still a beautiful film, surprising, sweet, and moving, but I think it lacks the power to rise any farther than that. It is still worth seeing, even more than once, for the fine acting and the striking cinematography. It plays like an affectionate amalgam of Close Encounters, Firestarter, and Starman, and despite some startling effects and spare but jarring violence, Midnight Special is at heart a gentle film. It does not bear too much analysis. But even with its imperfections and inconsistencies it is worth seeking out.