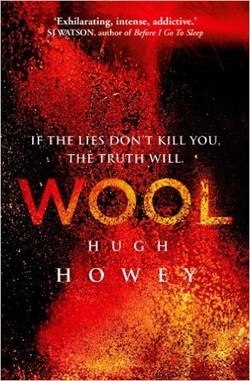 In my experience, the bigger the hype, the bigger the disappointment. And so it is with Hugh Howey’s Wool, the first of his Silo saga. Wool began its climb to fame as a self-published series of short stories. Then those various pieces were collected into a novel when Simon & Schuster picked up the property. But despite the attention of a mainstream publishing house, its amateur origins show. While the novel gained considerable word of mouth buzz (including rumors that a film version might be directed by Ridley Scott), I think its literary shortcomings dim the luster and make the glowing cover blurbs seem completely overblown. Wool is reasonably entertaining, and may be in the vanguard of the new way of publishing, but it is a long way from great.

The basic idea is intriguing—a society contained entirely inside a deep, underground silo, the descendants of the last human survivors of a world-killing war. And the plot itself is plain and solid, with secrets, factions, civil war, and plenty of action. But the execution is blunt and unpolished, with several main narrative components suffering from it.

The first issue I have is with Howey’s character development. Wool presents as a typical teen dystopia—except it has a cast of adult characters who do not seem to have grown emotionally since their adolescence. The stubborn behaviors, the angst, the absolutism, the weepiness, would all make more sense if the characters weren’t mostly in their thirties. Overall, Howey’s silo inhabitants are not particularly well-drawn or differentiated, with even the main protagonists being plot-driven rather than drivers. The few who do stand out, though, demonstrate a profound lack of realism.

As a surprise survivor in another underground silo, Solo (Solo? Really?) is written like a mentally challenged child, not as a fifty-ish man who has spent most of his life in isolation. He jumps around like a preadolescent, although he was supposed to have been sixteen when he was left alone.

And as the chief antagonist, IT head Bernard is an almost comically hackneyed villain with his mustache, pot belly, and Napoleonesque habit of putting his hand inside the front of his overalls. He is grandiose and megalomaniacal and every bit the cartoon tyrant.

At intervals, Howey tries to add some flavor to his cast. “I just don’t figure he was happy up there. That weren’t his home” (184) is his repeated attempt at differentiating characters—the ones he would have us identify as older, good men. Unfortunately, inserting a few random country twangs into a limited, otherwise homogeneous (if stratified) population doesn’t ring true and does nothing to make those characters into individuals. 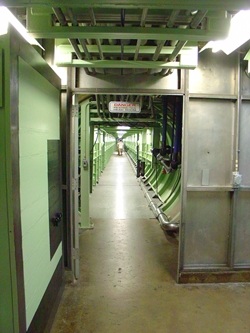 Howey seems to have done only cursory research on the physical aspects of the novel’s world, relying instead on his imagination to flesh it out. This makes many of his constructions come across as unlikely and conceptually flawed. Too many details are seemingly thrown in only to make the situation seem futuristic, and they do not bear much scrutiny before they fall apart—the giant spiral staircase as a highway for the entire population, the inefficient reliance on human porters, the ubiquitous, color-coded overalls, pig’s milk as a beverage, corn growing in underground farms, mining and oil drilling directly below the silo, rotten soup and intact bodies still existing after thirty four years. It all goes back to the old saw of “write what you know”—which doesn’t mean write what you have experienced, but what you have studied and understood. Howey didn’t.

In addition to the awkward and unlikely details, there are some really excruciating descriptions to be found here: “His husband eyes swam behind tears while he allowed his dutiful sheriff-self to intervene” (24); “The clouds…loomed like worried parents over these smaller darting eddies of windswept soil, which tumbled like laughing children, twirling and spilling, following the dips and valleys as they flowed toward a great crease where two hills collided to become one” (44); “Here was where silicon chips released their tangy scent as they heated under the strain of crunching data” (204). The messy attempts to build atmosphere only serve to show how rough this Wool really is. 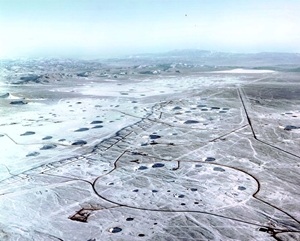 As an extension of the weak characterization and the bad prose, Wool is riddled with pervasive fifties-style sexism and gender-roles that seem an odd social trait to retain, post-apocalypse. For example: “The deputy possessed that distinctly male quality of pretending to know where he was, even when he didn’t” (90); “There’s this ritual, a man asks a girl’s father for permission” (152); in reference to a twenty-seven year old man, “She smoothed the front of her red overalls and allowed Lukas to help her to her feet. She puckered her lips, and he presented his cheek. “My little boy,” she said, kissing him noisily and squeezing his arm” (410); and the hyper-traditional “Young children lumbered reluctantly off to school; husbands and wives kissed in doorways while toddlers tugged at their overalls and dropped toys and plastic cups” (146). Howey evokes a social structure that harkens back to an idealized mid-century rather than putting the energy into something organic. I found it off-putting and a little weird, unless Wool’s world ended in 1960.

The story picks up considerable momentum in the last hundred pages and becomes a reasonably compelling read, but the damage is already done. The improvements in the home stretch can’t disguise that Wool is overall rather artless, and the weak characterization, ungainly descriptions, and ill-conceived mechanics all combine to make this novel a prime example of the pitfalls of big hype. It’s an interesting story idea, passably told, and an amusing enough read. Not much more.