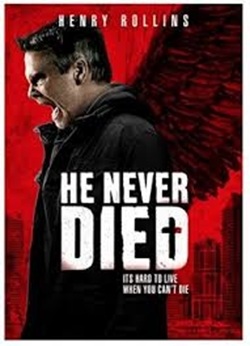 He Never Died is a small-scale horror movie that just happens to star Henry Rollins. That was quite enough to get my attention.

Now, I haven’t checked in with Henry Rollins in a couple of decades. It’s good to see that he hasn’t changed much at all. He is still physically imposing, sharp-eyed, and stern. He also has great comic delivery. The starring role he takes on in He Never Died is a real showcase for what he can do.

A few spoilers are coming.

The movie itself is lightweight, with a number of weaknesses. But the script is surprisingly funny, with Rollins’s deadpan performance turning joking lines that border on witty into actual laughs.

Rollins’s character, Jack, is a man of few words. He expresses himself with many eloquent, put-upon sighs and a few unnatural roars. He is slightly chattier than Rowdy Roddy Piper, but not by much. His Jack is a man with big scars, many tattoos, and a purposely limited life. He doesn’t work, drive, drink, or socialize. He eats at the same diner every day. He plays bingo at the local church three nights a week. He buys mysterious contraband from a rogue medical intern every few days. He also happens to be immortal. “I’m in the Bible if that means anything,” he offers by way of explanation.

Then his previously unknown nineteen year old daughter shows up with the intent of getting to know him and interrupts his routine. And soon after, somebody is out to get him.

Rollins is a funny man—he knows how to play this character for all its worth, and his delivery is so dry as to be purposefully ironic. His Jack is so literal, and so sub-clinically annoyed by the people around him, that his reactions can’t help but be funny.

So when Jack is finally prodded to open up to an interested waitress, he recites a resume that includes everything from truck driver, soldier, horse breeder, tinsmith, blacksmith, retail manager, cook, and businessman to prison inmate, medic, and farmer. It is like he is reciting the phone book from memory—or recreating the list of shrimp dishes from Forrest Gump.

Here are a few more of the many, many examples of his dialogue that made me laugh in this movie:

How will Jack find someone to do what he wants? “Money. People like Money.”

How did he get maced in the eyes by his aged landlady? “She’s spry.”

Why is he using pliers to pull bullets out of his forehead? “If I leave the bullets in it’ll heal over and I’ll get migraines.”

It’s hard not to love this.

Yes, there is a heavy-handed religious theme running through the action—less in-your-face literal iconography (that is reserved for the promotional art) than a handful of repeating symbols and figures of unavoidably obvious portent. We aren’t allowed to miss them.

Rollins as Jack, having a bad day

He Never Died is not a subtle film, and I think it wishes itself to be more clever than it actually achieves. The plot is pretty much a straight line, with the attempts at giving it a crime mystery to supplement the horror playing as awkward rather than deep. The convolutions built into to the story seem simplistic and underdeveloped, not true machinations but things for Jack to do that will let him show off his powers. The inherent violence in the tale is uneven, presented as either over-the-top gore or oddly restrained take-downs that coyly stop before real damage occurs or refrain from showing it.

While Henry Rollins is unmistakably the star, the other actors (Booboo Stewart, Kate Greenhouse, Jordan Todosey, and Steven Ogg, among others) are enjoyable to watch in varying degrees, with their characters’ weaknesses coming in large part from the thinness of the script. None but Rollins rises to great (but let’s face it, everyone except Rollins is effectively a plot device in this), but all are good enough to make this a solid little film.

Still. He Never Died resonates with me like some sort of cheerful, mutant offspring of They Live and The Prophecy. It’s the kind of movie that you can watch repeatedly and still have fun with. And I think that Henry Rollins is to thank for that.

1 thought on “He Never Died: Deadpan Horror with Henry Rollins”