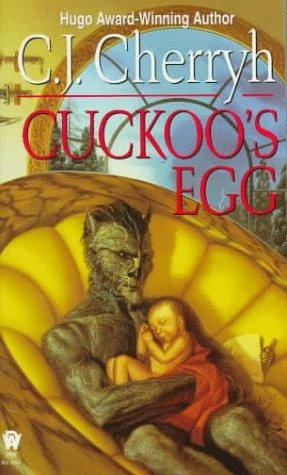 The cuckoo is a bird best known for laying a single egg among the clutch of another species, in order that its chick be raised by the other parents. Cuckoo’s Egg, C.J. Cherryh’s short stand-alone 1985 novel, is about a very similar occurrence. It is a closely-told tale of human and alien interaction set in a vividly imagined—if thinly described–world that is revealed mainly through suggestion and reference instead of direct depiction.

The prolific author of a number of sweeping science fiction series, C.J. Cherryh’s storytelling technique is distinctive. She is known for using a third person subjective point of view so limited it is essentially internal. Cuckoo’s Egg is a striking example of the technique. The text is loaded with parentheticals that transcribe the main characters’ in-the-moment thoughts and reactions as they occur inside the third person POV. Consequently, we experience the narrative not just through their perspectives, but as their private understandings of their world and circumstances.

It’s easy to forget just how much of our own everyday environment we ignore, taking its familiarity for granted. We know what everything is and do not pause to think why it is, or what it looks like. We do not describe to ourselves the chairs we sit in every day. We just sit in them. We do not explain to ourselves the different forms of formal and informal address we use socially. We just use the right one for the situation. We learned all the rules and no longer dwell on them. Cherryh’s writing is like that. Her characters inhabit a familiar world. They are not going to mull over the layout of their own bedrooms for our benefit.

And ultimately, that stripping away of extraneous detail allows us to be fully inside the characters’ minds.

Cuckoo’s Egg is told almost entirely through the two primary characters of Duun and Thorn, alternating only as the explicit needs of the narrative demand. Cherryh does not waste words with lengthy exposition for the audience. She opts for immersion.

The set-up is straightforward, and the story begins without preamble. Duun, by description an alien adult, has just become the caretaker of Thorn, by description a human infant. Except that in Cuckoo’s Egg, it is Thorn who is the alien being. “Shonunin were naked when they were born, but downed in silver that quickly went to dapples and last of all to gray body coat and black on limbs and ears and crest. Duun held the creature on its discarded wrappings, on his knees, and its downless skin was naked and pink as something lately skinned, except for a thatch of nondescript hair atop its skull” (1-2).

The details are fine and intimate, and in their intimacy give an intuitively coherent picture of the race and culture involved: “He held it as if it were a shonun child and washed its eyes with his tongue (they tasted salt and musty). There was nothing he spared himself, no last repugnance he did not overcome. Such was his patience” (9). 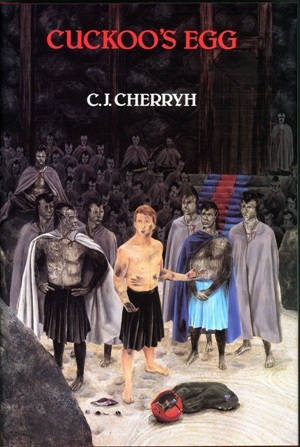 The Shonunin are a neatly-imagined alien race, although I hesitate to use the word ‘alien’ to describe them. The story told is ultimately theirs, the world it happens on is theirs, and as the sole human character, Thorn is theirs as well, having never known another world or another people. Physiologically and psychologically, the Shonunin are reasonably compatible with humans. They are distinctly humanoid. The environment of their planet is comfortable for human life. Their family structures are not dramatically different. They are a technologically advanced species who have not yet conquered space. While the familiar details of the Shonunin form and culture are the plot device that makes the whole story possible, they also serve to blur the line between human and alien from a reader’s perspective.

Duun raises Thorn in isolation as closely as possible to how he would raise a Shonun child, training him as a hatani (perhaps best explained as a warrior-judge) and protecting him. Although Thorn is aware that he is different from Duun, he is not entirely aware he is another species. That is forced upon him when he accidently bursts into a Shonun settlement: “He spun on his heel and ran. He heard doors slam, more than once. Heard running come towards the fence, heard voices at his back. ‘Gods, it’s him!’ one yelled, and others took it up. ‘It’s that thing—that thing!’” (41).

At times the effect is a little disorienting, to see a member of our own species described by another species in the terms we would use for some strange, half-legendary creature: “(“When you get used to him he’s beautiful,” Sagot said. “Frightening, like some big animal you’ve gotten closer to than you wanted. But you want to watch him move. There’s a fascination to such things, isn’t there?”)” (107). Viewed both as monster and as beast by most of the Shonunin, and a threat to their way of life, Thorn is dehumanized and depersonalized in ways those words don’t quite adequately encompass. It is a slightly unnerving position from which to experience the story, and a slightly uncomfortable way of looking at what we take for granted as humanity and personhood. It is like reading history from another nation’s point of view. 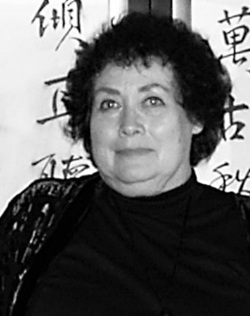 The Grand Master herself, C.J. Cherryh

The political, scientific, and cultural landscape in which Thorn is raised is complicated and for the vast bulk of the novel only obliquely explained. The backstory and its influence on Shonun civilization is not revealed until the last twenty-odd pages, when Cherryh at last foregoes her usual reserve in an enormous, finally detailed explanation that allows the novel’s conclusion to be both satisfying and loaded with a heady ‘What if?’.

So my conclusion is this: Densely detailed, occasionally inscrutable, emotionally sensitive yet action-packed, Cuckoo’s Egg is, I think, a solid starting point for anyone wishing to sample C.J. Cherryh’s work, and an excellent point to revisit if you already know how good an author she is.