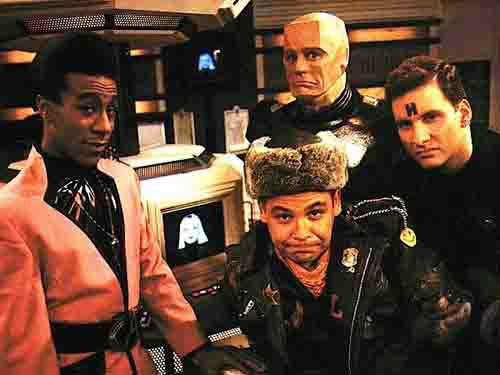 Before the wonder of the interwebs, there was the wonder of public broadcasting—and its heavy reliance on British television series for content. PBS introduced me to the surreal world of Monty Python’s Flying Circus, the sarcastic one of Black Adder, and the utterly silly one of the plucky, persistent Red Dwarf.

While less pop-culturally ubiquitous than some other shows I could name (cough*Star Trek*cough), the BBC science fiction series Red Dwarf is a lovably dopey, deep-space, time warping  adventure that originally aired in 1988 and has chugged along (with some intermittent down time) ever since. Fueled by ideas from their 1984 radio sketch series Dave Hollins: Space Cadet, Rob Grant and Doug Naylor created Red Dwarf as a half-hour situation comedy. It is something of an acquired taste, being goofy and jokey rather than going for a cutting wit, but I found it hard not to fall in with the simple fun of it.

The Red Dwarf of the title actually refers not to the star type, but to an enormous mining ship where the show’s action happens. Our story begins some three million years in the future with the awakening from stasis of one Dave Lister (played by Craig Charles), the Red Dwarf’s lowest ranking crewman and possibly the last surviving human. Because of a malfunction in the stasis equipment, Lister managed to ride out a radiation leak that killed (almost) everyone else aboard ship. Chris Barrie plays the aptly named and insufferable hologram Arnold Rimmer (Lister’s former supervisor), who, when alive three million years ago, caused the radioactive disaster that killed the entire crew.

To add to the social mix, Lister’s pregnant cat also managed to escape the disaster, and now her mutated descendant, Cat (Danny John-Jules), is a suave humanoid with excellent taste in clothing and generally feline habits. There is also Kryten (played for the bulk of the series by Robert Llewellyn), a rather neurotic service mechanoid salvaged from another wrecked ship, as well as the Red Dwarf’s senile computer, Holly (played alternately by Norman Lovett and Hattie Hayridge). Lister even gets a love interest, the intermittently dead Kristine Kochanski (played by Clare Grogan and then Chloe Annett), who joins the main Red Dwarf crew from another dimension. 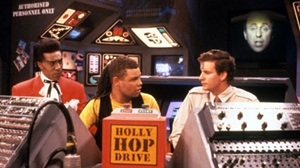 With a set-up like this, it’s no surprise that over the course of the ten aired seasons there were several wacky evolutionary outcomes, a few parallel universes, random visitors, distorted time, assorted slobbishness and priggery, and a great deal of pining for Fiji and Indian food. (Truly, the last episode I recall in any detail involved–surprise!–time travel and leftover chicken vindaloo evolving into a monster.) Fertile comedic ground, that. In addition to its own signature bits, the show referenced and parodied a wide variety of movies, only some of them science fiction. Star Wars, The Terminator, and Blade Runner were all fair game, but so were High Noon, Pride and Prejudice, and Casablanca. With all of humanity dead, someone had to keep the culture alive.

At the height of the show’s popularity in 1992 there was, of course, an attempted American version that tried to copy too much from the original and quickly lost its way (John Laroquette in Fawlty Towers, anyone?). Called Red Dwarf USA (how original), this version never made it beyond two different takes on a pilot episode. Cast and then recast with mainly American actors and retelling the first episode of the original series, the script underwent what became a largely-unused rewrite by Grant and Naylor in an effort to make it, well, funny. Ultimately neither pilot was ever broadcast, and the plan to Americanize Red Dwarf was abandoned.

The show originally ran from 1988 through 1993 then from 1997 through 1999, returned as a miniseries in 2009, and began a new series run in 2012. The first six series were written by the original team of Rob Grant and Doug Naylor. Then, in 1995 Grant left the show. While Naylor continued producing the scripts with the contributions of various other writers, Grant’s leaving had a serious impact on the show’s long-term survival. There was a three year gap between series VI and VII, and the BBC declined to continue with a series IX. An animated Christmas special made in 1999, but the series itself did not return until a rather meta, three episode miniseries (IX) was broadcast in 2009. This continued the tradition of convoluted timelines by having the Red Dwarf characters travel backwards to return as characters in a Red Dwarf TV show airing in 2009. Series X aired late in 2012, and series XI expected to air sometime in 2016 and XII in 2017. 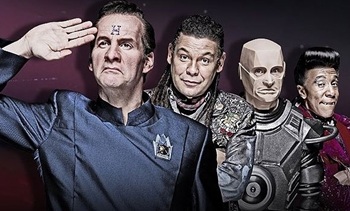 The crew of Red Dwarf, still lost in spacetime

Doug Naylor has been working on a film version since 1999, but funding and script issues have prevented it (so far) from happening. However, his creation has still made it past the small screen. Red Dwarf has inspired its share of novels, with two written by the collaborative persona of “Grant Naylor” and another two written individually by Doug Naylor and Rob Grant. It also spawned a magazine called Red Dwarf Smegazine which had its run from 1992 to 1994. Red Dwarf: The Roleplaying Game was released in 2003 to positive reviews. And more recently, an Australian theater group has staged their own versions of selected episodes.

But these are the expected ups and downs of a long-running franchise. So even though the heyday of Red Dwarf  has passed, love for the show goes merrily on. The first ten seasons’ episodes are widely available for sampling, and the interactive official Red Dwarf website is an excellent source for updates, merchandise, convention information, and fan-club links if you chose to dive all the way in. I advise it. They are quite an active community. And they probably have vindaloo.