I hadn’t planned on writing about 10 Cloverfield Lane this week. And even though it looked like it would be good, I hadn’t planned on even seeing it before it made it to cable, content to let it get lost in the lead-up to Batman v Superman: Dawn of Justice and dismiss it as just a sequel to a movie I hadn’t seen.

Only loosely connected to the original Cloverfield, 10 Cloverfield Lane was kept very effectively under wraps until its release. The previews strongly suggested a siege-mentality monster movie. But the previews lied. 10 Cloverfield Lane is actually a frightening and finely constructed character study disguised as an alien invasion movie. By the time the explosions and the CGI monsters show up, the best, most fascinating, and most terrifying part of the film is behind us.

An uncomfortable moment at 10 Cloverfield Lane

Many well-made action and horror movies rely on strategic overacting from their leads, to allow the human characters to keep up with the loud and boisterous CGI going on all around them. 10 Cloverfield Lane goes the other way—its leads have to underplay their characters. The setting is so narrowly focused and so intimate that emoting would have ruined the admirable amount of tension built into the story.

All the actors were excellent—with a cast of only three, they had to be. They each brought a depth and completeness to their characters that is often given short shrift in favor of moving a plot along. Here, character and plot development moved together.

Mary-Elizabeth Winstead as the POV character, Michelle, does a convincing job of creating a genuinely competent character—there is none of the too often used heroism-from-nowhere showboating, here. Michelle is always shown to be a smart, creative, and capable person (with a single, bluntly explained character flaw), and her attempts to save herself grow directly and believably from there.

As the third-wheel character, Emmet, John Gallagher, Jr. demonstrates an intelligence and sympathy in the role that makes Emmet’s sacrifice more than just a dramatic shock. Emmet may not be as clever as Michelle, but he trusts the case she builds against John Goodman’s prepper, Howard, and is fully committed to their escape.  Emmet is portrayed as a fundamentally decent fellow, long familiar with Howard and so unable to clearly gauge the threat—in Emmet’s experience Howard has always been a little weird, but not really dangerous.

And for most of the movie, that seems like it could be true. Or not. The signs point both ways, and interpretation depends greatly on the angle you read them from.

And because of that incredibly nuanced uncertainty, John Goodman owns this movie. Goodman underplays his Howard to devastating effect as a man who has had the opportunity to stew in his own juices too long to recover from the experience. I believed him completely as Howard struggled with his temper and paranoia, his lies and his desire to be loved, his uncomfortable attempts to be polite and proper.  Howard is so frightening because we all know someone kind of like him, a little uneven, a little paranoid, a little absolutist in their thinking, a self-described nice guy who has been screwed over by someone and who still gets mad about it long after anyone else would have let it go. 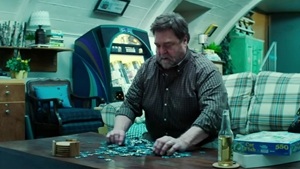 Puzzles within puzzles at 10 Cloverfield Lane

Goodman’s compelling portrayal of Howard Stambler reminded me in some ways of Heath Ledger’s Joker. There is artistry in it. You know something’s off, but the true scope of the menace, of the madness, is so subtly played that when it is finally laid bare it stings like a slap in the face. There are so many hints to the true danger that could be easily read as mere quirks, but they build inexorably into a shocking scene that, while it is a truly unexpected jump-scare, is not for me the genuine terror. That comes after, when Howard appears at Michelle’s door, shaven, neatly dressed, and ready to be a family. That’s when we get to see how dire the situation is, when Michelle’s fate is laid out clearly before her and the mercy of a straightforward bullet to the head isn’t in it.

10 Cloverfield Lane does stumble at a couple of points, and especially in its conclusion. There are times when the mechanics of the plot are too close to the surface. There is the wrenching acid barrel scene, where Michelle’s inability to act to save Emmet—her declared character flaw–is held up for the audience in case they forgot about it. And having Howard morph into a typical maniac to make Michelle’s final escape attempt more exciting comes across as lazy writing. It is exciting, in a cheap way, but does nothing to add real tension to the danger Michelle faces and quite a bit to take away from the credibility Goodman has established for Howard.

The end is actually a disappointment to me. Having escaped—no, having conquered—Howard’s bunker, Michelle’s impromptu battle with the aliens feels hammered-on to link this movie to the first Cloverfield (as, indeed, it was—the original script was titled The Cellar). By the time we get to the aliens enough has happened already, the audience’s emotions have been thoroughly wrung out, and additional action sequences seem gratuitous.

So in short, I think 10 Cloverfield Lane is a must-see for the superb acting (I’m going to say it now: give John Goodman the Oscar. He’s earned it.), and take or leave the last fifteen minutes as you will. It’s intense and frightening and convoluted enough without them–because an alien invasion has nothing on John Goodman.