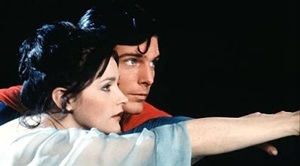 Superman may be the Man of Steel, but a Man of Steel does not live by heroism alone. In 1971, before the famous Christopher Reeve movies and the romantic getaway at his Fortress of Solitude, the inimitable Larry Niven (Ringworld, The Man-Kzin Wars, and many productive collaborations) decided to address that crucial facet of Superman’s existence—his sex life, the possible lack thereof, and the implications for his species and for humanity of him having one. The result is the short story “Man of Steel, Woman of Kleenex”, a snidely hilarious pseudo-clinical discussion of the carnal possibilities that is part speculative lab report, part contemplative essay, and wholly TMI.

Now, I’m not terribly familiar with the minutia of Superman’s legend, but I know that with his current grittier reimagining this might become more relevant than when he was the idealized all-American alien boy. Still. There’s a lot of skin peeled back here. Niven takes the question of interspecies humanoid sex to its neatly argued, logical conclusion in a charming display of reducto ad absurdum. It’s clear he’s having fun playing the little game he’s come up with. And it’s a good game. Let’s start with some of Niven’s ground rules: 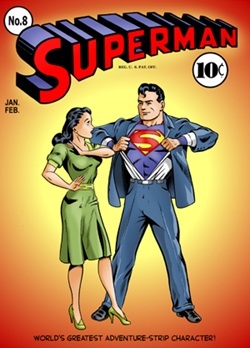 Superman, the Man of Steel, showing off.

“Superman’s sex problems are strictly physiological, and quite real. The purpose of this article is to point out some medical drawbacks to being a kryptonian among human beings, and to suggest possible solutions. The kryptonian humanoid must not be allowed to go the way of the pterodactyl and the passenger pigeon.”

Niven begins with the simple premise that Superman, at the time of his writing thirty-one years old and strappingly healthy, must be lonely for Kryptonian female companionship and a family of his own. His only option is terrestrial. He’s going to go for it. What could possibly go wrong?

Well, on a basic sociological level, there’s this: “A mating between Superman and Lois Lane would feel like sodomy-and would be, of course, by church and common law.”

From there the speculations become a bit more…graphic, as Niven theorizes on the actual physical effects of Kryptonian/Earthling love. The descriptive title Man of Steel takes on some interesting nuances within that context, and Niven deftly illustrates and then rules out the possibility of successful interspecies in-the-flesh romance.

But what of Kal El’s responsibility for carrying on his species? Why not assisted reproduction? That should work!

“All known forms of kryptonian life have superpowers. The same must hold true of living kryptonian sperm…They scatter without regard to what is in their path. They leave curved channels, microscopically small. Presently all will have found their way to the open air.That leaves LL with several million microscopic perforations all leading deep into her abdomen. Most of the channels will intersect one or more loops of intestine.” 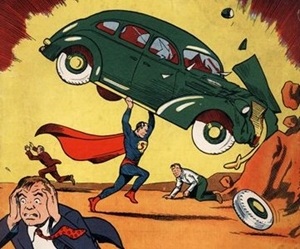 A frustrated Man of Steel

The potential damage such potent cells could do is expounded on at some length. And the damage would not be limited to the innards of a human female. These little suckers would shoot through Metropolis like rockets, destabilizing infrastructure and causing war-like devastation as they escape, looking for love: “Metropolis is shaken by tiny sonic booms. Wormholes, charred by meteoric heat, sprout magically in all kinds of things: plate glass, masonry, antique ceramics, electric mixers, wood, household pets, and citizens. Some of the sperm will crack lightspeed. The Metropolis night comes alive with a network of narrow, eerie blue lines of Cherenkov radiation.”

With those difficulties in mind, Niven asks another pertinent question: “Can human breed with kryptonian? Do we even use the same genetic code? On the face of it, LL could more easily breed with an ear of corn than with Kal-El.” Let’s face it, if it is biologically (not just physically) impossible, why go through all the trouble in the first place? But Niven allows the random workings of chance to come into play, here, because after all, life will out. What impediment could utterly separate evolutions pose in the face of that? 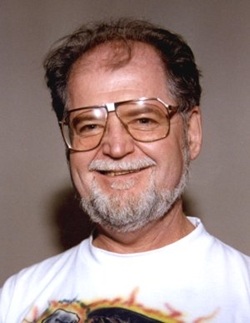 So, after a number of broad leaps of logic, and going through a laundry list of bad outcomes and the extreme measures that would be needed to prevent them, Niven finally finds a way for a bouncing baby Kryptonian/human-hybrid to gestate and enter the world. A happy ending, as it were, to a very difficult problem.

“Man of Steel, Woman of Kleenex” may be best described as an exercise in over-thinking a purely speculative line of reasoning, a letter to Penthouse gone horribly wrong, or an extraordinarily maladapted love story to a comic-book legend. Heck, it could even be described as “Larry Niven vs. Superman”. Whatever you wish to call it, it is laugh-out-loud funny. By all means, read it. But maybe not as a way to get in the mood.