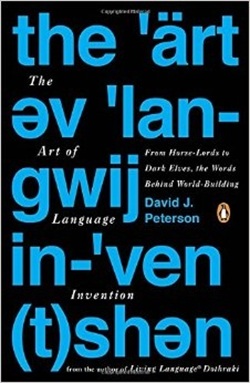 The Art of Language Invention

The Art of Language Invention by David J. Peterson is a short, information-packed guide to creating imaginary languages for fun and profit. Peterson is the linguist responsible for multiple alien languages for various television shows, not the least of which is Game of Thrones, with its Dothraki, High Valyrian and other derived languages. Peterson loves what he does, and has a fantastic time in breaking language down into its component parts. Unlike the little-too-cutsey humor of the neuroscientists we encountered in Do Zombies Dream of Undead Sheep, Peterson leaves any affectations at the door. But that does not prevent him from being very, very funny while trying to explain precise terminology to interested laymen: “Discussing allophony is really the first step toward understanding the systematicity of language. To explain it, let me take a fun topic like werewolves and ruin it by turning it into math” (58). And, as any reader will learn, he really dislikes onions.

Language invention, or conlanging as it is known among its practitioners, requires more than simply making up new words for common ones. That way lies Star Wars. And by that I mean Peterson almost immediately identifies something about Star Wars that has irked me for years: the examples of language there are complete gibberish, a random assortment of sounds with no meaningful relation to each other or to the subtitles. I was inordinately happy, nay, validated, to see Peterson’s criticism of the awkward alien dialogue bits in Return of the Jedi: “How on earth does Leia say the same thing twice and have it mean something different the second time?” (4). Lucas had a number of flaws, and lack of attention to linguistic details was a large one. As Peterson points out, there is always a certain percentage of fans who want to learn the language you have invented, and who will notice sloppy linguistics and let you know, loudly, that they know. 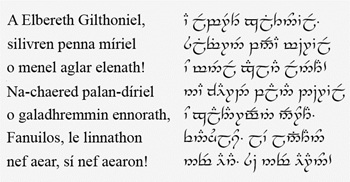 Now, I have also tried my hand at creating languages for my own unrealized epics. Has anyone who has read Tolkien not? There’s something very satisfying about his languages and alphabets that encourages imitation. I had taken it for granted that because Tolkien was a professor of languages, his languages would be good. But I had given no thought to how much work goes into making a language with any depth when it is not something that has evolved organically over thousands of years of interaction. So when Peterson brought up the minor detail that “Tolkien was a language creator before he penned his major works…He understood that language itself is inseparable from the culture that produces it” (10), I knew that this would be more than a simplified approach to conlanging—it would truly be about the art. I was not disappointed.

The Art of Language Invention uses an assortment of both actual and invented languages to demonstrate how that intersection of language and culture actually works. Peterson introduces the idea of language invention with real-world constructed languages—the historical Lingua Ignota and the more recent Esperanto and Volapük—and evaluates the reasons for their success or failure. He provides examples of how he developed certain invented languages—High Valyrian and Dothraki, in particular—based on a few words in the original text and influenced by existing natural languages. He discusses the difficulties in translating from the English-language scripts because of the different linguistic rules that had evolved in the conlangs. He diagrams a few sentences, conjugates a bunch of verbs, shows how parts of speech develop as the need to express certain concepts arises, and how pronunciations change. “English speakers have an unfair advantage when it comes to explaining sound changes since our gloriously appalling spelling system preserves, in many cases, an older state of the language” (163).

Through his lessons Peterson points out a surprising number of nuances and variations in natural language that we take for granted. And it’s not just the grammar and vocabulary—it’s the grammarization and cases, the affixes and inflections. If we stop to think about the elaborate construct that is a natural language, we would go down a deep and wonderful rabbit hole that would let us fall thousands of years into the past.

“Creating a language at any point is an attempt to take a slice out of an eras-long progression” (151). Linguistics and evolutionary biology often use similar terminology, because the mechanisms for both are comparable. New words are normally variations or adaptations of existing words and forms, not inventions from whole cloth. “Grammatical evolution is the most difficult, least described, and most exciting aspect of linguistic evolution…When it comes to historical linguistics and language modeling, this is the final frontier” (184).

The Art of Language Invention is a dense and passionate introduction to the architecture and mechanics of language. The book contains only four chapters: Sounds, Words, Evolution, and The Written Word. Each chapter is a distilled lesson in the basics of linguistics, with heady terminology and a case study to demonstrate. A collection of phrase books at the end feature common pleasantries (from ‘hello’ and ‘goodbye’ to ‘will you marry me?’) in Dothraki, High Valyrian, Shiväisith, and four other languages Peterson created. There is also a brief glossary of the linguistic terms used in the book.

Alas, The Art of Language Invention is too short to do more than whet the appetite of anyone who loves language in all its complicated and mysterious versions. It provides enough technical detail to give a rough familiarity with the subject, and offers extremely stripped-down examples of how the concepts work together to produce specific and nuanced meaning. As David Peterson makes clear, even invented languages are not just a bunch of words: “There are processes we have evidence of, and then there are processes that seem plausible, but for which we have no direct evidence. A conlang itself is an argument for its own plausibility” (197). They are living things that are at their best and most convincing when allowed to develop according to their own strengths and quirks. Kind of like their creators.