‘The Rats in the Walls”, published in Weird Tales in March, 1924, is one of H.P. Lovecraft’s essentially non-mythos tales (he injects a deity into the proceedings at nearly the last minute), a bit of grim narrative that manages its cosmic horrors without relying on the normal godly oppression. It is short and tightly written, yet still manages to appear deeper and more convoluted than it is due to some very well-placed classical name-dropping. Lovecraft’s racism is in full bloom, here, with frequent references to degenerate early races and an unfortunately named black cat who had to be renamed in subsequent reprints. But Lovecraft, for all his sins, is an inspiration to other artists. One of those is the legendary illustrator Richard Corben (Neverwhere), who was stirred to retell the story as Rat God, a five-issue series from Dark Horse Comics released in 2015 as a single volume. 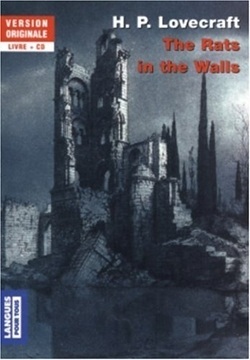 Rats in the Walls

Staid and traditional, “The Rats in the Walls” is a fine example of Lovecraft’s style. Lovecraft makes frequent mention of a different set of old gods than he is usually known for, referring to degenerate Roman cults devoted to Cybele, the mother goddess Magna Mater, and to her consort Atys (otherwise known as Attis), an ancient diety of resurrection and rebirth. Their combined worship entailed sacred castration and a priesthood of eunuchs. He attributes the cults to the Romanization of much older worship: “I deduced that Exham Priory stood on the site of a prehistoric temple; a Druidical or ante-Druidical thing which must have been contemporary with Stonehenge. That indescribable rites had been celebrated there, few doubted… there were unpleasant tales of the transference of these rites into the Cybele-worship which the Romans had introduced.” There is only a single late mention of Nylarthotep, but the spell of cosmic dread has been cast.

The description of the above-mentioned Exham Priory, the setting for “The Rats in the Walls”, reads like an inspiration for From Dusk ‘til Dawn’s evil brothel. It had “Gothic towers resting on a Saxon or Romanesque substructure, whose foundation in turn was of a still earlier order or blend of orders—Roman, and even Druidic or native Cymric, if legends speak truly. This foundation was a very singular thing, being merged on one side with the solid limestone of the precipice from whose brink the priory overlooked a desolate valley”. The architecture is fantastic, and physically allows the plunging descent into madness that will come.

Lovecraft’s fondness for cats is on full display here, with Mr. de la Poer bringing nine of them with him to the accursed priory. The cats are the only other creatures besides his tragic hero who can detect the phantom rats, “those fiend-born rats, always questing for new horrors”, that haunt the priory, and also the only creatures instinctively equipped to fight them, phantom or not.

“The Rats in the Walls” is also full of hints, none too subtle, of cannibalism. As he descends into the unknown, Mr. de la Poer finds carvings that describe “the most shocking ritual I have ever known; and told of the diet of the antediluvian cult which the priests of Cybele found and mingled with their own… but it was too much to see familiar English implements in such a place, and to read familiar English graffiti there, some as recent as 1610”. Eventually it becomes blatant (and the renamed cat becomes elevated to hero status) as de la Poer is repossessed by the ancestral madness: “they… found me crouching in the blackness over the plump, half-eaten body of Capt. Norrys, with my own cat leaping and tearing at my throat”. From the first hint of horror to the final grip of madness is a brief, unimpeded drop, simple and deeply effective. 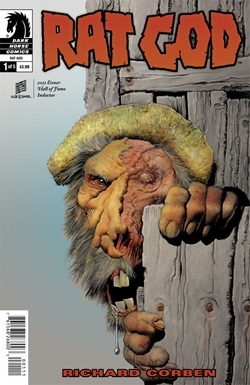 Rat God–a little different then Rats in the Walls

Rat God is a different creation. Where H.P. Lovecraft created a short, pointed, and frightening tale in “The Rats in the Walls”, the Richard Corben used the bones of it to construct his own fast-paced, inspired graphic version.

Both written and drawn by Corben, Rat God is a twisted and at times playful reimagining of Lovecraft’s original, streamlined tale. Corben uses some of the original iconography of the story while adding more overt and traditional Lovecraftian references as well as an overlay of Native American folklore. The heroic black cat of “Rats in the Walls” appears as a fortuitous black panther in Rat God.  The main character, one Clark Elwood, swears to Cthulhu and the Old Ones at frequent intervals. Corben models his protagonist after Lovecraft himself, making the young man a tall, gaunt, prissy academic, deeply bigoted and holding himself up as New England aristocracy. But he is still quick to start (and end) a fistfight with the local riff-raff.

In contrast to the haunted pile of the original, Corben sets his version in Lovecraft’s familiar Arkham and its Miskatonic University, and in a town of his own invention, Lame Dog. In typical horror-movie fashion, the town has cut itself off from outsiders, is ruled by an inbred family, harbors a weird, dangerous cult, and is full of warnings about not going into the cemetery. There is a pervasive mood of good-natured teasing  as the reconfigured plot winds its way through and around its source material. 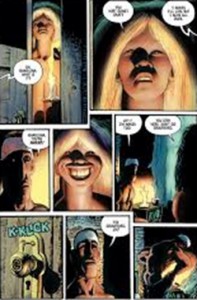 Corben sprinkles in his usual flashes of jokey humor, some of it verging on slapstick. While hardly the norm for a Lovecraftian tale, it is natural to something from Corben. He infuses sex, miscegenation, mutant rats, and deus ex machina walking corpses into Lovecraft’s classic mix of persistent ancient religion, human sacrifice, and decayed family lines. The result is that Corben’s story is livelier, with plenty of highly stylized nudity and highly imaginative ritual. The panels are full of thick black lines and strong, earthy colours. The overall effect of Corben’s style is one of sweaty physicality, a solid, stolid meatiness where Lovecraft favours suggestion. It brings a far more carnal resolution that Lovecraft would have ever entertained.

It is still unmistakably an affectionate homage.

Lovecraft’s themes and tropes have long provided fuel for other authors’ work. He encouraged it, after all. The essential elements of “The Rats in the Walls” are recognizable in Rat God, as much as the stories go their different ways with them. Corben’s tale has a vibrancy, an irrepressible energy, that much Lovecraftian-styled fiction avoids. Reading the two works back-to-back, though, it is impossible to miss the dark, measured energy of the original story. That, I think, is what inspires our affection for the old master, and keeps so many of us writing in his image.