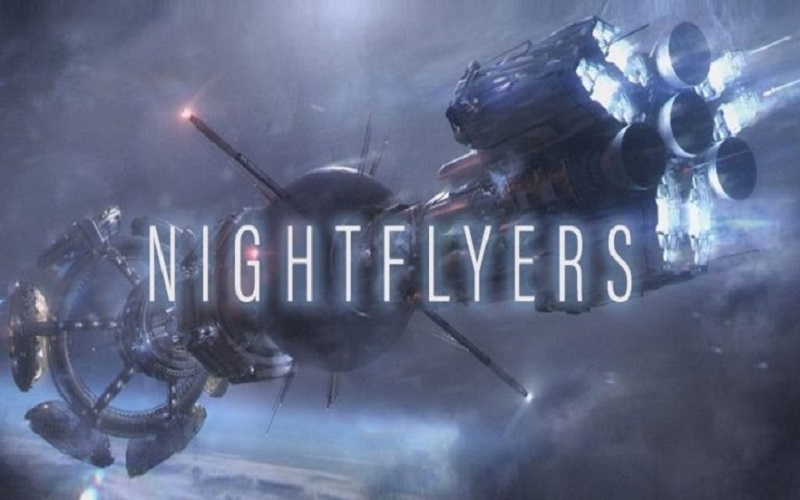 Nightflyers is a beautiful and ambitious ten episode series currently unfolding on SyFy. Unfortunately, while the show is visually striking it is extremely derivative, without the focus or attention to detail to be a proper pastiche.

The titular ship looks like a blend of inspirations from Alien, Event Horizon, and Silent Running. Various flourishes from Don’t Look Now, The Amityville Horror, The Haunting, and Psycho are also pressed into service. It does not entirely gel.

Plotwise, we are confronted from the beginning with a plague, quarantines, overpopulation, genetic engineering, body modifications, murderous telepaths, first contact, memory recordings and memory wipes. Nightflyers is stuffed to the gills with details meant as world-building, but they lack the context and connections that would make them work. Instead, we end up with a fairly standard horror movie drifting serenely through outer space.

Based on George R.R. Martin’s novella (which I haven’t read, so I cannot make a comparison), the series is unsatisfying. Set in 2093, Nightflyers takes place aboard a colony ship whose captain has agreed to bring a scientific crew into an area of space known as the Void with the hope of making first contact with an alien species. Things, predictably, go wrong.

The science fiction aspects of Nightflyers are frustratingly mushy. Genetically engineered for space seems to mean stunningly attractive, grossly self-absorbed, and able to withstand high doses of radiation for up to four minutes. Cutting edge psychology appears to be cutting out any unwanted memories and everything attached to them. Memory recordings are a thing, even if you don’t want the memories erased. Computers appear to be just this side of magic. Which would all be excusable, if the characters were compelling.

Three of the actors in this ensemble manage to breathe life into their rote characters. Maya Eshet brings a convincing vulnerability and wariness to her portrayal of the cyber-enhanced Lommie which made me want to follow her every twitch. Angus Sampson’s Rowan, the xenobiologist, resembles a heavier Tim Curry and comes across as both charmingly irreverent and deeply committed to the mission. And Sam Strike’s performance as the tortured telepath, Thale, conveys depth and layers to the character that the thin writing does not.

However, not all the characters fare as well. Eoin Macken plays Karl D’Branin, a scientist with an overstuffed backstory now leading a team toward possible first contact. I think he is supposed to be driven, but he comes off as kind of a jerk. As Dr. Agatha Matheson, Gretchen Mol spends entirely too much time asking everyone around her to just trust Thale. Agatha, conveniently, both the overinvolved psychologist responsible for keeping the dangerous telepath in check as well as Karl’s ex lover.

Rounding out the main cast, Jodie Turner-Smith’s Melantha is manipulative and arrogant and without any explicit purpose on the mission, David Ajala’s Captain Roy Eris is intense yet clumsily motivated, and Brian O’Byrne’s Chief Engineer Auggie is written in a way that makes his role in the storyline obvious.

There is no sense of a chance of getting to know these characters. They exist to get the plot from beginning to end, with a few not-terribly-surprising twists along the way.

In the end, Nightflyers is no worse than many other science fiction shows. But its unmitigated seriousness wears thin very quickly. Characters and story this self-important belong in a sweeping epic, not in derivative space-horror.

My opinion of Nightflyers is based on the five episodes released over the course of last week. I will more than likely watch the second five, as well, if only for completeness’s sake. I don’t actually dislike the show. Aspects of it are quite good. I simply don’t find enough there to grow attached to.