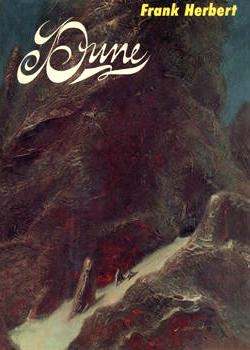 It is hard to believe it has been fifty years since Frank Herbert’s Hugo and Nebula award-winning Dune was published in August, 1965. The novel, and its titular planet, are still as vast and imposing as when they were new. Dune is probably one of the first novels named when someone speaks of “classic science fiction.” It is space opera at its finest, a grand sweep of empire and conquest set on a planet so forbidding that its desert-dwelling Fremen inhabitants have developed near-instantaneous blood clotting to preserve the moisture needed to survive there.

A summary of Dune’s plot would do it no justice—Herbert’s epic is best experienced as he wrote it. I will just examine a few of what I think are Dune’s more interesting components.

Herbert’s Dune is often what comes to mind when we speak of fictional world-building. Herbert dug into terrestrial ecology and human history and extrapolated believably from what he found. Through this permutation, the universe Dune inhabits is at once alien, half-recognized, and strangely familiar both physically and culturally.

The planet Arrakis, inspired by the ecology of the Oregon Dunes, is a harsh and dangerous world: “Those storms build up across six or seven thousand kilometers of flatlands, feed on anything that can give them a push—coriolis force, other storms, anything that has an ounce of energy in it…They can eat flesh off bones and etch the bones to slivers” (28). But Herbert goes beyond the impressive drama of sandstorms and his famous worms, into the quietly important Arrakian ecosystem of bats, birds, desert mice, and poverty plants that can anchor the shifting sand. The indigenous Fremen dream of making Arrakis a gentler place, given time, faith, and carefully guarded alterations to the fragile ecology: “And what is it you do to the face of Arrakis that must not be seen? We change it…slowly but with certainty…to make it fit for human life. Our generation will not see it, nor our children nor our children’s children nor the grandchildren of their children…but it will come” (283).

The language and culture of Dune’s Empire, its Great Houses, and in particular the Fremen of Arrakis, are culled from clearly identifiable human societies, and in many instances are only slightly modified. Herbert employs repurposed Judeo-Christian terminology for Dune’s dominant religious culture (the Orange Catholic Bible, the Bene Gesserit, Reverend Mothers and sisters) and, making extensive use of Earth’s desert cultures, adapts many Arabic words and concepts to create the Fremen way of life. Jihad retains its earthly meaning and function on dry Arrakis, while Shari-a, Mu zein, Wallah and Ichwan Bedwine persist with only slight variation (the Dune Wiki is a great resource for looking up the origins of some of Herbert’s wide-ranging terminology). Herbert also hints at the Fremen connection to modern Earth, and of their long history as nomads: “the Fremen culture was far older than she had suspected…There had been Fremen on Poritrin, she saw, a people grown soft with an easy planet, fair game for Imperial raiders to harvest and plant human colonies on Bela Tegeuse and Salusa Secundus” (348).

Although set in the far future, Dune seems to reach back to the middle ages for its byzantine politics and feudal social structure. Despite their planet-wide holdings, atomic weaponry, and space faring technology, the Great Houses of Dune’s Empire form a typical monarchy—interrelated noble families in a state of constantly shifting alliances, each jockeying for power. The Great Houses also all share a certain medieval barbarism. They hold entire planetary populations in servitude. They keep their concubines and wage their ritual vendettas. They engage in coliseum-style combat for sport, and poison their enemies as the opportunity arises. Royal tasters are replaced by poison snoopers, but the game is the same.

Dune’s structure relies on the solid foundation of political maneuvering and economic drivers to create a believable, indeed all too familiar, far-future society. Trade, costs, and control of resources are all mentioned casually and frequently. Of a room built to hold a rain forest on desert Arrakis, it is simply said, “This had been the government mansion in the days of the Old Empire. Costs had been of less importance then” (48). Economies have shifted. Ruling families have changed. The greatest sense of Dune’s political universe is gathered through details of the vendetta between the Great Houses of Harkonnen and Atreides. The personal plays out beside the commercial in their battle to control Arrakis and its invaluable product, spice.

Religion is also hugely important in Dune. It is a tool of the powerful, and the solace of the oppressed. The House Harkonnen dismisses faith’s wilder forms out of hand as a convenient distraction to control the local population: “They’ve a new prophet or religious leader of some kind among the Fremen…let them have their religion. It’ll keep them occupied” (358).

While certain Houses may be cynical about faith, on the whole Dune treats religion as an important practical component of the world. Where Walter Miller used religious faith as a transcendent human quality in A Canticle for Leibowitz, Herbert uses it in Dune as a political tool. The religious figures in Dune are not the pure idealists of Canticle. They are the prime, if often hidden, movers of their society, but not its moral center. They work toward their own secret goals. Herbert is very clear that everyone in Dune has an agenda. All his characters want something, and are actively, often aggressively, maneuvering to get it.

The Bene Gesserits, an all-female mystic order, are particularly adept at using religious faith to control the course of events large and small. They have done so for centuries: “Jessica thought about the prophecy—the Shari-a and all the panoplia propheticus, a Bene Gesserit of the Missionaria Protectiva dropped here long centuries ago—long dead, no doubt, but her purpose accomplished: the protective legends implanted in these people against the day of a Bene Gesserit’s need” (54). While the sisters quote fluently from the Orange Catholic Bible, their adherence to it seems less a matter of enduring belief in the divine than of long-term social engineering. Every action, every suggestion, builds to the final goal.

And the goal of the Bene Gesserit sisters is to produce the Kwisatz Haderach—the planned, prophesied male Bene Gesserit—through selective inbreeding among the Great Houses. The long success of their machinations, and their ultimate loss of control because of that success, are the root of Dune’s story: “You cannot avoid the interplay of politics with an orthodox religion…the leaders of such a community must invariably face that ultimate internal question: to succumb to complete opportunism as the price of maintaining their rule, or risk sacrificing themselves for the sake of the orthodox ethic?” (390).

Dune is epic, fully realized and powerful in its richness. The many, many characters are larger-than-life, with sweeping powers and ravenous appetites that drive them. They move Dune’s grand intrigues and fight its planetary guerrilla wars. But they are still believable. They are flawed, they are hurt, and they hurt in return. Because Dune draws so deeply from human history, the characters are, for all their strangeness, still us.

And that is how you build a world.