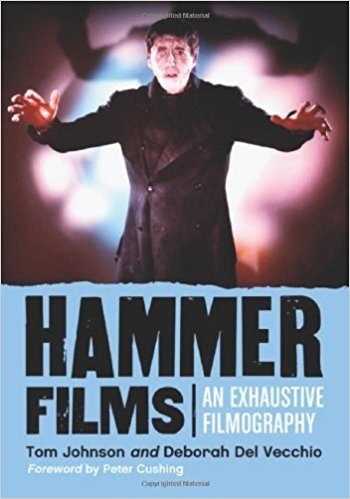 Hammer Films: An Exhaustive Filmography by Tom Johnson and Deborah Del Vecchio delivers what it promises. First published in 1996, this compendium details every film put out by Hammer studios–165 full length films over forty three years, as well as shorts and television shows. While there are a slew of related titles out there, Hammer Films: An Exhaustive Filmography stands out. The writing is workmanlike and occasionally repetitive as the authors strive to provide a thorough description of each film. But this is a labor of love, honest and earnest and more fun for it.

The House that Hammer Films Built

Following a foreword by the late, great Peter Cushing, and a brief overview of the studio’s history, the authors delve into the real story of Hammer Films. Hammer began turning out movies in 1935, and, except for a pause for World War II, did not stop until the studio folded in 1978. Over the decades they made comedies, dramas, war dramas, and thrillers. But in the fifties and sixties Hammer decided to focus its energies on monsters, space creatures, and supernatural threats to the point where, to this day, Hammer is synonymous with horror.

Hammer is probably best known for reviving the Universal monsters–Dracula, Frankenstein, the Mummy, and the Wolfman–and turning Christopher Lee and Peter Cushing into international stars. These films cemented the studio’s reputation for solid, well-made horror–which, unfortunately, Hammer took too far. Hammer also churned out an interminable number of questionable sequels to their blockbuster monster movies, losing quality and audience interest.

Along with its horror mainstays, Hammer produced a number of iconic entries in the science fiction field. The Quartermass Xperiment, X–The Unknown, and Five Million Years to Earth all stand as classics of fifties alien-invasion movies. Hammer also branched out with a few monsters of their own invention, like The Gorgon, and  Doctor Jekyll and Sister Hyde. They dabbled in the occult with chillers like The Devil Rides Out, and To the Devil…a Daughter. And they went for jungle adventure and stop motion dinosaurs with She, and One Million Years BC (which is legendary for Raquel Welch’s fur bikini, not the special effects).

The Devil is in the Details

The authors present the films in chronological order, and include any posters, stills, or promotional shots they could get. Each entry contains the release date, length, filming location, producer, director, screenplay author, editor, photography director, and U.K. certificate rating, cast list, any other titles the film may have been released under, and a complete synopsis of the plot. Additional details and anecdotes are sprinkled in, such as the career arc of an actor, quirks with sets or props, or what the country’s mood was when a film was released. The authors also note how well a film was received, and where it fit in Hammer’s general business plan. Although the entries are formulaic, taken as a whole they provide a fascinating glimpse into both the personal and business workings of Hammer studios.

The good, the bad, the groundbreaking, and the ill-conceived are all here, researched with a fan’s affection. There are far slicker, more polished books on Hammer out there, but Hammer Films: An Exhaustive Filmography has so much affection for its subject it should be a staple of any collection. I understand the fondness; Hammer films are what I think of when I hear “old-school horror”, and I’m not alone in that.

So keep your Freddy, Chucky, and Jason. I’ll take The Horror of Dracula any time.