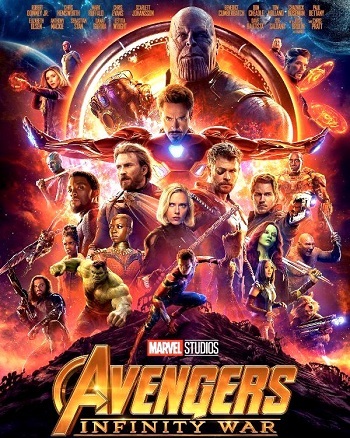 Let’s face it: Avengers: Infinity War does not need a review. It’s been out for over a week, the fans (and the box office numbers) have spoken, and anyone who has yet to see this juggernaut should already have a pretty good idea of what to expect. So instead I present a few observations for your reading pleasure.

Disclaimer: I have no investment in canon. I’m not much of comic reader and I have only seen about half of the Marvel Comics Universe movies out there. My concern about Avengers:Infinity War is only that it be internally consistent and consistent with the rest of the MCU.

Oh, and entertaining in a huge, summer-movie way.

And, of course, it is. Mostly.

As grand mash-ups go, Avengers:Infinity War keeps things moving. I appreciate how it begins in medias res by assuming the audience already knows who the players are and how they all connect, skipping a too-long recap of everyone’s backstory (I’m looking at you, Justice League). At two and a half hours, pausing for exposition would derail the momentum entirely. The action rarely stops, but the mayhem is interspersed with enough flashes of character development to keep it from being just a CGI slugfest.

Speaking of action, my favorite part of the brutal opening battle is Loki’s scathing curse, “You will never be a god”.

I also appreciate that Thanos is written as a character in his own right, rather than being just a huge computer-generated monster. Josh Brolin does a terrific job of showing the layers to Thanos’s monomania.

I think the Guardians of the Galaxy are poorly used in Avengers: Infinity War. Not wasted–they are too integral to the plot–but at key points they are reduced from fully developed characters into plot devices.

For instance, I think Gamora’s caving in is out of character. I understand her pain at seeing Nebula being tortured, but her weak attempt to run away when Thanos is about to sacrifice her seems–off. I didn’t buy the big reveal that Thanos loves her as strong enough to override her decision to die to keep the stone out of his grasp.

In a similar fashion, I didn’t buy Nebula simply standing by as Quill wrecks the attempt to take Thanos’s gauntlet away. Yes, she had a very hard day, but the Nebula we have seen up to this point is so laser-focused on taking down Thanos she should have smacked Quill into submission before he could screw things up.

And let’s face it, it’s obvious that the heroes killed in Avengers: Infinity War will be back, since we know the sequel schedule. So while there is some shock value to seeing the good guys die and Thanos getting to watch his sunset, the ending leaves far less of an impact than it promised.

I just have to assume that Doctor Strange decided to turn over the time stone to get to the one of the 14 million possible futures where everything turns out all right.

Why was the Hulk even here? Mark Ruffalo had to have had nothing better to do.

Thor and Rocket are a remarkably good pairing. I would totally watch a spin-off about them.

In the second installment of Avengers: Infinity War, Nebula deserves the kill shot. She has more than earned it.

This plotline may be the last best hope to bring Marvel Zombies to the big screen. Who’s with me?

Agree? Disagree? Think I missed the point entirely? Let me know in the comments.