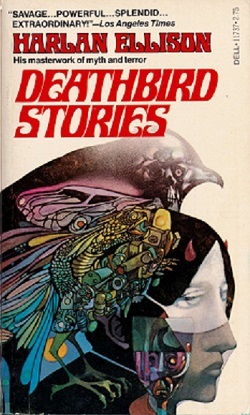 Harlan Ellison died last week at the age of 84. He was a genuine legend in science fiction, by all accounts larger than life and twice as abrasive. I never met the man, but he has still been a part of my life for decades.

When I was around eleven years old I found a paperback copy of Again, Dangerous Visions stuck on the basement shelf where unwanted paperbacks ended up. It was the sequel to his transgressive 1967 anthology–and it was enough to suck me in and show me how sharp science fiction could be. Later, I read the man himself–the glorious I Have No Mouth and I Must Scream, and Deathbird Stories.  I watched the supremely 70’s film version of A Boy and His Dog on VHS. I learned the empowering mantra “Pay the writer”.

Over the course of his long career Ellison published more than 1700 works, ranging from short stories to screenplays to essays, from comic books to literary criticisms. He was recognized with multiple Hugo, Nebula, and Edgar awards for works that changed the face of science fiction on page and on screen. He earned the World Fantasy Lifetime Achievement Award and the Horror Writers Association Lifetime Achievement Award, was named Grand Master by the Science Fiction Writers Association and by the World Horror Convention, and was inducted into the Science Fiction Hall of Fame.

But none of that matters if you don’t read him.

Unfortunately, it often takes the passing of a major author to inspire people to discover, or rediscover, their work. So it is with Harlan Ellison. Even though he continued to write prolifically, his heyday was the sixties and seventies when he was at the forefront of New Wave science fiction with his dangerous anthologies and subversive short stories.

These are a few of his works that I consider essential: 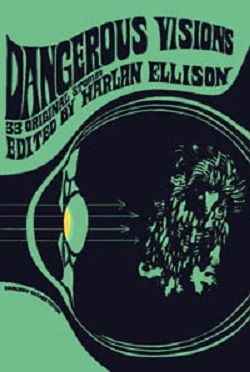 Stories
“A Boy and His Dog”
“I Have No Mouth, and I Must Scream”
“”Repent, Harlequin!” Said the Ticktockman”
“Shattered Like a Glass Goblin”
“The Whimper of Whipped Dogs”
“Soft Monkey”
“Jeffty Is Five”

I Have No Mouth, and I Must Scream
The Beast that Shouted Love at the Heart of the World
Deathbird Stories
Shatterday
Angry Candy
The Essential Ellison: a 50-Year Retrospective Revised & Expanded

There’s plenty to say of Harlan Ellison as a person, good and bad–and it’s all out there for the googling. But as I mentioned earlier, I never had the opportunity to meet him. I had only his vast body of work to judge him by. And by those lights, he was a star.