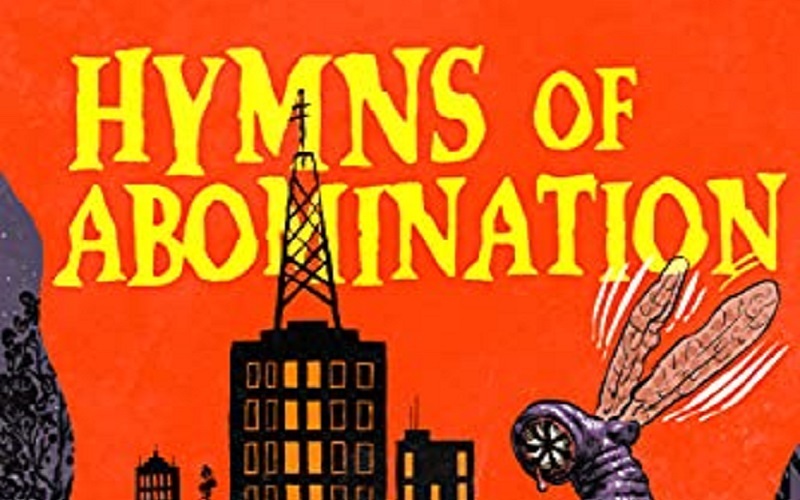 Hymns of Abomination: Secret Songs of Leeds is another solid anthology from Silent Motorist Media and editor Justin Burnett. As a loving tribute to the work of Matthew Bartlett, it’s outstanding. Inside are twenty-three wonderfully uncomfortable stories, thickly interspersed with disturbing selections from Anne Gare’s Rare and Import Video Catalogue (courtesy of Jonathan Raab).

I can’t easily summarize most of these stories. They are dreamy and disjointed, tangled up in myriad grotesque versions of Bartlett’s town of Leeds and its denizens. I’m not going to try to pick favorites here–I will only say that each story is fascinating in its own peculiar way.

There is a lot of vivid imagery and emotion to process in Hymns of Abomination, some of it more… manageable than the rest. 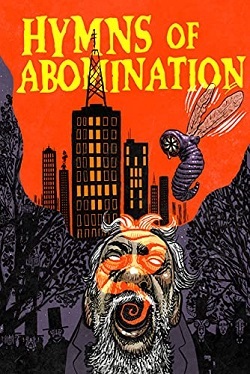 I feel that these stories have a reasonably traditional narrative flow, giving their various horrors at least the gloss of familiarity: The surreal “Northampton’s Favorite Son” by Yves Tourigny (who also provides the wonderfully menacing illustrations throughout); the folk-horror inflected “On Hunger Hills” by John Linwood Grant; the endless loop of “Leaving Leezds” by Brian Evenson; the finely detailed “Uncle Bart’s Map” by John Langan; the focused madness of “I Could Tell You So Much” by S.P. Miskowski; the old witchcraft of “Stump-Water” by Christine Morgan; the strangely positive “There Will Always Be Men Like Johnny” by Hailey Piper; the old-time religion of “Station Maintenance” by Pete Rawlik; and the progressive decay of “Dead in September” by Farah Rose Smith.

The others are more amorphous, with vignettes, moods, incidents, musings and anecdotes that veer off into the wild unknown: the emotionally complicated “Suddenly My House Became a Tree of Sores” by Gemma Files; the multiverse of “The Beat of Wings” by Betty Rocksteady; the unresolved “The House of Lost Sisters” by L.C. Von Hessen; the unreliably-narrated “The WXXT Podcast, Episode 23: Leeds Regional High School” by Tom Breen; an hallucinatory coming of age in “All Your Fathers Here and Gone” by K.H. Vaughan; a writer’s obsession in “Open Call” by Aksel Dadswell; the transgressive “Puppy Milk” by B.R. Yeager; the cults and secret knowledge in “A Delicate Spreading” by Scott R. Jones; the bones of an old house in “Missives from the House on Crabtree Lane” by Joanna Parypinski; a desert of predators in “Crawl of the West” by Cody Goodfellow; the grim snapshots of “Seven-Second Delay: In Which Terrible Things Happen to Tender Young Girls” by Jill Hand; business as usual in “Itemized Human Sacrifice, Q4” by Sean M. Thompson And Cheshire Trask; the dangerous spiritus loci of “What Am I?” by S.L. Edwards; and the everlasting punishment of “Father Ezekiel Shineface Sermon Hour” by Jon Padgett

In Hymns of Abomination: Secret Songs of Leeds, each contribution is a trip into an unnervingly matter-of-fact rendition of hell. The mostly-human characters spend their hours with all manner of goats, leeches, slugs, rot, and echoes of themselves and other monsters. Leeds is everywhere. No one is safe.

I loved it. I’m certain you will, too.