Lurker in the Lobby: A Guide to the Cinema of H.P. Lovecraft is an older but still handy guide to the many attempts made at filming Lovecraft’s cosmically weird tales. Authors Andrew Migliore and John Strysik bring a fan’s enthusiasm to the project, producing an often unpolished but still joyful compendium of Lovecraftian media. They approach their subject from several different angles, and end up giving quite a rich experience to their readers. 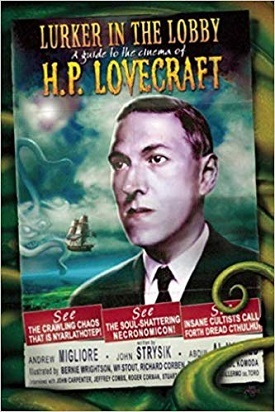 Since Lurker in the Lobby dates from 2006, it serves primarily as an historical reference. But what a history! The authors cover all the major films to that point, from Quartermass to The Thing to Dagon, with many familiar and lesser-known movies in between.

And when seen through the right lens, Lovecraftian elements show up in many places you wouldn’t normally think to look. Unexpected additions to the movie list include The Trollenberg Terror (1958) with its giant crawling eyes, Uzumaki (2000), based on a horror manga, and The Maze (1953), about the classically subversive threat of hereditary evil.

The television show list is also surprising, with Lovecraftian themes and references showing up not just in the usual horror anthology series but in the Saturday morning cartoons, as well.

But while the capsule reviews of the movies and TV shows are great fun, the interviews end up slowing the book down. Guillermo del Toro, John Carpenter, Roger Corman, Jeffrey Coombs, and Bernie Wrightson are among the luminaries the Lurker spoke with, and their interest in Lovecraft and filmmaking is inspiring. But the overall tone of the interviews is uneven. The questions are fairly formulaic and not particularly probing. They end abruptly. And while many of the interviewees have long had an active interest in the source material, others are included only by the chance of having worked on an adaptation.

To round out their offerings, the authors include a picture gallery featuring art by Richard Corben, Mike Migliore, and Bernie Wrightson, a pretty thorough list of short Lovecraft adaptations, and an index of feature films listed by year and again by the story that provided the basis for them.

So while it is imperfect and rough around the edges, Lurker in the Lobby is still an essential read. It is an affectionate look at some of the many, many films and filmmakers inspired by Lovecraft, presented in a way that can only inspire more.