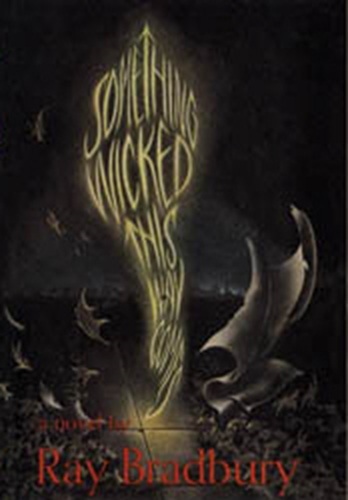 Bradbury’s Something Wicked This Way Comes

Ray Bradbury’s iconic October novel, Something Wicked This Way Comes, taps into the sadness and longing that lurks behind what frightens us. The roots of Bradbury’s novel lie in time’s inevitable passing, and the wanting of what we imagine is lost or out of reach. Boys long to become men and men to recapture their youth. They mourn the loss of what they have loved, and wish they could avoid those losses. While it is fine and natural to dream of such things, it is monstrous to try to alter the course of time to attain them. Some will always try, though. Something Wicked This Way Comes concerns itself with the trying, and the results.

Something Wicked This Way Comes’s story line is a simple thing. A mysterious carnival arrives in a small town at the end of October, and two boys, Will and Jim, with the help of Will’s father, resist temptation and destroy the threat. Even without the plot twists used to flesh out many novels Something Wicked This Way Comes is constantly in motion due to Bradbury’s liquid style. In many ways, Bradbury conjures the effect of stream of consciousness in his narrative, blending his characters’ thoughts with his own fluid expository prose: “So there they go, Jim running slower to stay with Will, Will running faster to stay with Jim, Jim breaking two windows in a haunted house because Will’s along, Will breaking one window instead of none, because Jim’s watching. God, how we get our fingers in each other’s clay. That’s friendship, each playing the potter to see what shapes we can make of the other” (20).

Bradbury identifies a sense of nostalgia that can be felt for the present as much as for the past. His characters know the world will change, that they will change, that goodbyes will be said and some may be permanent. Because of this, even though Something Wicked This Way Comes  begins with its protagonists Will and Jim at a point of transition, “Both touched toward fourteen; it almost trembled in their hands. And that was the October week when they grew up overnight, and were never so young any more…” (4), they are still learning all these lessons, and so are not the novel’s true heart. That role is filled by Will’s father, Charles Halloway.

Charles Halloway’s experiences of having reached middle age, of having married late and become a father late, all reflect the recurring themes of regret and hope, nostalgia and immediacy. When he muses, “How men envy and often hate these warm clocks, these wives, who know they will live forever…We men turn terribly mean, because we can’t hold onto the world or ourselves or anything. We are blind to continuity, all breaks down, falls, melts, stops, rots, or runs away” (63), he names and owns the vulnerabilities Bradbury’s carnival of  “autumn people” exploit.

“For some, autumn comes early, stays through life where October follows September and November touches October and then instead of December and Christ’s birth there is no Bethlehem Star, no rejoicing, but September comes again and old October and so on down the years, with no winter, spring, or revivifying summer…Such are the autumn people. Beware of them” (204)

Cooger & Dark and their carnival of freaks and outcasts play on nostalgia and manipulate the fear of change and loss. They are autumn people, always on the edge of dying. They are used up, worn out, ready to fade away. But they can’t. They won’t. They exist to hold on to their scrap of life, even if they can never enjoy it. Their existence is “perhaps only one of a running series of attempts to foster, encourage, preserve life in what was really nothing but a mortuary junkpile, rustflakes and dying coals that no wind could blow alight again” (281)

The characters that fall prey to Something Wicked This Way Comes’s autumn people let their fears of change overtake them, and they end up far from where they thought the carnival magic would return them. They find that being made young again is not the same as being young. Being made older does not earn any wisdom. Courting a way to stop these changes pulls them out of time, sets them loose with no moorings and no way back. Even Mr. Cooger, full partner in the carnival, is not protected: “there was the pink shiny Halloween mask of a small pretty boy’s face, but almost as if holes were cut where the eyes of Mr. Cooger shone out, old, old, eyes as bright as sharp blue stars and the light from those stars taking a million years to get here” (90).

Jim knows the danger yet can’t help but feel the pull of what the carnival promises. Fatherless, he wants to be a man, already. Will knows the danger, too, yet can’t see past the immediate threat to their friendship: “Together?…You looking down at me, Jim, and what’d we talk about, me with my pockets full of kite-string and marbles and frog-eyes, and you with nice clean empty pockets and making fun, is that what we’d talk, and you able to run faster and ditch me—“ (133). Both are still too young to see the full implications of growing up too fast, of peeling off their boyhood before they have had time to grow into their older selves.

Charles Halloway, however, understands. His desires and experiences, earned by having lived all his days,  humanize the philosophical resolution to Something Wicked This Way Comes. Mortality only haunts us if we fear to die, and by extension if we fear to live because it can only bring us closer to the end. If we let that fear rule us, what is the point of being at all? “The father hesitated only a moment. He felt the vague pain in his chest. If I run, he thought, what will happen? Is Death important? No. Everything that happens before Death is what counts. And we’ve done fine tonight. Even Death can’t spoil it. So, there went the boys…and why not…follow?” (306). This, then, is Something Wicked This Way Comes’s escape from crushing nostalgia and what might have been—this full embrace of now, with all its risks and all its hope.