Here are more October chills—enough to fill all thirty-one days several times over. 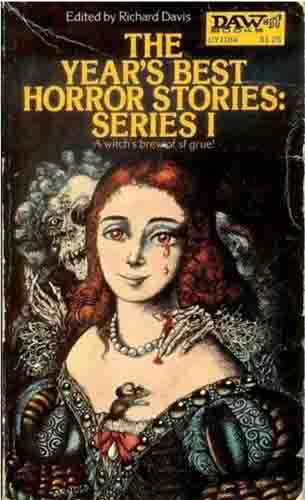 The Year’s Best Horror Stories was a twenty-two volume annual anthology series that ran from 1971 through 1994. Its creator, Richard Davis, edited the series from 1971-1973, with Christopher Lee himself writing the introduction to 1972’s Volume II. After a few years’ pause, Gerald W. Page revived the series in 1976 and edited it until 1979. Then, the inimitable Karl Edward Wagner took over, editing The Year’s Best Horror Stories from 1980 until his death in 1994. Since then, the series has been dormant.

The Year’s Best Horror Stories was an introduction to some of the most consistently dread-inducing authors I have ever encountered. Ramsey Campbell’s work appeared a remarkable 26 times in the 22 volumes, lending some support to my (and Mr. Wagner’s) opinion that he is one of the most frightening horror author working today. Other authors who appeared multiple times were Dennis Etchison (14 stories), Charles L. Grant (12 stories), Brian Lumley (11 stories), and Wayne Allen Sallee (10 stories). Other authors who appeared often in the series were David Drake, Harlan Ellison, Stephen King, Nina Kiriki Hoffman, Tanith Lee, David J. Schow, Robert Bloch, T.E.D. Klein, Manly Wade Wellman, Kim Newman, and Lisa Tuttle.

While there is considerable overlap of authors, only one entry in The Year’s Best Horror Stories was adapted for the previously-mentioned TV series Tales from the Darkside. That was “Slippage” (1982), by Michael P. Kube-McDowell, from volume XI, about a man whose life is slowly being erased.

More than four hundred stories appeared in the series. I recall many of them, if not always clearly. But there are a few that still stand out vividly for me (and some I read over and over for fresh thrills):

“Prey” (1969), by Richard Matheson, which also ended up in his anthology movie Trilogy of Terror, concerns a woman hunted through her apartment by doll possessed by an ancient Zuni warrior’s spirit.

“The Events at Poroth Farm” (1972), by T. E. D. Klein, an unsettling novella of love, possession, and death among the New Jersey Mennonites.

“The Whimper of Whipped Dogs” (1973), by Harlan Ellison, based on the infamous murder of Kitty Genovese, makes a monster of the city and the demands of an urban life.

“Something Had to Be Done” (1975), by David Drake is absolutely one of my favorites. In it, a terminally ill Army sergeant pays a notification visit to the family of a soldier who “died in battle”, in order to tie up some loose ends. Short, sharp, and scathing. 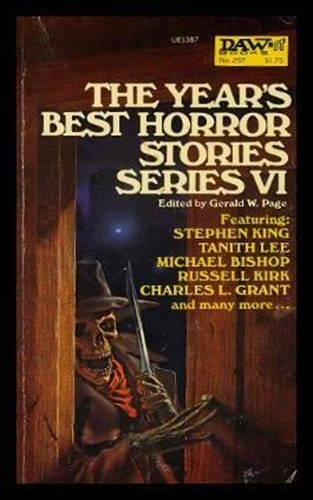 “At the Bottom of the Garden” (1975), by David Campton is a slightly loopy but ultimately tragic story of a woman, her daughter, and the creature that might make things right for them.

“The Horse Lord” (1977), by Lisa Tuttle, in which a family moves to a farmhouse in the country and an old, hungry god is resurrected by the children. The imagery was visceral. I refer to this story often as an example of staying power.

“Winter White” (1978), by Tanith Lee is a dark fantasy set in a barbarian kingdom. A warrior makes his own end with a magic pipe, a silent witch, and the invisible child he fathers on her.

“If Damon Comes” (1978), by Charles L. Grant, is one of his Oxrun Station stories. Grim, and, sad, and terrifying, a winter’s tale about a poor father haunted by his dead son.

“Within the Walls of Tyre” (1978), by Michael Bishop is an unconventional horror story about a woman’s private tragedy being commercially exploited by a man she thought she could trust. There are no monsters, only pain.

“Black Man with a Horn” (1980), by T.E.D. Klein, once more, is a Lovecraftian novella that takes the Cthulhu mythos very effectively to the modern day swamps of Florida.

“The Show Goes On” (1982), by Ramsey Campbell is set in an abandoned movie theater, and is superbly Campbell—disorienting, suggestive, decaying, and utterly frightening.

“Mrs. Halfbooger’s Basement” (1982), by Lawrence C. Connolly concerns an old woman, the living children who torment her, and the dead children who haunt her.

“Mrs. Todd’s Shortcut” (1984), by Stephen King is possibly my favorite King story. Mrs. Todd discovers a shortcut that takes her out of this world into one she likes much better.

“The Yougoslaves” (1986), by Robert Bloch, in which a pack of young gypsies meet their maker in the Paris sewers.

“Fruiting Bodies” (1988), by Brian Lumley details the end of a seaside town and its last inhabitant as they are slowly devoured by the sea on one side and dry rot from the other.

“Jerry’s Kids Meet Wormboy” (1989), by David J. Schow is a particularly vivid gore-fest about a survivor of the Zombie Apocalypse who eats the walking dead himself, and a small time televangelist whose faith is renewed by the zombies’ resurrection.

The tone of the anthologies changed over the years, as the style of horror itself became more graphic and early, traditional creepiness gave way to more explicit shocks. What remained consistent, though, was the ability of the selected stories to make you look behind you. I have pointed out the stories that still scare me, even after all this time. I’m sure there are plenty of unmentioned others in The Year’s Best Horror Stories that will have the same effect on you.