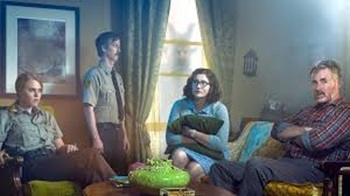 IFC’s Stan Against Evil is a slight and subversively funny show that is somehow, less than the sum of its parts. Stomping along in the wake of Ash vs Evil Dead’s success, Stan Against Evil is charmingly well-cast and cheerfully quirky, yet saddled with predictable plotting and a very thin mythology. But it still manages to throw some worthwhile curve-ball jokes into the mix, and it’s definitely worth a look.

The set-up is pretty simple. The small, rural town of Willard’s Mill, New Hampshire is cursed. It seems that back in 1693, the evil Constable Eccles burned 172 witches at the stake. Since then, every constable the town has ever had has died in office. Except one.

And that’s how we get our hero, Stanley Miller (played by the magnificently crusty John C. McGinley). He somehow survived long enough to resign his post after attacking a witch at his wife’s funeral.

Stan’s replacement is Evie (Janet Varney, veering wildly between competent and oblivious), a transplant from the city, divorced and with a daughter who functions more as a character trait than a character.

The small core cast rounds out with Leon (Nate Mooney) the Barney Fife-esque deputy who is friendly, loyal, and truly and deeply perverted, and Denise (Deborah Baker Jr.), Stan’s unlikely daughter played as a bizarre take on the manic pixie dream girl. 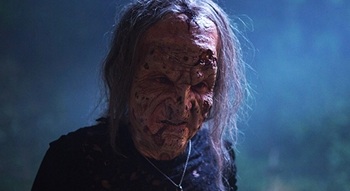 Are you a good witch, or a bad witch?

In many ways Stan Against Evil simply retools the basic premise of Ash with new characters and a new location, but it fails to aspire to anything more. It lacks (so far) a larger theme or a detectable sense of purpose. The characters generally just show up, kill some monsters, and go home in time for dinner. There is also a lack of skepticism from any of the characters that makes the show feel even more formulaic and one-note, since everyone is on the same page from the first ten minutes of episode one.

It’s hard to tell exactly when the show is set—the combination of flip phones, old cars, and references to Tinder make it hard to pin down, as do Stan’s perpetually 1970’s cultural reference points. There is also an unexpected Buffy library vibe, as our heroes must rely on hard copy books for the information they need to fight evil. The option of looking anything up online does not exist in this particular reality.

My impression is that Stan Against Evil plays more as a sketch comedy than as a series. The actors all inhabit their characters fully, and each is nicely fleshed out–but they don’t really mesh into a dynamic group. Over the course of eight episodes there is no character development, no learning curve, and no layers to be peeled back.

Contributing to the character stasis, this is very much a monster-of-the-week style of show, loaded with cheese-tastic special effects but with precious little continuity and even less common sense. The scripts are perfunctory and remarkably superficial, broadcasting their twists like a toddler with a secret. What you see is what you get, in half-hour increments.

But Stan Against Evil is still very funny. Created by comedian Dana Gould (The Simpsons), the show is full of background gags and oddball references that keep it lively. And McGinley as Stan delivers some of the best throw-away lines—when he goes off on something, the turns of phrase are remarkably, crudely, hilariously accurate.

All eight episodes are available on demand now from IFC, and despite its shortcomings I highly recommend binging it. Stan Against Evil is empty calories, but it is sharp enough, charming enough, and funny enough to make it worth the small investment of time.