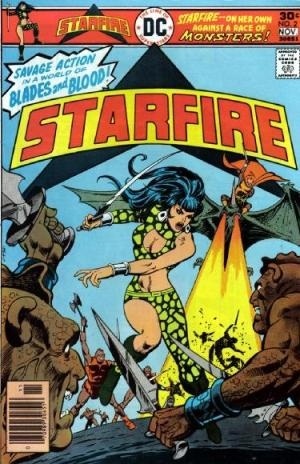 Starfire Issue # 2, doing what she does best

DC Comics’s 1976 version of Starfire may now be a blast from the past, but she is not one of your regrettable superheroes. In fact, she has had a richer and more varied career than would be expected from a run that only lasted eight issues and three costume changes.

For the record, DC is really fond of that name. The Starfire of which I speak is the second of three heroes to bear the name—the first being a male character who morphed into Red Star, and the third being the freewheeling Teen Titan otherwise known as Koriand’r.

Written originally by David Michelinie (who wrote prolifically for both DC and Marvel) and drawn by Mike Vosburg, this Starfire was introduced with her own title in August, 1976.

While essentially human and not possessed of specific superpowers, Starfire was still quite exotic. According to her bio, her mother had been “white”, and her father “yellow”, and Starfire herself is a blue-eyed, black-haired, pale-gold skinned beauty.  (Now, I’m going to speculate a little about her very specific parentage—she was introduced just after the US got out of Vietnam, and right about the time the impact of all the left-behind Amerasian children began to be felt and dealt with. Just my thoughts on the inspiration for her appearance.) Her fantastic looks were in fact the source of much male leering and pawing during her run–no matter what species the male. 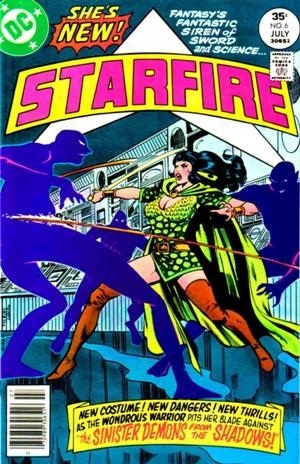 The set-up for Starfire’s story, in brief, is this: according to the DC Wiki, Starfire belongs to the New Earth universe (sort of). She was born on an unnamed planet ruled by factions that control both technology and magic and where humans have been enslaved by the alien Yorg and Mygorg races. Starfire was bred from slaves and raised from infancy as a pet by the Mygorg chief Sookaroth. Because of her incredible beauty, she was intended to become his “bride” upon reaching eighteen. Unfortunately for Sookaroth, just before that happened Starfire made her escape with a rogue human war-priest, Dagan. Dagan taught her to fight. Then, of course, they fell in love. Sookaroth naturally hunted them down, tortured and killed Dagan, and inspired Starfire—now a warrior with serious sword, archery, and hand-to-hand combat skills–to put together a rebel army to overthrow their slave-masters.

By the time her story unceremoniously ended, Starfire had advanced to using laser pistols, hovercraft, teleportation, and supercomputers as well as the usual medieval weapons and trappings in her fight for human freedom. Readers were left hanging at the end of issue # 8 with the promise of a new installment that never came.

So there was that disappointment. But even with an undefined place in the DC Universe and without a title to call her own, DC kept their second Starfire around. 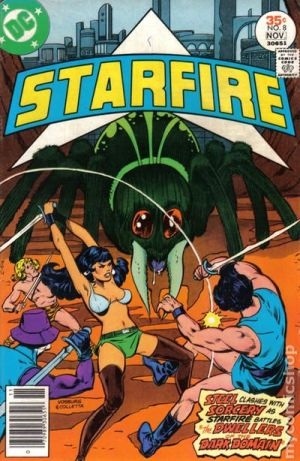 After her title’s demise, Starfire still showed up to lend an occasional hand to other superheroes. In 1978 she made an appearance in the also-short-lived Star Hunters (which, surprise, was also written by David Michelinie). In this adventure her planet is finally named as Pytharia, and Starfire is revealed to be one of the Champions of the Sornaii—a heroic aspect which Michelinie intended to connect her to Michael Moorcock’s Eternal Champion. Again, an interesting storyline was left unresolved when the title folded.

After a two decade hiatus, Starfire had a couple of fleeting mentions in Swamp Thing #163 in 1996 and Starman # 55 in 1999. Then she turned up again in 2010, ready for action, in several issues of Time Masters: Vanishing Point (created by Dan Jurgens and Norm Rapmund). There Starfire met and fought beside Booster Gold, Green Lantern, and Superman, among others, during an epic quest to find Batman—even though she technically should not have survived the Crisis on Infinite Earths, especially since she didn’t make it through the DC Implosion.

So while the Starfire comics are few and not worth very much in the collectors market, there is something about the character that has inspired multiple comic creators to keep bringing her back, if only for a name-check or a couple of panels. And we may yet see Starfire again. It’s hard to keep a good time-hopping, Crisis-surviving, possible Eternal Champion-being swordswoman down.

1 thought on “Starfire: DC’s Warrior Woman From Way Back”