I went into The Visit, the latest offering by writer/director M. Night Shyamalan’s, with high hopes and restrained expectations. I hadn’t seen anything of his since Signs and, based on widely-held critical opinions, had no reason to regret that. But there had been some good buzz about The Visit. Maybe Shyamalan had found his footing, again.

I think in some ways he has. The Visit is quite an effective little horror film about two children meeting their grandparents for the first time.  It was made for only 5 million dollars, and relies on nothing but finely-tuned acting and sharp camera work to make it scary. And it was—I jumped, I flinched, I gasped in shocked surprise. Is it derivative? Absolutely. Is it predictable? Frequently. Is it scary? Yes, indeed. While it has its flaws, The Visit is well-constructed and well-cast, with a minimum of gore and a number of solid scares leading up to the big finish. 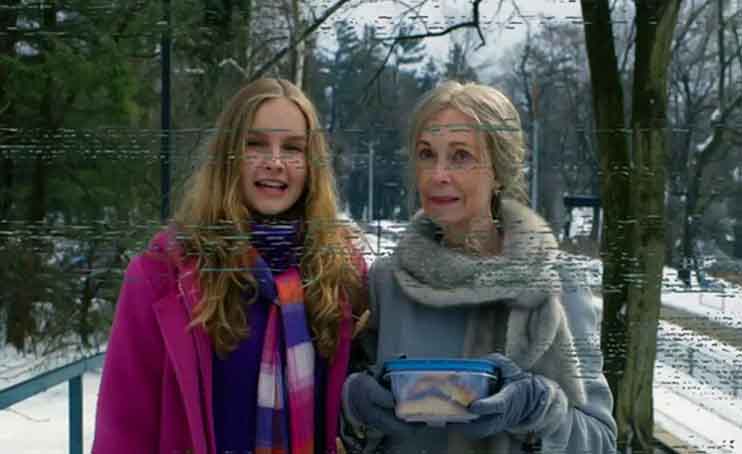 Visually, The Visit grabs the eye. Against the isolation of a rural winter and the drab costumes of Pop-pop and Nana, the children’s bright yellow, green, and pink clothing demands attention. It also allows the gradually-revealed threat to blend into the grey background until it is ready to spring.

Shyamalan sets up The Visit’s style immediately, by giving his adolescent female character a camera and the mission to make a documentary of a week with her never-met grandparents. Her project becomes the impetus for the storytelling and the device upon which Shyamalan hangs his cinematography. There is almost seamless editing between traditional filming and the hand-held/found footage effect, to the point that it is not always clear which is which. Certain scenes are strongly reminiscent of The Blair Witch Project and the similar films that followed. I think the technique is better realized, here, even though it loses any shock value it may have had.

The cast is talented. Olivia DeJonge and Ed Oxenbould as the protagonists Rebecca and Tyler have an easy chemistry that is almost too familiar for siblings of their ages (15 and 13, respectively). They are precocious and funny and comfortable in their roles, even when saddled with goofy quirks. As the children’s mother, Kathryn Hand invests her character with a youthful energy that speaks of an immature parent. She loves her kids, but the impression I got was that they parent her as much if not more than she parents them.

Deanna Dunagan as Nana brings an often believable portrayal of barely-checked madness to the film. She has a face like an aged china doll, making her lunatic turns all the more shocking. Peter McRobbie is less obviously insane as Pop-pop, and he inflects his character’s paranoia with the suggestion of a real desire for connection. At times he seems so lost it is difficult to not feel pity for him.

There were some false steps in the movie that bog it down. The children’s weaknesses are too precise and are exploited a little too plainly in the final showdown, taking away some of the impact. The final confrontation came across to me like a cheap thrill, an opportunity for an easy fright and a little gross-out. And I was left with a few random questions: Why do concerned neighbors stop by instead of calling? Why is there an internet connection fast enough for glitch-free Skyping, but no cell phone service or land line? Why did their mother not introduce the kids to their grandparents on Facebook? Why, knowing that their real grandparents have been replaced by progressively-more-unhinged strangers, would Rebecca ever go down in the basement? 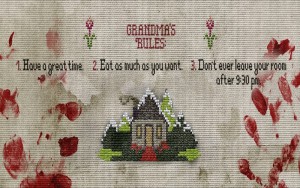 Questions aside, I think The Visit is a small, scary movie that dips regularly into the obvious. The climax of the film is still Shyamalan’s usual twist, and it is intense and heavy-handed compared to the wonderfully inflicted build up. Its final message of “Don’t hold on to anger” seems just a wee bit maudlin after what goes before it.

But it is still a pretty good movie. The Visit probably won’t turn out to be as enduring or fondly remembered as The Sixth Sense, but it is well worth seeing. It is funny, it is tense, it is frightening, and it somehow makes you care about all of its characters. Even the wrong ones. That’s the kind of twist it is hard to see coming.