In place of a much-discussed third X Files theatrical film, Fox decided to revive the show with a six episode miniseries that dives immediately back into the core alien abduction mythology. Chris Carter returns as executive producer and as one of the writers and directors of the new season. In addition to the irreplaceable Mulder (David Duchovny) and Scully (Gillian Anderson), the Season 10 miniseries brings back Skinner (Mitch Pileggi), The Smoking Man (William B. Davis), and Monica Reyes (Annabeth Gish).

The X Files are back

I didn’t watch much of The X Files in its original run from 1993 to 2002—I was more of a Buffy girl, back then. Nor did I watch either of the two big-screen X Files movies, or read the comics based on the show. However, such a cultural touchstone can’t really be ignored.

So I did watch The X Files intermittently online, when the mood would strike me. A couple of my favorites were the disgusting and legendary episode “Home” (S4;E2), about a severely inbred family who began keeping exclusively to themselves right after the Civil War, and the less legendary but still memorably creepy “Detour” (S5;E4), which uses the unlikely evolutionary adaptation of lost conquistadors to make its red-eyed monsters. These episodes gave me a certain fondness for Mulder, Scully, and their weird assignments, and gave me a rudimentary background in the show’s driving themes of alien invasion and shadow governments.

And now, The X Files is back and we all have another shot at believing that Mulder’s elusive truth really might be out there. This time, some of the ideas sound almost too familiar for comfort.

Episode 1 of the new mini-season, “My Struggle,” was written and directed by series creator Chris Carter and made its debut at New York ComicCon 2015.  With it, Carter again picked up the series’ mythology and brought it roaring back. There are UFOs in this episode, and lots of them. As Mulder tells us in the voice-over intro, “Only Roswell is remembered. But we must ask ourselves, are they really a hoax? Are we really alone? Or are we being lied to?” With that establishing idea, the episode proceeds to cut back and forth between a saucer crash in New Mexico in 1947 and the expanding paranoia of the present day. 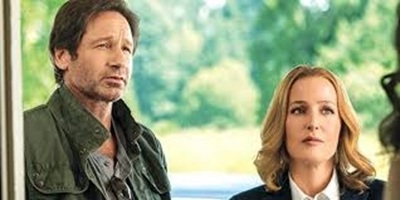 Mulder and Scully, together again

Fourteen years later, Gillian Anderson’s Scully is thinner, tired-looking, cool and still patrician. David Duchovny’s Mulder looks his age, weathered and ragged and drifting. But their chemistry is still there, a mutual concern made of expressions and glances more than any particular dialogue. It was good to see it.

To energize the familiar major characters from the original series, the new episode brings in Tad O’Malley (Joel McHale), a conspiracy theorist whose grand paranoia only serves to feed and magnify Mulder’s. Their pairing results in a huge, unifying conspiracy theory that incorporates the H-bomb as an unwitting beacon to UFOs, government cover-ups of alien technology, human experimentation resulting in human/alien hybrids, government created climate change, 911 false-flag accusations, and other, generalized anti-government conspiracies.

In addition to the modern conspiracy twists, the show digs deeply back into the classic iconography of alien abduction, with the added confounder that the X Files program itself was a lie to distract anyone from the truth. Mulder, who so wants to believe, is willing to believe that he and Scully were manipulated by the very program they devoted their energies to. The unifying theory only needs the “why” answered to prove it—and that quest will be plenty of fuel for a several-season-long fire.

The episode is very talky as it establishes itself after so long a hiatus. The exposition is heavy and somewhat melodramatic, rather than actually clumsy—it is technically well executed, but why, for example, is O’Malley explaining basic alien abduction information to Scully? And there is a dearth of action. What happens, happens in the last few minutes of the show in a burst of conspiratorial energy.

But Scully believes. Mulder believes. And the episode ends with Skinner calling them back in, because they are the only people prepared to face what is coming.

So, coming to the revival not as a die-hard fan but as a casual browser, I would have to say first episode of The X Files miniseries is intriguing and a welcome return. The writing is good, the cast is in its element, and the conspiracy theories are flying. I doubt six episodes are enough to cover all the possibilities suggested in the first one. But after this, I certainly wouldn’t say no to an eleventh season. Maybe it’s out there.