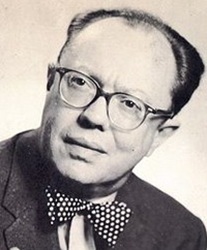 While I’m on the subject of Western horror…I mentioned Anthony Boucher’s “They Bite” in my review of Bone Tomahawk—not for the shared love of lopped off extremities or strange cannibal tribes or even the old tropes linked to the native dead and their burial grounds, but because of the real-world basis and enduring creepiness of each work’s monsters.

Have you ever read a story that gets under your skin, like a splinter you can’t remove? Some tales never lose their power to frighten, no matter how familiar they become. Anytime I have been challenged to name a prime example of a horror story, “They Bite” is first on my list. Published in Unknown in August, 1943, it was a weird Western before the genre truly existed, and it is never too far from my attention.

Boucher, who cut his teeth writing for Weird Tales, Unknown, and Astounding Science Fiction, often infused his stories with a light, humorous touch. But there is nothing funny about “They Bite.” It is a tightly told story of the look-over-your-shoulder variety, peopled with creatures that were men, once. He makes excellent use of repetition and suggestion to drive home the existence of his tenacious predators. 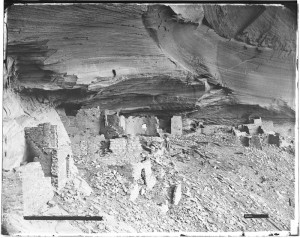 Set in the desert of California, “They Bite”’s Carkers lurk around the town of Oasis, hidden, hungry, snatching what they can. Boucher builds a legend up around them with a few cultural references and a few dangerously imprecise descripives: “something moved, something little and thin and brown as the earth. Too large for a rabbit, much too small for a man”, and, “something like a man and something like a lizard, and something like the things that flit across the corner of the eye”, and,“something very dry and thin and brown, only when you look around it isn’t there. Ever see it?”, and, “you glimpse lean, dry things out of the corner of your eye… take the Carkers and the things you don’t quite see and you put ’em together. And they bite.”

“They Bite” is sort of a cross between Treasure of the Sierra Madre and Night of the Living Dead. Hugh Tallant, the main character of the story, is not a good person. He is greedy and lazy, willing to kill in order to steal a prospector’s gold and happy to blame the murder on a local legend. The Carkers of the story come from a long line of bogeymen, both historical and imagined:

“Ever hear of Sawney Bean? …Or let’s be more modern—ever hear of the Benders? Kansas in the 1870s? No? Ever hear of Procrustes? Or Polyphemus? Or Fee-fi-fo-fum? There are ogres, you know. They’re no legend. They’re fact, they are…you’ll find ’em everywhere. All over Europe and pretty much in this country too before communications became what they are.” 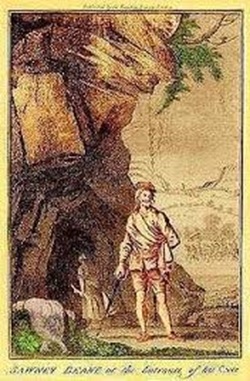 Sawney Bean—part of They Bite’s background

But they are not, strictly speaking, cannibals. They might have been only that, once, but they’ve changed under the desert sun: “Maybe they put together what the Indians knew and what they knew, and it worked. Maybe Whatever they made their sacrifices to understood them better out here than in Kansas”.

So it is that Tallant discovers not only are the legends true accounts, but that he badly misjudged his ability to get away with murder. Counting on fear of the Carker legend to cover his tracks, Tallant steps into his own trap: “he noticed the infinitesimal rise and fall of the chest. The Carker was not dead. It was sleeping”.

While the desert setting gives “They Bite” its weird Western flavor, the horror hinges on the relentless reminders of the danger of lean, dry things seen at the corner of the eye. The Carkers stand in the place between fact and superstition as Boucher weaves together the frontier fears of the unknown with native legends and documented human depravity. It is a beautifully-made story that will continue to creep around the edges of your awareness for a long time to come.