I’d like to pay a small tribute to three men whose work in movies meant something to me, each in his different way. Angus Scrimm, David Bowie, and Alan Rickman were wildly divergent in their talents and career paths, and each received wildly varying amounts of recognition and acclaim in life and in death. I’m not going to pretend to any sweeping career overviews or deep thematic analysis, or even that their talents were in any way comparable.  It’s not about art, or even objective quality. For me, this is about remembering how each of them played a certain role that made, and still makes, me happy. 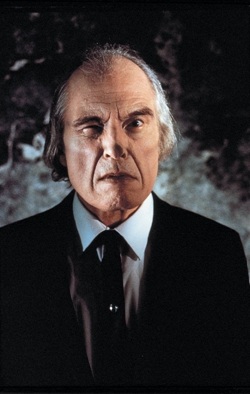 The first I want to recognize is Angus Scrimm, the one and only Tall Man, who helped make the Phantasm movies the cult horror classics they are. I wasn’t allowed to see Phantasm when it came out in 1979 because my mother eschewed the junk culture of cheap horror movies. When I finally did get to watch it a few years later (at a friend’s house, naturally), I was smitten by the sheer cheesy wonder of it. Scrimm, an unlikely monster with his creepy dwarves and silver spheres, was a large and lasting part of that, since I still bellow “Boy!” in imitation of him to this day. He has 51 acting credits   to his name, ranging from appearances in TV series (including Alias) to a slew of low-budget horror movies. His final portrayal of the Tall Man is in the soon-to-be-released Ravager: Phantasm V. 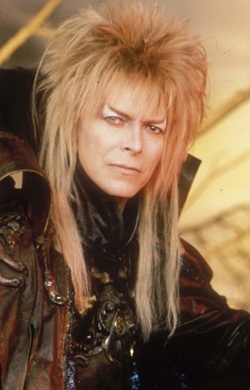 Next is the incomparable David Bowie, who in addition to his fantastic music and his musical persona Ziggy Stardust also appeared in a surprising number of films. He took many small roles such as Pontius Pilate in the controversial The Last Temptation of Christ, and as an ethereal Andy Warhol in the surreal biopic Basquiat. But Bowie is perhaps best known as an actor for his leading roles as an alien in the trippy, dated, and grotesque The Man Who Fell to Earth, a less-than-immortal vampire in The Hunger, and, of course, the flamboyant Jareth the Goblin King in Labyrinth, where the odd, catchy songs and odder, infamous costumes forever cemented his position in my young heart. I will always love him as this character, even though as an adult it makes me cringe a little. Okay, a lot. But, still. 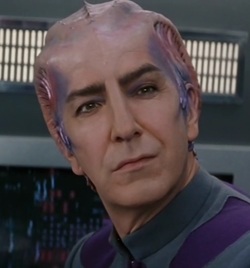 Last is Alan Rickman, who began his career on the stage before moving into movies. Among his consistently fine mainstream performances, he always sprinkled in a few genre roles where he seemed to enjoy himself immensely. He was the criminal mastermind Hans Gruber in Die Hard, Metatron, the Voice of God in Dogma, and the voice of Marvin the Paranoid Android in The Hitchhiker’s Guide to the Galaxy. But Rickman truly built his legacy over eight films as the inimitable, arrogant, nuanced Severus Snape in the Harry Potter series. Still, I am fondest of him as the perpetually disgusted former Shakespearean actor Alexander Dane in Galaxy Quest. Many of the characterizations he would later bring to Snape were fully developed in Dane—from the condescension to the sarcasm to the unexpected, matter-of-fact heroism. It looked less impressive without Snape’s all-black costume, but it certainly played the same.

The passing of a celebrity is a strange thing. They have an impact on our lives but we rarely really know them as rounded human beings, so their deaths come as a sudden, odd disruption rather than an intimate personal loss. It doesn’t mean we don’t mourn them. It doesn’t mean we aren’t sad and somewhat bereft at losing them. That’s where I am with Scrimm, Bowie, and Rickman. I didn’t know them, but I miss them just the same.

Despite their cluster and the much-referenced Rule of Three I know the deaths are random, and that many other celebrities have died in recent days. Having these three all die so close together, though, reminds me more of what is gone. Angus Scrimm, David Bowie, and Alan Rickman meant something to me in the context of science fiction, fantasy, and horror films. And for that I thank them, and am glad that I can still watch their peculiar magic time and time again, and bring them back for a little while.