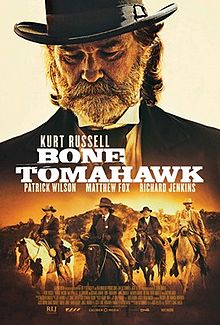 Bone Tomahawk is a compelling little Weird Western movie, lurking right on the edge of the genre with its combination of laconic cowboys and horrific natives. Written and directed by S. Craig Zahler, Bone Tomahawk premiered at Fantastic Fest in September, 2015 and went into limited theatrical release in October, 2015. While it has a familiar quality to it, the story is freshly told and effectively, creepily presented.

For a movie that opens with a throat slitting, a scalping, and an accidently desecrated burial ground, it is almost immediately engaging in a warm way. The oddly literary dialogue is delivered with a western ruffian twang and a sly humor that is unexpected but right. There is a bar named The Learned Goat. There are lines like, “You ask about horses again I’ll slap you red,” and “Sorry for yelling at you.” “My wife used to call me a dumb imbecile all the time. Felt kinda nice.”

The script is a treat. While Bone Tomahawk echoes some of the drawling stateliness of Unforgiven in its pacing, it is not nearly as contemplative and ambles along with jokes and a quicker step. There is precious little music in the film, save for two scenes. The noises of the men and the wind and the moving brush fill the spaces around their chatter. The dialogue follows its own path, separate from the action–witty, bantering, with sarcastic humor running through almost every exchange. The teasing and familiarity effectively conveys the unavoidable intimacy of a tiny community.

The primary cast is led by the ever-reliable Kurt Russell as Sheriff Franklin Hunt, an impressively mustachioed old lawman with a penchant for shooting suspects in the leg. Richard Jenkins plays Chicory, the aged assistant deputy, with deep humor and pathos. As Brooder, the town dandy, Matthew Fox is utterly convincing as a very handsome, very vain, very able rake/gunslinger. Patrick Wilson and Lili Simmons play the pivotal O’Dwyers with a modern slant, yet their drives, attitudes, and frustrations a perfectly within context.

David Arquette as the scoundrel Purvis reminds me of his role in Ravenous, although here is less dissipated and less amusing since his character inadvertently brings monsters to the town of Bright Hope. The troglodytes, as they are called, come in pursuit of him. They capture him, but also take Mrs. O’Dwyer and the Sherriff’s primary deputy, spurring the plot by necessitating their rescue.

There is a sense of casual heroism among the main characters, of competent men shouldering their load without complaint—the familiar Western ethos of honest, imperfect men doing what needs to be done. When Sherriff Hunt declares, “I’m riding out with Mr. O’Dwyer, because there isn’t a choice for either of us,” the immediate response of Brooder and Chicory is that they will go, as well, because they each feel a personal responsibility for what has happened and a need to make it right.

The tension in Bone Tomahawk rises slowly, like water coming to a boil. Before we ever see the troglodytes, we are on edge from encounters with other, less ghastly men. While travelling, Brooder mocks the sherriff, Chicory, and O’Dwyer for ever having married. But his own heart is broken when his horse is badly hurt when she resists being stolen by thieves in the night and he has to put her down. “Thank you, for your service,” is all he says. It is an underplayed scene, and more affecting for it. The humor drains out of the film quickly after that.

Brooder and his horse

Brooder actually develops as a fascinating character to watch. In a remarkable bit of acting, Matthew Fox shows Brooder beginning to go into shock after losing his hand during an ambush by the troglodytes. But even while shaking from the blood loss and pain, he ties off the stump and asks for the repeater rifle and dynamite. “I’m far too vain to ever live as a cripple,” he says to his companions, as he chooses how to die.

The unnamed tribe of troglodytes reminded me of the wendol of The 13th Warrior and the Carkers of Anthony Boucher’s “They Bite” in their brutality and described cannibalism. They are human but monstrous, decorated with tusks and skulls, ghostly in a coating of ashes, wielding the sharpened jawbones of horses as battle axes. They inhabit an avoided place known among the local Native Americans as the Valley of Starving Men—an area of dry dirt hillsides scraped into walls and inset with animal skulls. They do not speak–“What kind of tribe doesn’t have a name?” “The kind that doesn’t have a language. Cave dwellers”—instead, they use weird, hollow howls through bone whistles set into their throats.

While the troglodytes are made bestial, the camera does not linger on them or use them for jump scares and shock value. They are presented rather matter-of-factly, much as the townsmen approach them. The horror is understated, with relatively (if not actually) little gore. What bloodshed there is, is graphic and grotesquely believable—scalping, evisceration, dismemberment, torture, a man split in half. But this is not sexy horror movie gore. It is meant to look as real as it does.

I was never a Western fan (Clint Eastwood doesn’t count—he’s his own genre). I always preferred action and horror. But there is an everyman’s nobility to the Western genre. With the employment of stellar actors, a deeply engaging script, and some outré human evil, Bone Tomahawk becomes a film that crosses genres in a satisfying way. While not particularly frightening, it is a well-told, entertaining, and unsettling film that is grim enough to be, truly, weird.