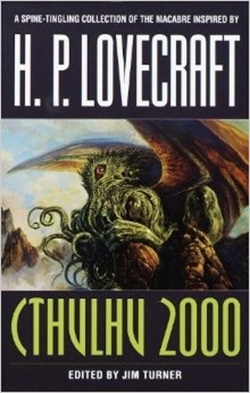 Nothing like a new year for ringing in the Old Ones! Cthulhu 2000: A Lovecraftian Anthology is one of many fine Mythos-inspired collections that have been assembled over the years. Edited by Jim Turner, Cthulhu 2000 was initially published by the legendary Arkham House in 1995 and reprinted by Ballantine/Del Rey in 1999—just in time for the Millennium (or the impending apocalypse of Y2K, as it was known at the time).  Cthulhu 2000 contains eighteen stories, many by authors we have mentioned before, written over the span from 1964 to 1992—and although none of the stories is set at the millennium, they are all meant to be relatively current events. A handful were culled from other Lovecraft-themed anthologies Arkham House had put out previously, but most of the rest came from such esteemed magazines as Interzone, Asimov’s and The Magazine of Fantasy and Science Fiction.

It’s hard to argue with those kind of pedigrees. And so, on to my notes on the contents—while all are fine reading, I have starred the ones I think are essential:

“The Barrens” by F. Paul Wilson is a plainly-written novella that places Lovecraftian elements convincingly in the heart of the New Jersey Pine Barrens.

“Pickman’s Modem” by Lawrence Watt-Evans is a bit of joking Mythos whimsy, an unexpected approach to cosmic horror.

“Shaft Number 247” by Basil Copper is a tight, guarded, claustrophobic story set in an underground—possibly underwater– warren of tunnels and shafts. In tone it reminds me of John W. Campbells’ Who Goes There?

“His Mouth Will Taste of Wormwood” by Poppy Z. Brite is lush and filthy, and rotten with the Louisiana swamps. Overall the story is more vampiric than cosmic, but it approaches life and death as much less rigidly defined states, both desirable for different reasons.

“The Adder” by Fred Chappell introduces a new type of corruption wrought by the Necronomicon, one based on proximity rather than familiarity.

“Fat Face” by Michael Shea uses rich, visceral Lovecraftian language in this tale of a bubble-headed hooker’s encounter with a shoggoth in modern Los Angeles.

* “The Big Fish” by Kim Newman brings in Geneviève Dieudonnè from Anno Dracula to help a private detective who has run up against Dagon and the Deep Ones. Noirish, funny, and scathing, Newman incorporates studio Hollywood, wartime xenophobia, and organized crime into a lovely bit of Lovecraftiana.

“‘I Had Vacantly Crumpled It Into My Pocket…But by God, Eliot, It Was a Photograph from Life!'” by Joanna Russ is another story that is not overtly within the mythos, yet evokes the same sense of the beyond—gaping, hungry, and utterly inhuman. 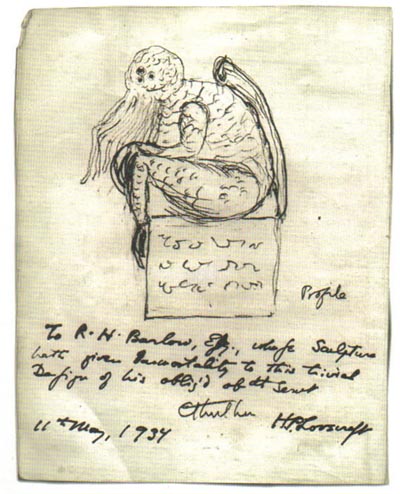 “H.P.L.” by Gahan Wilson is typically, blackly funny, with a still-living Lovecraft, a resurrected Clark Ashton Smith, a Cthulhu Kids TV show, and some human sacrifice thrown in for good measure.

“The Unthinkable” by Bruce Sterling (normally known for his cyberpunk) brings Lovecraft into the Cold War, reframing the nuclear bomb as a weaponized Old One.

* “Black Man with a Horn” by T. E. D. Klein—a novella I highlighted once before in my review of The Year’s Best Horror Stories, is a chilling interpretation of Lovecraft’s mythos made even more remarkable when set among other Lovecraftian tales. Insidious, dark, and haunting.

“Love’s Eldritch Ichor” by Esther M. Friesner is an unabashedly silly use of the Old Gods to help negotiate a contract with a predatory romance publisher, and a goofy break from all the cosmic despair. I don’t generally go in for funny spec, but Friesner is laugh out loud excellent.

* “The Last Feast of Harlequin” by Thomas Ligotti is perhaps closest in style, vocabulary, and mood to Lovecraft’s originals—doomed and sullen and more subtle than you might at first think. This story uses clowns in their older sense, not as jokes but as warnings.

“The Shadow on the Doorstep” by James P. Blaylock is suggestive and moody, but without any particular plot or resolution is merely a dark vignette.

“Lord of the Land” by Gene Wolfe is as surreal and compelling as one could want, with an ancient Egyptian god lingering in the American heartland. The sweep between dreamland and real horror is classic Wolfe.

“The Faces at Pine Dunes” by Ramsey Campbell is suitably indistinct and creepy, with Campbell’s hallmark slippery language and barely described horrors.

“On the Slab” by Harlan Ellison retells the myth of Prometheus with his unmistakable scalpel wit and a peculiar and dismal conclusion.

* “24 Views of Mt. Fuji, by Hokusai” by Roger Zelazny is the remarkable story that drew me back to this anthology. Gorgeous, dreamy, poetic, highly structured and literate and mannered and mythic—it is the story of a personal quest tied up in Japanese art, government agents, and cyberpunk elements.

In his introduction, also titled “Cthulhu 2000,” Jim Turner posits the question, “Why is it, one wonders, that a reclusive writer of weird-fantasy stories, who during his lifetime couldn’t even earn a decent living, now possesses the power to inspire, and even to affect the lives of, readers around the globe?” (xi). He goes on to answer himself with references to cosmic dread and a conception of evil that “conveyed no absolute meaning” (xiii), concluding that, for some authors who followed him, Lovecraft offered “a mythopoeic underpinning of appropriate magnificence and awe” (xvi). Those would be the intellectual answers. The more intuitive one is that Lovecraft inspires by the sheer possibility he opens with his various gods, monsters, and hangers-on. There are no limits. Anything can happen in this primordial atmosphere. And, as the stories above demonstrate, it frequently does.