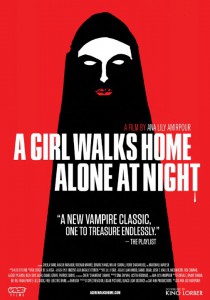 Before any more time goes by I’d like to review A Girl Walks Home Alone at Night—a strange, small, Persian-language vampire movie set in Iran but filmed in California. Written and directed by Ana Lily Amirpour, it began making the rounds of film festivals almost two years ago and was finally released online in April. So far it has only pulled in about $500, 000 at the box office. But while it isn’t a money-maker, it is a popular darling. The low-key, positive word-of-mouth about it never stopped—and for good reason.

A Girl Walks Home Alone at Night claims to be a vampire spaghetti western, and in some respects it is. But it is also a stylized horror film, a supernatural romance, and possibly even an avant garde coming-of-age story for our human hero. This is one of those weird, beautiful little movies that straddles classic and experimental in interesting ways and is well worth the hundred minutes it will take to watch it.

In broad strokes, A Girl Walks Home Alone at Night takes place in a decaying western town where the life of a young man rapidly losing hope intersects with the existence of a vampire willing to show a measure of mercy. The town, called simply Bad City, is a bleak landscape of factories, tiny houses, packed apartment blocks, chain link fences, and graffiti. There is a railroad, and oilfields, and flat, dusty stretches of scrub. Bad City has its wealth, but it doesn’t trickle down.

Amirpour plays with incongruity throughout the film. Her vampire is a predator, one who will slaughter her chosen prey with no mercy and then steal anything of value she can easily carry away. But she is also capable of letting a young boy go under the implied threat in her question, “Are you a good boy?” She spares a not-entirely jaded prostitute, telling her the shared truth “You’re sad. You don’t remember what you want. You don’t remember wanting. It passed long ago. And nothing ever changes.” And when she meets Arash, stoned out of his mind and wandering the streets dressed as Dracula, she makes the decision to bring him to her home when he tells her, “I’m lost.”

And lost he is. Arash knows he is being pulled inexorably into a criminal life, and his only chance to save himself is to get out. “Let’s leave Bad City. Come with me. Don’t leave me. Don’t leave me alone” he begs the vampire. His wants, her mercy, and the decisions they make while knowing they do not know each other are the core of the story. Desperation is a serious driver.

A Girl Walks Home Alone at Night—Arash and the Vampire

The black-and-white cinematography in A Girl Walks Home Alone at Night is gorgeous, at turns hallucinatory and starkly real. There are elements of Eraserhead, Near Dark, and Let the Right One In (the original, not the remake) in the lighting and atmosphere, and even something reminiscent of The Last Picture Show in the setting. Sheila Vand as the unnamed vampire and Arash Marandi as Arash, the young man who courts her are both luminous, beautiful creatures. It is hard to look away from any of Amirpour’s actors—even the criminal Saeed (Dominic Rains) and the aging prostitute Atti (Mozhan Marnò) are rendered beautiful in their dusty, night-ridden world.

An amazing, electronica-heavy soundtrack carries along the story’s shifting moods effectively. For example, the opening scene has Arash walking past an open trench full of discarded bodies to the distorted rhythm of a tinny, carnivalesque song slowing down like a music box in need of winding. In between the songs there are strange, still moments without dialogue that only deepen the soundtrack’s effect. Even when the characters speak with each other, the dialogue is spare, structured, and often oddly formal, with much of the emotional weight remaining with the music.

But Aminpour doesn’t stand strictly on formality. In A Girl Walks Home Alone at Night she makes clever use of several old tropes. Classic vampire postures are reinterpreted here, with the vampire girl lying awake on the bed in her basement bedroom during the days, or her black chador billowing behind her like wings while she rides a stolen, completely incongruous skateboard through a deserted neighborhood. Beneath her flowing cloak, this vampire wears jeans and a striped tee shirt. And her basement room seems to be made of remembered eighties high-school trivia—a mirror ball, not-quite Madonna and Bee-Gees posters, string lights, a turntable and records. But against the teen-aged backdrop, there is something incredibly mournful in the young vampire’s face, framed by the black chador, her dark eyes ringed with kohl, blood smeared around her mouth like lipstick.

Amirpour is skilled with these contrasts. There are ripples of playfulness, even silliness, generated by the skateboard and by the wanderings of a fat, placid cat. There are also elements of the surreal in characters like the silent man in a fancy western shirt, full female makeup, and a delicate head scarf dancing with a balloon, or the multiple unnamed people dumping bodies into the open pit in full daylight. The combination is one of carefully weighted unease and amusement.

A Girl Walks Home Alone at Night—Vampire, Cat, and Arash

In A Girl Walks Home Alone at Night, Ana Lily Amirpour has created a small jewel of a vampire movie. With understated but well-placed gore and a reliance on what is not said, she makes a movie that is at once familiar and still asks her viewer to think. Even her final scene strikes a note of uncertainty, questioning what had seemed until then a foreseeable resolution. I enjoyed the discomfort. I look forward to what will come next.