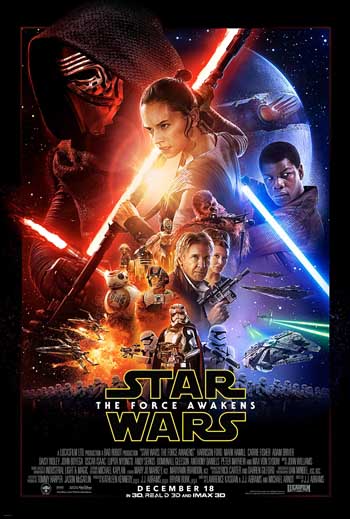 J.J. Abrams continuation/reboot of the venerable Star Wars franchise is exactly what we need after the travesties that were Episodes I, II, and III. Star Wars: The Force Awakens is spectacular, it is funny, and it is instantly relatable. Pretty darn good for an update to a forty year old space opera.

The Force Awakens digs deep into the original trilogy to remind us why these movies are so iconic and why we love them as much as we do. The wreckage of star cruisers and AT-ATs on Jakkar was beautifully done, and gave both continuity and a good visual sense of the epic sweep of the story. The Force Awakens happens on new planets, but it feels like we are returning to Tatooine, Endor, and Hoth. The legendary Cantina scene is loosely recreated, as is Luke’s vision in the cave. Sets and costumes and even actors are meant to recall the originals in all their glory– Lupita Nyong’o as Maz Kanata stands in for Yoda, while Max von Sydow lasted just long enough to resemble Obi Wan. Of course, all this goes on against the background of another fantastic John Williams score.

One reminder from the original trilogy stands out above all the others. The return of the Millennium Falcon more than anything is the bridge between the old and the new, and a spectacular bridge it is. The way the Falcon endures, the way Rey handles it, and the way Han trusts Rey with it could not symbolize the changing of the guard any more clearly.

The First Order is The Force Awakens’s revived version of the Galactic Empire, and uses most of the same structure and devices as the originals. As always, the political environment is an indecipherable mess and the dark side’s epic weapons are really poorly designed. It’s always best with Star Wars to gloss over the politics and avoid deep thoughts on the technology—that’s not what any of this is about. As in the original trilogy, the true strength of Star Wars: The Force Awakens lies in its characters

Oscar Isaac as Poe Dameron is a wonder. He brings a little crazy to every role, and as a hotshot rebel pilot, it is perfect. Poe actually reminds me a bit of Han—and that’s a good thing. Daisy Ridley’s Rey is a tough, sympathetic lead even more capable than Leia because of her newly discovered command of the Force. That, and Luke’s lightsaber. It’s a formula for another icon. As Rey’s sidekick/partner, John Boyega’s Finn is charming and funny and convincing as a developing rebel warrior. There is an easy camaraderie between Rey and Finn and promises of substantial character development built on a strong foundation.

The dark side is a little less well-defined. Adam Driver as Kylo Ren has presence, but he also looks unnervingly like Severus Snape when he takes his mask off. And although he has his grandfather’s melted helmet as a symbol of his intentions (and a good indicator of what will happen when Han finally catches up with him), Kylo has a long way to go to measure up to Darth Vader. As General Hux, Domhnall Gleeson makes an interesting foil to the conflicted Kylo Ren much as Grand Moff Tarkin was for Vader. Gleeson does his best Peter Cushing impersonation, stiff and clipped and cold, but comes off as one-dimensional where Ren is allowed some depth.

The CGI characters were a little too Disneyfied for me, and too obviously CGI—both Maz Kanata and Supreme Leader Snoke were overly elfin for my taste, with tiny noses and chins and an almost childish appearance. This was the only aspect that reminded me of the terrible prequels, and pulled me out of the action.

I did think most of the veteran Star Wars characters were actually underutilized. The audience went wild with each new appearance of a beloved familiar face. But while Han and Chewbacca had a pivotal role to play in handing over the reins to the new guard, Leia, C3PO, and R2D2 are in The Force Awakens more for nostalgia points than for plot. I hope they will play larger roles in Episode 8, when Luke makes his return.

Star Wars: The Force Awakens certainly has the Disney touch on it, with skilled emotional manipulation and more cutesy characters than usual for the films, but the Star Wars universe can handle it. The Star Wars universe still has a story to tell, and new blood to tell it with. Pretty darn good indeed.

1 thought on “Star Wars: The Force Awakens Is A New Hope (SPOILERS)”