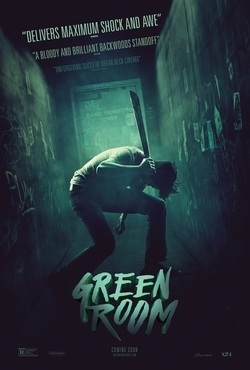 Green Room is a dark, brutal gem of a film. Written and directed by Jeremy Saulnier, Green Room debuted at Cannes in 2015 and received a limited release in the U.S. in April 2016. It is distinctly unsentimental, and its plot is stripped down to the bones. Still, it was able to make me care about its rebellious, nihilistic characters more than I first expected from such an austere presentation.

The premise is simple enough. Green Room details one harrowing night for a broke, marginal punk band who stumble onto a murder at an isolated neo-Nazi skinhead club after finishing their set. Pragmatism, idealism, and fanaticism are the drivers behind the plot, but the story does not get involved in any philosophical, good-vs-evil ideology. Instead it maintains a straightforward wrong place, wrong time vibe that allows all the characters to be (for the most part) just regular people. And I do mean all the characters. There is a surprisingly sympathetic view of certain of the white supremacists that shows them to be as human as anyone and not merely ideological bogeymen.

My first impression of the film was of gritty life, lit beautifully. Set in Oregon, Green Room makes good use of the natural landscape as a foil for what will come. The only soundtrack is human silence and the quiet sounds of nature interspersed with slashes of hardcore punk. The lack of a typical musical background makes the violence of the plot more jarring, and at the same time more mundane. There are no sonic cues—it just happens. But that sort of spare approach fits the simplicity of the storytelling well.

The dialogue is minimalist and natural, often no more than a handful of bitten-off words. One exchange, from early on:

“There’s some at every show.”

And one from well into the action:

“Shouldn’t we be panicking?”

And when a band member offers the thin hope of, “We won’t all live, but, I don’t know, maybe we won’t all die,” it matters more than any inspirational call to rally.

Almost all the interactions are as succinct. No one gives speeches. What personal declarations there are, are kept remarkably brief. Character development is done with great economy and precious little romanticism.

The Ain’t Rights—the band at the center of the action– are the relative innocents in Green Room, and they are portrayed with all their rough edges intact. Anton Yelchin (in a reminder of the talent we lost) finds a great deal of nuance in his Pat, a punk with a soft heart and nerves of steel. Alia Shawkat as Sam still has the feral look she wore as Maeby on Arrested Development, but the humor is gone. She broadcasts a clear desperation to survive. Joe Cole as Reece displays a matter of fact brutality when cornered. Callum Turner’s Tiger is rattled and vulnerable.

With the exception of the club owner, the neo-Nazi punks are a disorganized, disconnected threat. Eric Edelstein adds specific physical menace as the brutal Big Justin, while Macon Blair and Mark Webber put more sympathetic faces on characters that are normally caricatures. And Imogen Poots, especially, as Amber, plays her part with just the right note of damaged cynicism.

As the biggest star in the cast, Patrick Stewart is somewhat underutilized in his role as the cold-blooded club owner, Darcy. The sparse dialogue, chaotic action, and bleak settings do not give him quite enough support to fully flesh out his character. He adds more detail to the performance than is really required, and skews the mood with it. When Darcy shows up to take control of the disorder, Stewart gives the orders in rich, Shakespearean tones without even bothering to try for an American accent. It comes through as out of place and disconcerting. Steart is also tasked with delivering the only bit of melodrama to be found in Green Room—again, an out of place piece to his performance.

This is not a perfect movie, but it is riveting to watch the stress levels build. It is actually far too nerve-wracking to be what I’d call fun, because Green Room is as unrelentingly tense as anything I’ve ever seen. The situation the band finds itself in is grim and claustrophobic. The threat is real. Their actions are believable. The violence when it comes is graphic but not belabored, and more terrible for it. Green Room earns its keep as a serious thriller that gains a chokehold early on and never lets go. By all means, check it out.